The start of bitcoin’s recent correction was catalysed by Elon Musk, a high profile supporter of cryptocurrencies who had convinced the board of Tesla to invest $1.5 billion in bitcoin in February, criticising its energy consumption, which he called “insane”. 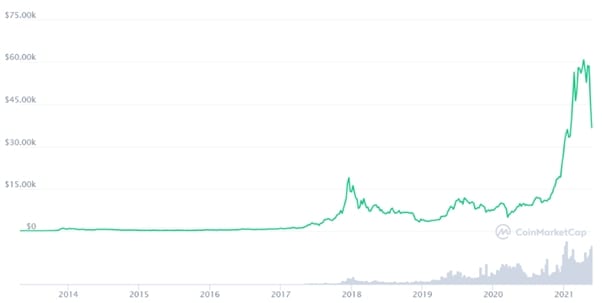 He also said Tesla’s commitment to accepting payment for its electric cars in bitcoin, and all transactions of the cryptocurrency, would be suspended until the bitcoin network started to use sustainably generated electricity. 70% of bitcoin mining is carried out in China, where most of the electricity is generated by dirty coal-burning power plants.

That was followed up by a response to a tweet that seemed to agree with the sender’s sentiment he “wouldn’t blame” Musk for now selling out of the cryptocurrency.

On Saturday Musk again added his voice to the debate around the future of bitcoin and cryptocurrencies tweeting:

“The true battle is between fiat [money] and crypto. On balance, I support the latter.”

While that was taken as a moderation of his earlier criticism of the energy consumed by bitcoin’s blockchain in the ‘mining’ process used to verify transactions (huge banks of computers compete to solve cryptographic puzzles with the first to do so rewarded in the form of newly created bitcoin), it didn’t seem to help, and perhaps even prompted, Sunday’s 14% drop in the bitcoin price. It can be presumed at least part of the market interpreted the statement as support for cryptocurrencies more generally and no longer specifically bitcoin.

Some analysts believe cryptocurrencies will one day genuinely compete with, or even replace, fiat currencies. But not in their present format because the blockchain technology of the early sector leaders like bitcoin isn’t efficient enough. There is also a strong argument that the much greater degree of anonymity bitcoin and other popular cryptocurrencies provide in comparison to fiat currencies is being exploited by criminals. There may need to be a compromise that allows for regulation and the traceability of ownership before cryptocurrencies are accepted into mainstream finance.

Bitcoin is now down around 44% from the $65,000 highs set in April when growing interest from institutional investors and a frenzy of speculative trading drove a spiralling dollar exchange value. A coordinated announcement by China’s three main financial regulators last week that banks, insurers and payments companies are to be banned from processing digital currency transactions was a further blow to the sector.

Proponents of cryptocurrencies argue that their finite supply, bitcoin’s governing protocol and blockchain technology dictates only 21 million digital coins can ever be brought into existence, makes them superior to fiat currencies. The criticism of the latter is that their control by central banks, which use money printing as an economic stimulus during downturns, allows their value to be eroded over time to the advantage of big business and the detriment of small savers.

Most of the mining occurs at vast computing farms in China, where the dominant power source is coal — the dirtiest fossil fuel.