Softbank, the Japanese conglomerate run by Masayoshi Son and often referred to as the world’s biggest technology investor, is to invest a total of $2.3 billion in British e-commerce company The Hut Group (THG). The deal will see Softbank immediately invest $730 million in new shares as part of a $1 billion cash call for growth capital.

That will be followed up by $1.6 billion investment in THG’s Ingenuity e-commerce platform, which will see it spun out as an independent business by the end of next summer. The agreement will give Softbank 19.9% of Ingenuity at a valuation of $6.3 billion.

Softbank’s initial $730 million investment in new shares issued by THG will give it a stake of around 9% of the main company before Ingenuity is spun out. Investors in the $1 billion raise, which include long-time backer Sofina, the Belgian investor, which is buying another $85 million in shares, will pay 596p-a-share. That’s the price the company’s stock closed at yesterday, following a 4.6% slide. 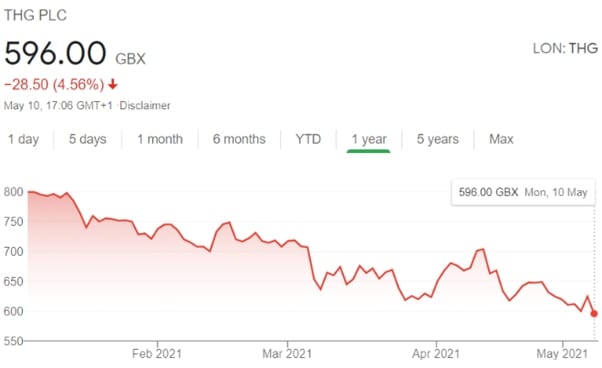 The Hut Group only went public through an IPO last September, during which shares were sold at 500p. They peaked at just over 800p in January but have since slid with the bull market for technology stocks starting to weaken.

THG is currently valued at £5.8 billion and runs over 200 e-commerce sites. Founder Matt Moulding started the company in 2004, originally selling DVDs online. The company is now perhaps most well-known for its Myprotein brand.

While THG is still considered to have plenty of room to grow as an e-commerce group, it THG Ingenuity division is seen by City analysts as potentially worth even more. The business helps other brands sell their products and services online by white labelling the same e-commerce engine THG uses for their websites.

As well as helping other companies set up e-commerce websites, Ingenuity also offers marketing strategy and services, as well as the option for it to handle other aspects from deliveries to payments. The $6.3 billion valuation of Ingenuity as an independent company agreed on between THG and Softbank is only around a third less than £5.8 billion ($8.2 billion) the whole company is currently worth.

It suggests significant confidence in Ingenuity’s potential from Mr Son, who has a reputation for making large, often successful investments on gut instinct. Softbank’s most successful investment to date has been a large minority stake Mr Son took in Chinese e-commerce giant Alibaba when the company was still relatively young. That investment has delivered a return of over $100 billion. But Mr Son has also had plenty of high profile misses, most recently a disastrous investment in co-working space operator WeWork.

Mr Moulding has represented Softbank’s huge investment in both the core company and impending Ingenuity spin-off as vindication of the corporate governance structure that gives him a ‘golden vote’ to veto any hostile takeover bids for the first three years of THG’s life as a public company.

The structure, which was criticised by some asset managers at the time, meant THG could not apply for the premium listing on the London Stock Exchange that would have seen it become part of the FTSE 100. After a review commissioned by the UK government, that rule has since been dropped as an incentive to tech company founders to opt for the London Stock Exchange ahead of rivals.

Mr Moulding argues his golden share veto safeguards investors in THG by preventing it from potentially being sold too cheaply to a big fish. The new $1 billion cash injection the share issue led by Softbank has raised will fund a new wave of the kind of acquisition Mr Moulding has fueled his company’s growth with.

Yesterday’s fundraising announcement was accompanied by news THG is to buy New Jersey-based skin creams and hair care products maker Bentley Labs in a $255 million deal. The deal counts as vertical expansion with THG, for whom Bentley develops and manufactures products for a number of its brands, one of its biggest customers.

Mr Moulding said the new financial muscle now injected will lead to the “continuation of the group’s successful, disciplined M&A strategy”, with a “pipeline of advanced opportunities”, already in place.

With bond yields at historical lows, they are not a particularly attractive investment for... END_OF_DOCUMENT_TOKEN_TO_BE_REPLACED

Most of the world’s investment capital is held in the stock of companies known... END_OF_DOCUMENT_TOKEN_TO_BE_REPLACED

It’s not so long ago millennials and Gen Z were being criticised for spending... END_OF_DOCUMENT_TOKEN_TO_BE_REPLACED

After a year that strongly favoured risk-on investments as stimulus cash flooded markets and... END_OF_DOCUMENT_TOKEN_TO_BE_REPLACED