20% Bitcoin rally on Amazon cryptocurrency clue runs out of steam

A strong rally in the Bitcoin price that saw it gain 20% at one point yesterday appears to have run out of steam. The leap in the Bitcoin price came after a period of steep declines that have wiped out about half its value since mid-April when the cryptocurrency was worth around $64,000. The climb began on Sunday evening when a newspaper advertisement placed by Amazon for someone to“develop Amazon’s digital currency and blockchain strategy and product roadmap”, was spotted.

The job ad went on to list the requirement for experience in “central bank digital currencies and cryptocurrency”. 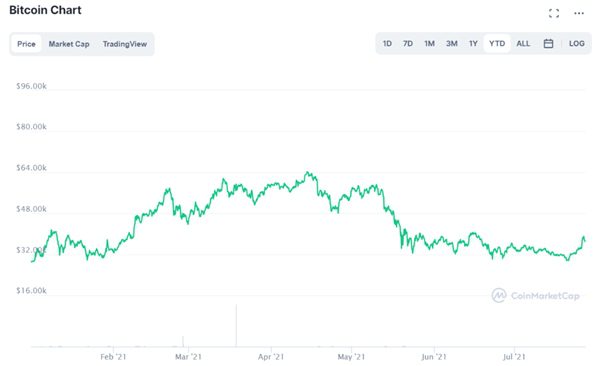 The role, part of the e-commerce and cloud computing giant’s Payments Acceptance and Experience team, quickly saw many conclude Amazon is preparing to introduce cryptocurrencies as a means of payment. By Monday morning the result was Bitcoin had added a fifth to its value and surpassed the $40,000 level before it fell back to a gain of around 10.5%. As of Tuesday morning, the Bitcoin price is a little over $37,000.

After a lull in positive news seemed to indicate Bitcoin had lost momentum in its struggle to break into mainstream finance, optimism over which fuelled the rally that drove the cryptocurrency from $7000 to $60,000 between last year and this spring, there has been a new flurry of endorsements.

Tesla co-founder Elon Musk, whose comments have often been the catalyst for Bitcoin price swings in recent months, said the electric car maker would “most likely” start to accept payment in Bitcoin soon. It halted its policy of accepting the cryptocurrency in May, leading to a price drop, on concerns of the environmental impact of the amount of electricity its blockchain technology system consumes. Musk has now said Tesla has performed due diligence on how much renewable energy is used and appears to be satisfied it makes up a significant portion of the network’s energy consumption.