Introduction
Well, the year is almost over once again. As Christmas and a New Year approaches, it is customary to reflect on the year gone by and plan for the one ahead. While the past is never fully indicative of the future, particularly in the world of investment, what has already happened can offer clues as to what we might expect ahead. With that in mind, let’s take a look at the UK’s property market’s 2017.

While the past few years have been more or less positive for property sales and rental prices across the country, 2017 has been more of a mixed bag. In a market that has always been cyclical, it is inevitable that the boom times will slow eventually and perhaps even bring a market downturn. Some investment properties will have seen strong sales value growth this year and others slightly disappointing returns against the backdrop of recent times.

Some localised areas, such as prime Central London may even have seen drops in value and the rents commanded.

Generally, the southeast, which has been the star property market performer has had a quieter 2017 than we’ve grown used to. Some new stars have been born further north and, unsurprisingly, property investors have shown signs of migrating to follow the investment returns.

Let’s take a whistle stop tour of the country and see where property and rental prices have flourished and where they have stagnated. Hopefully the Ghost of the Year Past will offer some insights into which UK regions might hold interesting pickings when it comes to looking for investment properties, or selling them, in 2018. 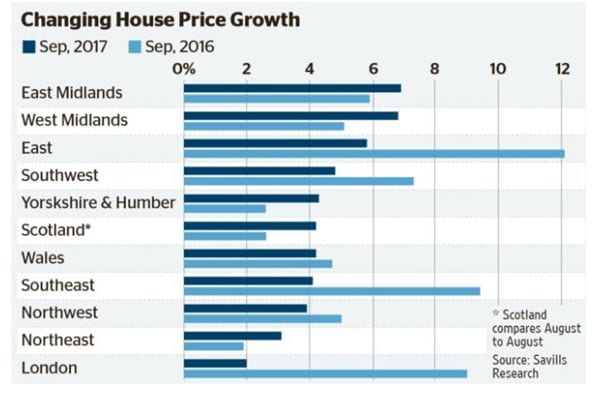 East Midlands
Seemingly one of the biggest beneficiaries of London’s affordability squeeze, the East Midlands has been one of the UK’s best performing regions this year when it comes to the property market. Infrastructure improvements such as new train stations and direct, fast lines into London, as well as good school options and some lovely smaller towns have tempted many London residents north.

It’s possible to live in the East Midlands and still work in London and the southeast. Indeed, many seem to now be taking that route in the interests of being able to afford a different class of property for their families than would be possible in London. The growing trend of allowing employees more flexibility to work from home for at least part of the week is also making the lifestyle of the commuter less arduous than in years gone by. Savills data indicates that house prices in the East Midlands have risen by 6.9% this year.

West Midlands
Home to Birmingham, the UK’s second largest city, and also with high speed rail links to London and the southeast, the West Midlands property market has boomed this year. The smart property investor also looks for cheaper locals that they have good reason to see a bright future for. While the super high-speed HS2 rail link to London is not set to be operational until 2026, another eight years, investors already seem to be betting on it. Run down areas in central Birmingham with easy access to New Street Station are already seeing investor interest and Ladywood, one of the most deprived spots in the country, saw property prices jump 17% between July 2016 and July 2017.

The Times noted that one West Midlands office of Strutt & Parker reported a 30% increase in house sales and smaller West Midlands towns such as Shrewsbury and Hereford are also attracting buyers from further south.

Yorkshire
While not a star performer and also not commutable from London, Yorkshire’s property market hasn’t had a bad 2017. House prices have risen a little over 4% this year, compared to 2.3% in 2016. The improvement in price rises year-on-year is one of the strongest in the whole of the UK, albeit starting from a low base. If this trend continues, Yorkshire could be an interesting area to pick up lower value investment properties with plenty of price growth potential still remaining in comparison to more expensive regions.

While the market for properties located in the countryside has generally been stagnant across the UK, this is, say a local Strutt & Parker office, a strong niche for Yorkshire. Rural Georgian properties are in particular demand.

Northeast
Traditionally one of the regions property investors pay least attention to, prices in the northeast of England have also been among the slowest to recover from the financial crises. They have still not returned to their pre-2008 levels. However, this might be an opportunity with greater room for further growth in comparison to other regions.

Like Yorkshire, the northeast has seen a jump in the pace of house price growth this year from a low base. 3.1% growth has been recorded this year compared to 1.9% in 2016. Worth keeping an eye on for bargain properties with further room for price growth.

Northwest
While showing stronger house price growth than the northeast this year, with 3.9%, the northwest is going in the opposite direction, down from 5% in 2016. That’s despite some areas of the region showing among the best property price growth in the UK. Trafford in Greater Manchester saw house prices rise 9.1%, Manchester was up 8.6% and Burnley, a commuter town for Manchester, a whopping 14%. However, that shows cause for concern in other areas. Alternatively, a trickle-down effect might mean a good 2018 is in store for parts of the region that had a poor 2017.

Scotland
Scotland’s different areas have also had a mixed bag of a 2017. With North Sea oil investment low, Aberdeenshire’s property prices have been among the worst performing in the UK this year. However, nowhere in the entire country did properties sell faster this year than in Edinburgh, where the average time on the market was just 41 days.

Prices in Scotland’s capital have risen 7.6% this year while those in Glasgow, the bigger city, have jumped by 7.9%, making it the best performing city in the UK. The Highlands have also performed well, especially at the upper end of the market. Overall, Scottish property prices rose a little over 4%, compared to around 2.5% in 2016.

London and the Southeast
The star turn of much of the past decade, house prices in London and the southeast finally hit the buffers this year. Prime central London seemed to defy the financial crises as its safe haven status saw it attract affluent buyers from around the world. However, this year it has been the capital’s worst performing sector, with price growth across London dropping to just 2% from 9% last years.

However, there are some areas of London still performing relatively well. They also tend to be the cheaper areas. Barking and Dagenham in east London saw house prices rise 6.7% this year and Bexley in the southeast of the capital gained 5.8%. Greenwich also saw a 5% increase. Newham saw the biggest fall in growth rate, down to 1.6% from 16% last year. Possibly a warning to property investors not to jump on the bandwagon in an area that has just seen double-digit growth!

Sluggish price growth in the capital itself has also had a knock on effect for many of the southeast’s commuter towns. While the east and southeast saw prices rising by over 10% in 2016,that has halved to 5.8% and 4.1%. Still not bad but a potentially worrying trend.

Southwest
Like its neighbour to the east, the southwest also saw the rate of house price growth drop off over 2017. Growth of over 7% last year slowed to a little under 5% this year. However, particular areas have proven to be an exception to the rule with Gloucestershire’s Stroud, Dorset’s Christchurch and west Somerset all seeing strong demand and limited supply according to local agents. The market in the southwest is also reputedly being driven more by first time buyers than investors compared to previous years.

East Anglia
Another region with slowing growth, property prices increased by 5.8% this year compared to 12.1% last. PNB Paribas research also indicates that trend will continue in 2018 before the pace of growth accelerates again the following year. However, Suffolk’s Forest Heath and Tendring in north Essex have had a good year. Possibly a region for bargain investment properties next year if growth does indeed pick up again in 2019.

Wales
Moving west, house price growth in Wales also slowed this year, 4.2% compared to 4.7% in 2016, though relatively modestly. There has also been quite a large degree of variation within the principality. Carmarthenshire has seen a very poor year while Cardiff, its commuter region South Monmouthshire (which is equally close to Bristol) and holiday villages in Pembrokeshire all did well.

Northern Ireland
And finally, to round things off, Northern Ireland. The region’s property market suffered particularly in the aftermath of the financial crisis and is yet to fully recover. However, Belfast has had a reasonable 2017 with prices up 4.5%. The east part of the city has performed particularly well. Similar growth is forecast for the next few years.

Trump Tax Reforms: Should You Be Investing In US Equities?

What Does The Future Of The Commercial Property...

A by-product of this adoption is increased access to the asset, with at least... END_OF_DOCUMENT_TOKEN_TO_BE_REPLACED

At the annual meeting of shareholders of the Daily Journal Corporation, Munger explained why... END_OF_DOCUMENT_TOKEN_TO_BE_REPLACED