At the end of the last week before Christmas another calendar year of investing is, bar a couple of full and half days that can be anticipated as relatively uneventful, drawing to a close. 2018 hasn’t been a great year for those investing online in London Stock Market listed equities.

The FTSE 100, the index that tracks the 100 largest UK-listed companies by market capitalisation, is down 7% since the beginning of January and at this late stage is unlikely to shut up shop at lunchtime December 31st too far from that level.

Yes, it’s fair to say 2018 won’t go down as a good one for UK-centric investors. In fact, globally it’s been a tough one. The MSCI World Index has shed close to 10% since the New Year bells. After the phenomenal returns generated by equities over 2017, this year was also expected to be one of greater volatility. In some ways the decline can be viewed positively. There hasn’t been a ‘crash’ and the correction could act as a safety valve releasing pressure and offering hope that there might be a ‘soft landing’ to conclude an equities bull run that has spanned a decade.

And while it has been a struggle across the board, there have been 2018 winners. Investors in Ocado, the online groceries and logistics technology company, have banked returns just shy of 100%. Others have also done well. Only 27 companies had, by mid-December, realised a positive return for the year but those who played their cards right and had those in the list below in their investment portfolios this year will have been grateful.

Ocado’s phenomenal year has come as a result of signing a major partnership with U.S. groceries giant Kroger, the company’s fourth big contract over 6 months. The others were with the UK’s WH Morrison, France’s Casino and Sweden’s ICA. The deal provides Kroger with Ocado’s warehouse and delivery logistics technology and software as it seeks to compete with Walmart and Amazon. It altered how investors perceive Ocado, with it now being judged as a technology and software company rather than a groceries business. Ocado will build 20 ‘customer fulfilment centres’ for Kroger – warehouse facilities fully kitted out Ocado’s proprietary technology.

The next biggest FTSE 100 gain for 2018 was achieved by mining and steel company Evraz which is up almost 40%. Co-owned by Roman Abramovich of Chelsea fame, the Russia-founded company’s share price boom has been founded on regularly smashing analysts’ forecasts for its quarterly results. Publisher Pearson also roared back this year after spending the previous two in the doldrums following profit warnings and major cuts to its dividend. Convincing investors its digital transformation is on the right track as well as a major cost cutting programme were the main contributors to Pearson’s 2018 share price recovery as it gained over 25%. FTSE 100 pharma giants GlaxoSmithKline, AstraZeneca and Shire all also had good years with respective gains of 16.55%, 16.54% and 14.01% as of the end of the first week of December. 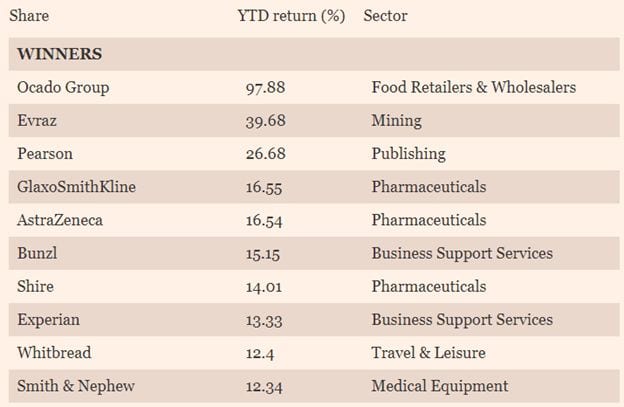 British American Tobacco (BAT) has suffered the heaviest 2018 loss, plunging almost 50% in value. A general slowdown in the market for traditional cigarettes and tobacco, as well as a new crackdown on menthol cigarettes in the U.S. has raised investor fears around big tobacco. The growing influence of ‘ethical’ and ‘sustainable’ funds which shun tobacco companies is also a trend which will not be positive for BAT and its tobacco peers. The new market for vaping products is failing to pick up the slack and the company will surely look to increase its exposure to the legalised marijuana market in coming years, which offers some hope but still involves a lot of unknowns.

Asset managers Standard Life Aberdeen and Schroders both had a rocky 2018 with market cap losses of 42.7% and 32.14% respectively. Investor nerves over Brexit are thought to have contributed to the travails of the two companies but other fundamental factors have also contributed. Royal Mail is set to lose its FTSE 100 position and be demoted to the FTSE 250 in 2019 after shedding 38.7% over the calendar year as its business model is hit by the changing face of the postal and courier market. Amazon’s move to bring deliveries in-house has proven to be a particularly hard blow. 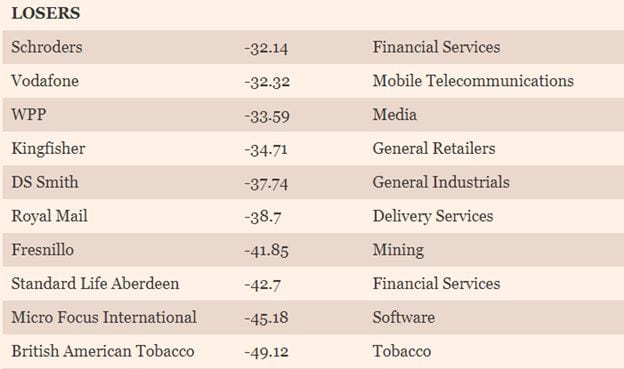 Below the FTSE 100, which companies were the 2018 winners and losers among the 250 constituents of the mid-cap FTSE 250 index? 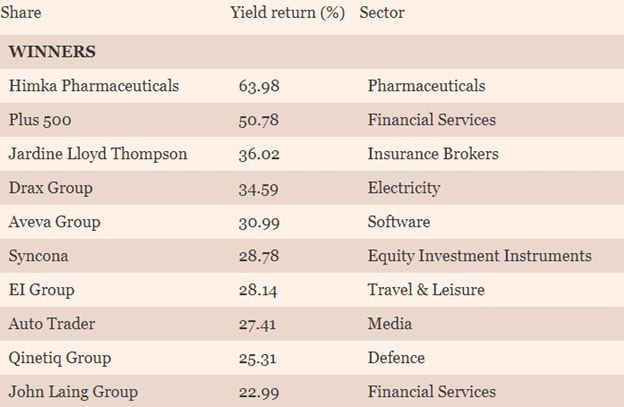 Hikma Pharmaceuticals has had a year to raise the spirits of any investment portfolio holding it with a whopping 63.98% gain. The company’s stock has had a strong end to the year also, up over 12% in the past 4 weeks alone at a time when the benchmark has struggled. Originally from Jordan, Hikma manufactures both generic and ‘in-license’ drugs. Significant growth in revenues and profits spurred the climb, aided by U.S. pharma giant Pfizer temporarily halting production of several pain management drugs.

Online CFDs broker Plus 500 was the FTSE 250’s second strongest performer. Its share price gained an impressive 50.78% despite a significant slide since peaking in August. A year of market volatility has helped drive the trading platform company, which acts as a market maker to a retail trader client base, to record revenues and profits. Other notable outperformers over the course of the year were insurer Jardine Lloyd Thompson, whose share price spiked in September when it was acquired by New York-based risk solutions company Marsh & McLennan, electric generation company Drax Group and IT company Aveva Group, which have all gained over 30% in 2018. 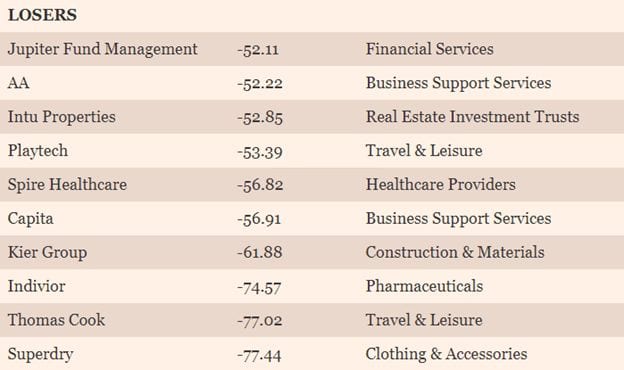 Superdry, the fashion retailer, has been on a downward trend all year. However, the company’s woes accelerated this month with a 30% nosedive on December 12th after the company released a profit warning. While mild weather was the oft wheeled-out explanation earlier this month, the real crux of the problem appears to be deeper. Superdry’s profit margins have been sliding for some time and online sales growth has been poor in combination with the expense of opening new stores also having a negative impact on the accounts. The company’s management hope the introduction of a wider range of products, including kids’ wear, will help in 2019 but any investors still holding on could be forgiven for wondering whether they shouldn’t have sold a long time ago. The stock is down 77.4% for the year.

Thomas Cook has fared only fractionally better, suffering a 77.2% loss to its market capitalisation. The tour operator suffered from higher fuel prices and the long, hot summer in Western Europe which led holidaymakers to delay their bookings. That, combined with suspected overbooking of hotel rooms in competitive locations, meant heavy discounting hit profits hard. Investors are now also very concerned about the cost to the company of insuring its high levels of debt against default. A year to forget for the 177-year old package holidays veteran.

Also with a loss well into the 70 percent territory at 74.57% is pharmaceuticals company Indivior. A specialist in medications to treat addictions, sales and profits have slumped this year as the company has fought what appears to be a losing court battle with U.S. peer Dr Reddy’s Laboratories. The latter wants to bring to market a generic version of Indivior’s top selling opium addiction treatment Suboxone Film. U.S. courts have consistently ruled in favour of DRL and a temporary injunction on it selling its generic alternative has now been vacated.

Well, that was the rundown of the year’s biggest winners and losers. For those of you investing online, hopefully you had some of the former in your ISAs, SIPPs and stock broking accounts and few, if any, of the latter. And if you did have a few that bombed, hopefully a well balanced portfolio softened the impact and you have kept your eyes firmly on the long term horizon. Good luck again in 2019!

The Future of Transport: New Technologies That Will Take Us From A to B In Coming Years

Despite the ravages of the Covid-19 pandemic the UK’s renewable energies generation capacity grew... END_OF_DOCUMENT_TOKEN_TO_BE_REPLACED