A dramatic 25% crash in the Bitcoin price yesterday prompted the UK’s financial regulator, the Financial Conduct Authority (FCA) to issue a warning to investors in the cryptocurrency they “should be prepared to lose everything”.

The value of the original and still dominant cryptocurrency has multiplied several times in recent months. Having started 2020 at around $5000, Bitcoin fell to $3000 in March. After a relatively steady recovery from that low, Bitcoin has been rapidly rising in value since early autumn.

Gains accelerated over the latter part of the year, and early days of 2021, taking the exchange value of single Bitcoin above first $20,000 for the first time ever, before topping $40,000 over the weekend. Yesterday’s flash crash, which has again given way to new gains since, is put down to speculative investors taking out profits after the $40,000 was breached. 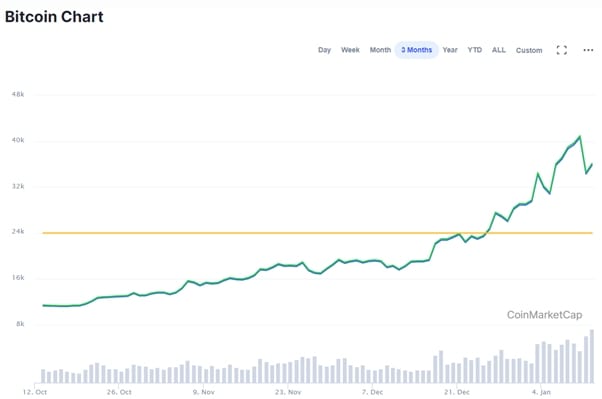 Many analysts are convinced cryptocurrencies are now starting to gain a foothold in mainstream financial markets, with new trading infrastructure encouraging institutional investors into taking Bitcoin positions. But the FCA believes that retail investors caught up in the euphoria of what currently looks like a new price bubble for the digital asset need to understand the high level of risk they are taking on, and only put money on the line they are prepared to lose.

Yesterday, the FCA released a statement that said consumers were at “high risk of losses”, when investing in digital currencies, other “cryptoassets”, and products linked to them.

Despite growing evidence that some major institutional investors are starting to take Bitcoin seriously, at least to the extent they are willing to take multi-million dollar hedging positions in the cryptocurrency, the FCE believes it has “no inherent value”.

Yesterday’s statement went on to read:

“Investing in cryptoassets, or investments and lending linked to them, generally involves taking very high risks with investors’ money. If consumers invest in these types of product, they should be prepared to lose all their money.”

Generally speaking, the FCA’s advice should be considered as good. It now does look like there is the genuine possibility of Bitcoin and other digital assets establishing themselves as part of mainstream finance. But it is far from certain. Even if digital currencies do establish themselves in mainstream finance, there is no guarantee they will be the current incumbents. Central banks, including the Bank of England, are known to be working on R&D projects for their own digital currencies.

That means any investment in Bitcoin, or other digital assets, should be treated as speculative, rather than cornerstone investments. They should be considered ‘high risk moonshots’ in a broadly diversified investment portfolio. And only if the investor can afford, and is prepared to, lose the investment in its entirety if it doesn’t come off.

As the FCA added yesterday, if unregulated cryptocurrency markets crash, there is “no guarantee that cryptoassets can be converted back into cash”.

The FCA’s crypto assets warning comes against the backdrop of increased pressure for it to do more to protect small retail investors in the wake of a number of recent scandals, including that involving mini bonds company London Capital & Finance, which collapsed last year leaving thousands of people out of pocket. Total losses were over £200 million.

British investors have been especially keen on exposure to the Bitcoin price in 2021, with pound sterling-denominated trades reaching almost £1 billion over the first week of the year. That’s despite a ban on FCA-regulated firms marketing, distributing or selling cryptoasset derivatives to UK-based retail investors. An FCA investigation found that tens of millions of pounds a year were being lost trading CFDs based on cryptocurrency price movements.