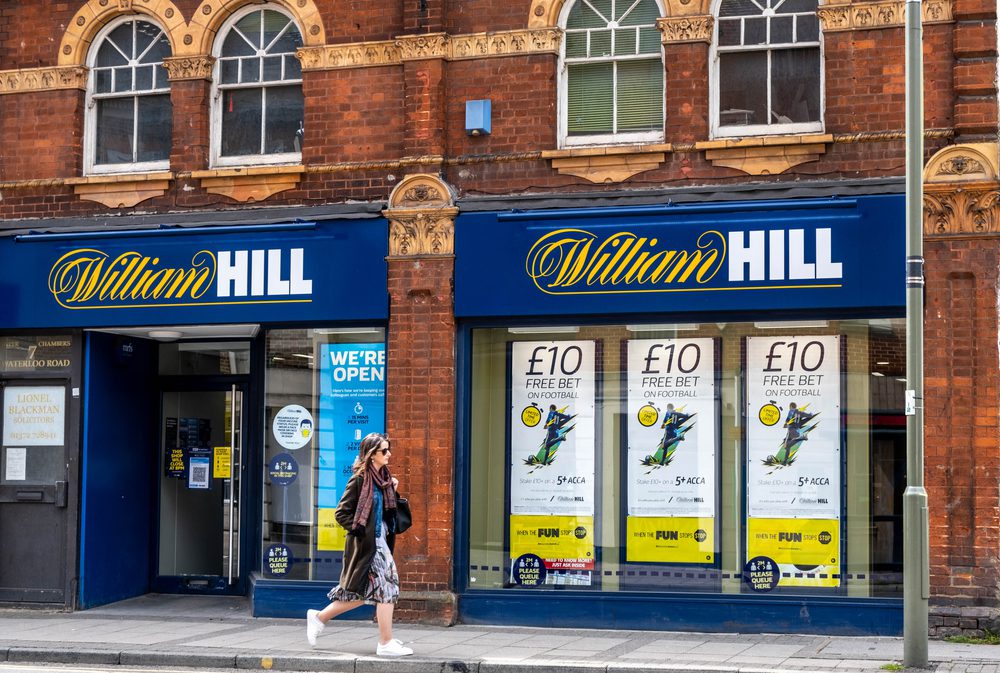 The 888 share price has given up yesterday’s 1.8% gain with a 2.5% drop in early trading today after the company announced it had won the auction for William Hill’s European operations. 888 Holdings, which is listed in London at a value of £1.5 billion, less than what it is estimated to be paying for William Hill’s online operations and 1400 betting shops.

After newspaper reports the online bookmaker had unexpectedly won the auction being run by Caesars Entertainment, the U.S. casinos giant who acquired William Hill for £2.9 billion in April, 888 yesterday released the statement confirming

“advanced discussions with Caesars Entertainment regarding a possible acquisition of the non-US business of William Hill”.

When Caesars bought William Hill, with whom it had a joint venture on the U.S. market, the casino operator made it clear it was only interested in the company’s U.S. operations and would sell of the European business. When the business was put up for sale, sector analysts predicted it would fetch a price of between £1.2 billion and £1.5 billion.

However, a combination of a boost to revenues over pandemic-period lockdowns and a spate of mergers, acquisitions and Spac-listings across the industry in recent months has been driving valuations upwards. 888 is believed to have won the auction, which private equity firm Apollo Global Management had been favourites for, by bidding over £2 billion.

Two further bidders, Advent International and CVC, had already pulled out of the auction for the William Hill brand, betting shops and online operations in the UK and Europe. Apollo, which had rivalled Caesars for the whole company before losing out on that deal, were then favourites to snap up the European business ahead of 888, despite the fact the latter could offer clearer synergies.

The William Hill brand dates back to 1936 when its first betting shops opened and the company was a relatively early entrant to the online betting market with the launch of its first site in 1998. The company expanded its online presence with the £242 million acquisition of Swedish online operator Mr Green & Co in 2018. The deal brought the Mr Green and Redbet brands into the William Hill stable and a new presence on European markets including Sweden, Denmark, Latvia and Malta as well as strengthening market share in the UK.

888 Holdings has always been an entirely online gambling company since being founded in Israel in 1997. It listed in London in 2005 and offers the core products of sports betting, online casinos and online poker. The biggest question mark over the deal for William Hill’s operations is if 888 plans to keep the 1400 betting shops or sell them off in a spin-off deal to recoup some of the outlay.

888 will presumably use some of the $114 million cash pile it has built up with the remainder of the £2 billion-plus funded by debt. The company’s chief executive Itai Pazner commented:

“We’re in a really strong position now, our products are at a good stage, ready to take on more scale, our balance sheet is clean and we’re ready to take on any interesting opportunities to boost our successful organic growth strategy of the last couple of years.”

A little over a week into 2022 we’ve already experienced some major market movements.... END_OF_DOCUMENT_TOKEN_TO_BE_REPLACED

One of the FTSE 100’s current disadvantages, when it has come to attracting international... END_OF_DOCUMENT_TOKEN_TO_BE_REPLACED

Did you know you could build wealth by investing in Lego? A study suggests... END_OF_DOCUMENT_TOKEN_TO_BE_REPLACED

With most major stock markets around the world spending time at or near record... END_OF_DOCUMENT_TOKEN_TO_BE_REPLACED

For years, Baillie Gifford’s technology funds have been driving outsized returns for the mainly... END_OF_DOCUMENT_TOKEN_TO_BE_REPLACED