The Netflix share price rallied by nearly 10% (9.6%) this week after co-CEO Ted Sarandos confirmed the film and television streaming market leader is to introduce a new ad-supported, cheaper subscription. The company also announced it is to lay off another 300 employees, around 4% of its global workforce, in addition to the 150 redundancies last month.

Netflix has been forced into a period of belt-tightening after announcing a 200,000 subscriber-strong net loss over the first quarter of 2022. The U.S. tech giant also ominously forecast expectations for the loss of a further 2 million subscribers over the current quarter that will conclude at the end of this month. 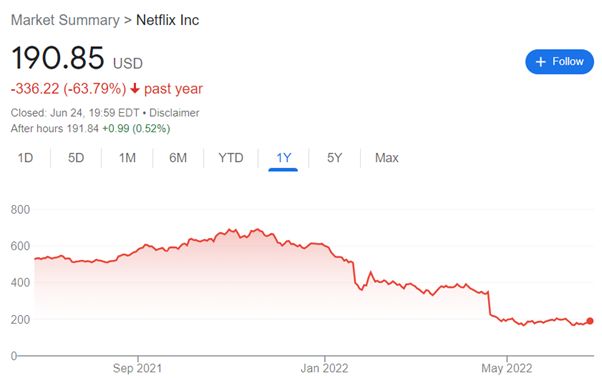 The company has faced increasing sector competition with Paramount+ its latest new rival, joining Amazon Prime, Disney+, HBO Max and a handful of other new streaming platforms jostling for market share. A more competitive environment has combined with a hangover from the subscriber boom Netflix benefitted from over the Covid-19 pandemic and spiralling cost of living crisis.

Despite the strong gains of the past week, Netflix’s share price is still down over 68% for 2022 and 64% in the last 12 months. Stock markets have generally suffered this year with investors switching into risk-off mode in the face of spiralling inflation, rising interest rates, fears of a recession and the geopolitical crisis triggered by Russia’s invasion of Ukraine.

Growth stocks like Netflix whose high valuations were heavily reliant on the value of future revenues have been hit hardest. No recognised member of Wall Street’s Big Tech cabal has escaped punishment this year with even the hugely profitable Apple, Microsoft, Alphabet and Amazon all seeing their valuations slide by between around 20% and 30%.

But all of those other tech companies have diversified revenue streams, bank profits which dwarf those of Netflix and are sitting on huge cash piles. The more narrowly focused Meta Platforms (Facebook, WhatsApp and Instagram) which still relies exclusively on ad revenue generated from online advertising on its social media platforms, has also been hit harder, losing half of its value this year.

But among Wall Street’s established, profitable Big Tech stocks, Netflix has suffered the steepest fall in its valuation. But it is still profitable, even if it has taken on significant debt investing in its original content catalogue. And it is still the international market leader by a distance in a growing content streaming market.

Even if the competition is hotting up, Netflix still offers subscribers by far the biggest and most diversified catalogue of film and television content available on the market. And the overall value of the video content streaming market is also expected to keep growing strongly for the next several years. Even if annual growth is forecast to drop into the high single figures in future years. 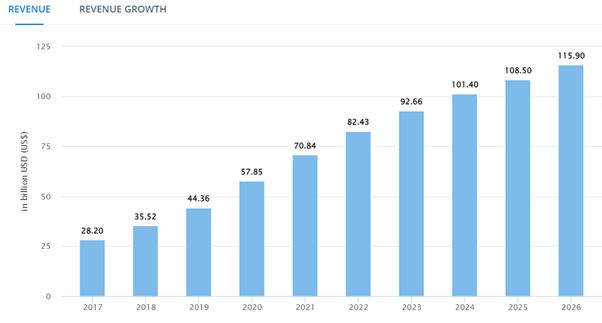 In that context, there are numerous analysts to have been left with the feeling that while the Netflix share price may well have been over-inflated during the pandemic and due a correction, it has been over-sold. Which could make the stock attractive at its current price of $190.85, compared to the record high of $690.31 reached as recently as October last year.

As a company, Netflix is faced with a transition period over the next few years. For the past decade, it has been a high growth company with investors focused on subscriber numbers. The recent dip notwithstanding, it has done exceedingly well on that score, attracting around 220 million paying customers globally.

Netflix established its market-leading position by investing heavily in its content catalogue, first by buying up the rights to popular television shows and films and then pouring hundreds of millions into exclusive content. That investment was necessary to establish a market leading position against its historical rivals Amazon Prime, which benefits from the deeper pockets of its parent company, and Hulu in the USA.

Netflix’s investment in its own exclusive content catalogue also helped compensate for the loss of popular shows like The Office, The Simpsons and Friends. When deals for the rights to these shows and many hit films have ended over the past few years their owners have chosen not to resell them to Netflix. Mainly because they planned or had already launched rival streaming services like Disney+ (The Simpsons) and HBO Max (The Office and Friends).

Netflix will continue to show third party content it acquires the rights to. But with the bulk of the most popular legacy television and film shows now available exclusively on competitor platforms launched by or otherwise associated with rights holders, it will rely ever more heavily on its own exclusive content.

That means continued investment, the expected budget for this year is $17 billion, which will put a strain on profitability. But most analysts expect the company to continue to be a major player in the video streaming sector.

The approach has also produced some of Netflix’s biggest hits across international audiences, like the South Korean dystopian thriller Squid Games and the film Parasite, another Korean production that won the 2020 Academy Award for best picture – the first ever ‘made for streaming’ movie to do so.

Netflix is also, like many of its streaming platform rivals, making a push into sport. It has just lost out to Disney-owned ESPN, the current rights holder, in a bid to acquire the F1 rights for the USA. But having made one big move for prestigious sports rights, even if it ultimately failed, it signals a shift in strategy for a company that hasn’t previously shown an interest in competing for sports audiences.

Over the next year or so, Netflix’s share price is likely to be most influenced by the success of its launch of the planned lower-cost ad-supported subscription. It’s a big call that reverses the trend of the last decade away from linear television programming supported by ad revenue in its pursuit of new growth.

It will take Netflix at least a year or two to roll out a new ad-supported platform globally and in the meanwhile, especially if its forecast of losing another 2 million subscribers this quarter turns out to be accurate, the share price could potentially face further pain. But there is also a suspicion that the stock has generally been oversold and will eventually reclaim some of the huge losses of the past several months.

How much of that loss of share price is reclaimed will most probably rely on take-up of the new ad-supported cheaper membership tier. There is huge potential there with the company estimating around 100 million viewers have been accessing the platform via shared passwords. That’s been clamped down on recently and will continue to be because Netflix is determined to monetise those 100 million viewers contributing nothing to its revenues.

If a big enough chunk of them opt for continued access at the cost of watching ads, the company’s revenue growth could quickly return to healthy levels again. And that could see some strong upside for the Netflix share price in the context of its currently deflated level.