After a remarkable run is it finally time to lock in profits and sell Amazon stock?

Unless you were lucky enough to do so on or very close to March 8 2021, anyone who has invested in Amazon stock in the past year has lost money. The Amazon share price has lost 10.5% over the past 12 months and almost 20% since its all-time high on November 19 2021. 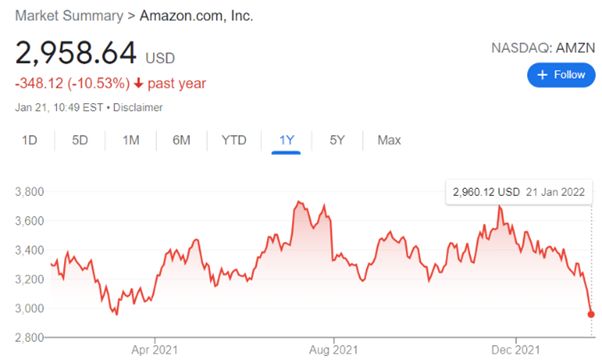 That’s about as good as it is ever likely to get for a stock market investment return. A lot of investors, institutional and private individuals, have made a lot of money from investing in Amazon stock over the years.

There have been very few moments in time since Amazon’s public markets debut in 1997 that buying the online retailer and cloud computing giant’s stock would not have proven to be a very good decision. And most of those rare periods have been over the past 3 years.

This month it became public knowledge that two managers of large British funds had recently sold off large amounts of shares in the company. The 19.8 billion Scottish Mortgage, the UK’s largest investment trust, reduced its portfolio allocation to Amazon from 9.3% to 2.4% between March 2020 and November 2021. Stephen You of the £1.1 billion Blue Whale Growth fund went a step further and sold all of the 3.35% allocation its portfolio had dedicated to Amazon stock. Scottish Mortgage divested itself of the shares between March 2020 and November last year while Yiu sold the stock in June last year.

Does professional fund managers who have made considerable profits from investing in Amazon stock are selling out or reducing their exposure to the company tell us something? Should investors consider locking in gains made on an investment in Amazon stock now buy selling and reinvesting profits elsewhere? 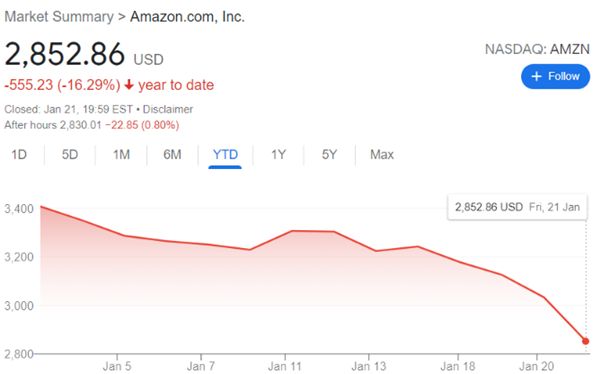 Amazon’s just had its worst week in over four years with the stock down 12% over the 5 days starting Monday January 17. The share price lost just shy of 6% on Friday alone and the company’s market capitalisation is down over 16% so far in 2022, less than a month in.

None of those figures sound good but to put them in perspective, the company is still up over 240% in 5 years and almost 60% since the bottom of the Covid sell-off on March 13 2020. The whole tech sector has suffered a correction since the beginning of the year and it was always likely interest rate rises and the prospect of more to come this year was going to hit tech growth stocks.

Amazon stock is expensive, there is no denying that, but its still growing fast. Its cloud computing division AWS is the market leader, hugely profitable and still with a vast amount of potential growth to come as the world moves onto the cloud. Most investors are worried about the slowing growth of the online retail side of the business, which is also low margin in contrast to AWS.

It is often underappreciated just how important AWS is to Amazon. In 2020, it representing only 12% of the companies revenues but accounted for nearly 60% of operating profits. If AWS continues to grow, and all the evidence suggests it will and for some time to come, Amazon’s valuation might not be that crazy afterall.

So is its drop this year so far just a result of being caught up in a general tech sell off provoked by interest rate concerns and a sluggish earnings season after a period of rapid growth? Or are investors becoming wary a deeper malaise might be setting in and the company’s highest growth days are already behind it, despite AWS?

Why might it be a good time to cash in all or part of an Amazon holding?

Tom Slater, the Scottish Mortgage joint manager, said one reason why the fund has drastically reduced its exposure to Amazon is that founder and long-time CEO Jeff Bezos has stepped back from day-to-day involvement. He said:

“We are wary that Jeff Bezos stepping back from the chief executive role may reduce the company’s appetite for bold experiments.”

Others are turned off by the ecommerce business’s low margins, especially in a high inflation environment expected to reduce purchasing power this year.

Another concern is that Wallmart is becoming a greater competitive threat online in the USA and that might signal the beginning of a more general international decline in the level of dominance Amazon has enjoyed in ecommerce over the past decade.

The Bear arguments for selling Amazon stock can be summed up as:

Why you should not take any decision to sell lightly

But not everyone is convinced Amazon has had its day in the sun. There are still plenty of Bulls who see room for significant future growth. One is funds and stocks research company Morningstar’s Dan Romanoff who sees Amazon’s “long-term intrinsic value” as $4100.

As the share price is currently around $2853, if he’s right, that would leave plenty of upside left for investors.

Romanoff believes Amazon Prime, AWS and advertising will drive Amazon’s growth over the next decade and it will to generate large profits and positive cashflow thanks to its dominance of the e-commerce and cloud computing markets. While Bears see an era of new competition for Amazon online, Bulls point to the unparalled infrastructure and systems the company has invested in over the years.

Amazon may have built a wider moat around its position of market dominance than some appreciate. Amazon Prime is proving extremely effective at keeping consumers locked in to Amazon’s ecosystem. The company’s strategy has been to add so much value into the Prime subscription, streaming, free delivery, free e-books and more, that holders feel they just can’t justify cutting it.

The strategy is proving effective in keeping Amazon Prime members, of whom there are over 200 million worldwide, buying products from Amazon rather than competitors who can’t match the advantages Amazon’s phenomenal scale can confer.

Amazon’s advertising business is also becoming more importantand continues to scale and a growing number of marketers are realising the value in the unparalled trove of consumer data its algorithms are fed by.

Romanoff believes that if AWS, advertising and subscriptions can continue to generate higher margins than the corporate average in their markets, that will see Amazon’s operating profit and earnings per share to grow at a faster pace than revenue due to improving margins.

In summary, the arguments for keeping the faith in Amazon stock are:

There are  both reasonable Bull and Bear arguments for Amazon stock in early 2022. It might be a turbulent year for tech and growth stocks as a whole but Amazon’s long term prospects do look solid. Many investors may choose to follow the high profile fund managers who have opted to bank some of the huge profits Amazon has returned over the years and reduce their exposure to the tech giant.

But a majority are unlikely to sell out of the stock altogether. And may well be selling now to potentially buy back in if there is a significant correction ahead for Amazon or the tech and growth sectors more broadly.

Given the advantages its scale now offers in its two key businesses it would take a brave investor to be to pessimistic about Amazon’s future even if 2022 has started badly.