After years of stellar returns turned sour in 2021 have the hugely successful Baillie Gifford tech growth funds past their sell-by-date?

For years, Baillie Gifford’s technology funds have been driving outsized returns for the mainly British retail investors. The Edinburgh-based asset manager’s flagship fund, the £20 billion Scottish Mortgage Investment Trust, has returned almost 325% over the past five years. That headline grabbing performance, backed up by impressive gains across the rest of its portfolio, has attracted £10 billion of capital from mainly UK-based retail investors.

The success of its tech-centric investment products has seen Baillie Gifford become the UK’s most popular investment manager over recent years. But it now finds itself in the unaccustomed position of approaching the end of 2021 as one of the year’s worst performing investment managers. 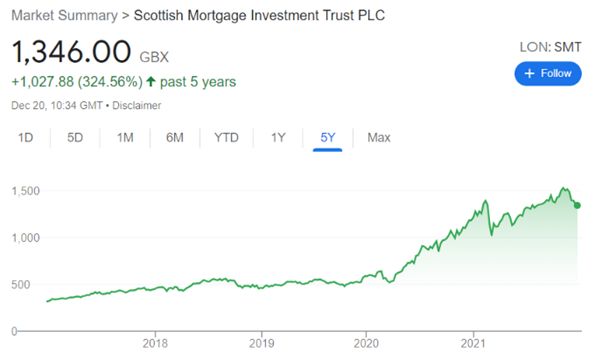 “outperform (after deduction of costs) the S&P 500 Index, as stated in Sterling, by at least 1.5% per annum over rolling five-year periods.”

While Baillie Gifford, with some justification, would argue there is a reason why the stated aim is outperformance over any given five year period and not year-to-year, 2021 has undoubtedly been a disappointment for investors in the fund. They’ve lost 0.5% for the year-to-date while the S&P 500 has returned almost 25% over the same period.

The performance of the investment manager’s UK-focused equity funds, UK Equity Focus, and UK Equity Alpha, hasn’t been much better. They are down 1% and 3% respectively against a market up 15%. But the worst of the bunch has been the Global Discovery fund which has lost investors 20% in 2021 while global equities have gained 22%.

The hugely popular Baillie Gifford investment trusts have also had a terrible year. The flagship Scottish Mortgage trust, which can invest up to 30% of its portfolio in private companies, is up 10.3% for the year. But its benchmark index, the FTSE All-World Index, is up by almost 14%.

The US Growth Trust, which counts e-commerce tech platform Shopify, payments solution Stripe, Amazon, Netflix and website hosting company Cloudflare among its top 10 holdings,  is down 2% while the tech-centric Nasdaq is up almost 20%. The Edinburgh Worldwide trust has lost 21% and Keystone Positive Change Investment Trust is worth 6% less than it started the year. 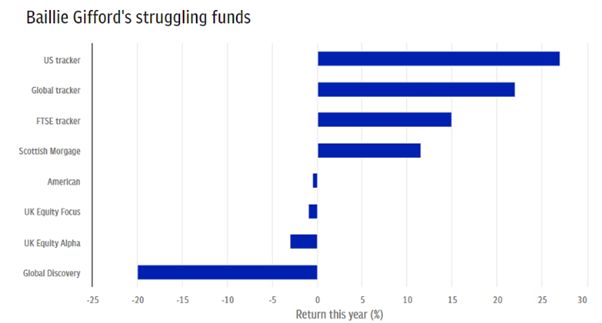 Despite a year during which Baillie Gifford has seen its performance flip from being one of the consistently best fund managers to become the worst-performing fund manager in the UK, its investment trusts and funds have remained popular. Interactive Investor, the UK’s second-largest DIY investment platform, reports 5 of the company’s investment trusts and 4 of its funds have remained on its list of most bought funds throughout the year.

Baillie Gifford funds have enjoyed huge success with a strategy of investing in young technology companies before they hit the big time. Some of its recent success stories include Tesla, Amazon and the vaccines biotech company Moderna. It only takes the valuations of a few of these companies going into the stratosphere every few years to generate big returns for the company’s investors.

But betting on young companies trying to successfully monetise cutting edge technology is intrinsically a risky business. While enough of Baillie Gifford’s bets have come off in recent years to make its funds and trusts’ stock pickers look like visionary geniuses incapable of putting a foot wrong, its luck has turned this year due to several major holdings suffering heavy falls. With the Fed expected to hike interest rates as many as three times next year, high risk investments of the kind the Baillie Gifford funds invest in could be set for a rockier ride. When cash becomes more expensive, markets tend to place more emphasis on income and profits today than their future prospects.

The U.S. online estate agent Zillow Group is among the biggest losers of Baillie Gifford holdings this year, having seen its value slump 57% while remaining a top 10 holding in its Edinburgh Worldwide and Global Discovery trusts, significantly influencing their poor performance. Zoom has been another drag. Shares in the video conferencing app, which rocketed in 2020 as remote work became the norm in the early part of the pandemic, are down almost 50% this year.

Big blows have also been inflicted by the plunging valuations of online public transport ticketing platform Trainline which has lost 42% of its value this year and British online groceries and robotics company Ocado. 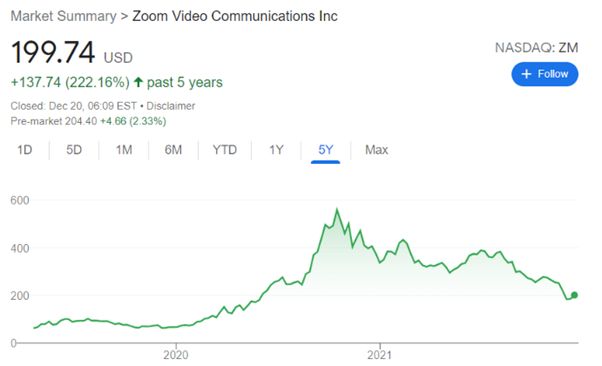 Is it time to sell out of Baillie Gifford funds?

The 2021 travails of the Baillie Gifford funds and trusts offer investors a lesson in why to avoid overexposure to any one dominant style of investing. Doing so inevitably introduces greater volatility, accentuating peaks and troughs in returns. However, one fallow year also doesn’t necessarily mean the wheels have come off for Baillie Gifford’s fund managers.

Especially in the tech stocks market that has done so well for Baillie Gifford investors, a level of volatility is to be expected. And over the longer term, most of the Baillie Gifford funds are still among the best performs in their sectors. The Global Discovery and American funds may have been among the worst performers this year but both are still in the top 2% of their sectors over the past ten years.

“We are clear that we invest with five to 10-year horizons over which we expect our funds to beat the market. Our portfolios look nothing like the index and, as such, investors might expect volatility over short-term periods.”

Given their long term outperformance, investors in Baillie Gifford funds may be best advised to diversify, if their portfolios look too heavily weighted towards the holdings, but otherwise remain calm and focus on the next five to ten years.

It may have been an annus horribilis for Baillie Gifford’s funds but markets always have winners and losers so who were 2021’s winners? Supply chain issues and pent-up consumer demand being unleashed meant the commodities sector was the year’s best performer as prices of oil, gas and raw materials soared.

That’s helped the £500 million Schroder Global Energy fund return 48% to investors so far this year, making it the UK’s best performing major retail-facing fund. With most economists expecting the bull market for commodities to stretch well into 2022, the fund’s run may also still have some way to go.