Age-Tech: Is The Intersection of Tech and Longevity The Next Big Investment Verticle?

What exactly is Age-Tech? Just like all the other ‘techs’, from ‘fintech’ to ‘health-tech’ and ‘learn-tech’, age-tech refers to products or services that use innovative digital technology in a way that disrupts traditional ways of doing things or the traditional business models behind the legacy industry. In the case of ‘age-tech’, the traditional sector in question is the Longevity economy. The ‘Longevity’ economy encompasses services purchased by older people, on behalf of older people or traded between older people. A fourth category of Longevity economy products and services would be those targeting the future ‘older self’ that younger people will become.

‘Techs’ tend to attract interest, investment and development for two main reasons. The first is that the industry they aim to or are disrupting is a large, valuable one with clear inefficiencies. The second that they focus on a high growth industry. It can be strongly argued that ‘Age-tech’ represents both. The over 65s are certainly not a new demographic and at least over the past couple of decades they have been a valuable one. Baby boomers having benefitted financially from booming property and equities markets over their working lives and of course businesses and services have not ignored that financial strength. The ‘silver’ pound, dollar or euro has been chased through a range of products and services that wouldn’t have had a major market over previous generations. 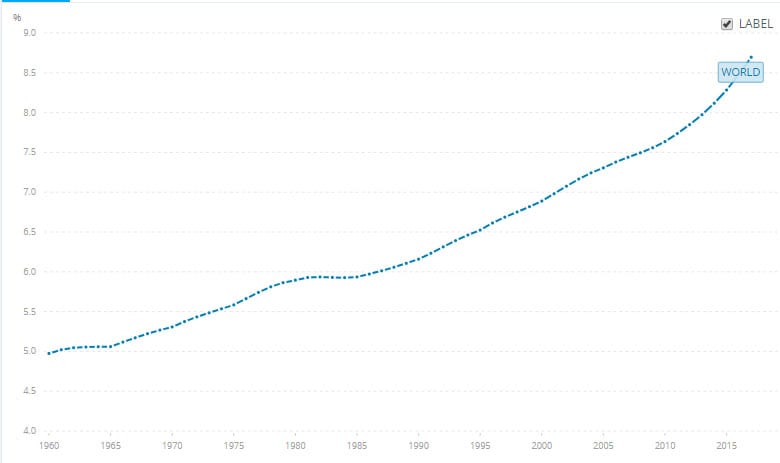 And in developed markets such as the UK and USA, the over 65s are a much bigger percentage of the total population. Close to a fifth today in the case of the UK. 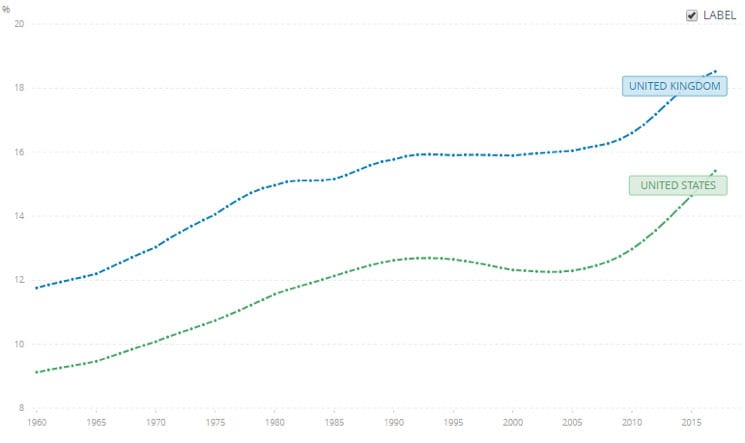 And there is plenty of growth still to come. According to research report released by the USA’s Population Reference Bureau, the number of Americans over 65 is set to double by 2060. The demographic today consists of around 46 million individuals and will rise to just under 100 million a few decades from now. A similar trend is expected in the UK and other developed nations, with emerging markets starting to catch up as they become wealthier.

Investment Is Starting to Pour Into Age-Tech

Given the growing size and economic power of the over 65s demographic, it is perhaps no surprise that money is flowing into the still nascent ‘Age-tech’ sector. In a recent interview with Forbes magazine, venture capitalist Dominic Endicott compares the current development of and investor interest in ‘Age-tech’ as comparable to ‘Fintech’ back in 2007. He has already had success in the sector. His company was one of the first investors in a start-up called Great Call – a ‘mobile wellness service’ targeted at older customers. The company was recently acquired for $800 million. Motivated by that success and the potential he sees in the sector, Endicott is now setting up 4G Ventures, a venture capital fund dedicated to Age-tech.

So what are good examples of ‘Age-tech’ across the four categories of innovative digital products for older people or future older people?

One given by Endicott is a partnership between Great Call and the ride-hailing app Lyft. While older people would of course appreciate the value offered by app-based transport services such as Uber and Lyft, many are not particularly comfortable using smartphone apps. But the partnership means they can just call up Great Call and order their ride through a phone-based service they are already used to.

Another example of a successful early example of an Age-Tech start-up is Pill-Pack. The company puts together medicines for a user, assembling and packaging them in a way that makes it easy for them to know what to take when and reduces the potential for mistakes. These ordered and dated packages are then delivered to the client. Amazon recently acquired Pill-Pack for a whopping $1 billion.

Other examples provided are a digital platform that will help those retiring from corporate careers to continue to work but with a more flexible ‘career path’. Better health into later life also means older generations are able and willing to work for longer. That, in turn, continues to make the demographic an enticing investment prospect. The ‘Ageing Economy’ is already valued at $7.6 trillion a year in the USA and $4 trillion in Europe.

At the older end of the Age-tech demographic are start-ups looking to combine the well-established ‘Meals on Wheels’ concept with digital technology that allows older people to order tastier, more nutritious meals from a greater choice. Surveillance technology in homes that can alert emergency services to a fall. And robots that are both home assistants and offer a kind of companionship to those who are infirm or suffer from conditions such as Alzheimer’s.

The ‘Ageing Economy’ is estimated to account for around 20% of global GDP. Despite growing massively, the digital economy still only accounts for around 8% of global GDP. And the older demographic represents a huge growth opportunity for the digital economy as that in which it currently has the lowest penetration. Growth will be helped by the fact that those that newly enter the over 65s demographic in future years will be more tech savvy, having been introduced to digital products and services while younger.

Key to successful ‘Age-tech’ products and services is, at least in many sectors, them being created and packaged in a way that is convenient and appealing to older consumers without focusing on ‘age’. There are many tech sectors that should appeal more to older generations than they currently do. Fintech, for example, tends to focus on the Millennials demographic. However, the majority of wealth is held by older generations, which misses a great opportunity. The same can be said of Health-tech like Fitbits and other wearables that track vital statistics. They are most popular with the young but actually arguably would benefit older users more.

As such, a chunk of the Age-tech sector will come from repackaging or repurposing business models and products from other ‘techs’ to appeal more to older generations and to address their priorities. Those that are most successful will probably have appreciated the market reality that older people don’t like to buy products and services explicitly targeted at older people.

Age-Tech The Next ‘Frontier’ For Disruption

Given the size and untapped digital economy potential of the over-65s demographic, there are many investors and market analysts who are convinced ‘Age-tech’ will be the next big buzz sector for venture capital. From health to medicine, finance, consumable goods, convenience services, travel and leisure, we can expect to see more and more influential start-ups that successfully and ‘inexplicitly’ target and win the ‘silver dollar’. Hopefully that development will also inject more convenience and enjoyment into the lives of the older demographic it serves.