The share price of Bluejay Mining, an Aim-listed mining minnow, has soared by over 23% today on news it has sealed a deal with KoBold Metals, a battery minerals investment vehicle back by big hitters including Bill Gates, Jeff Bezos and Michael Bloomberg. The agreement will see KoBold take 51% of the rights granted under Bluejay’s Disko-Nuussuaq licence to develop a significant nickel, copper and cobalt mine in Greenland.

In exchange, KoBold will spend around £11 million to finance geological evaluation and exploratory drilling using its own patented technology. The license covers an area of around 3000 sq km of Greenland. Bluejay hopes it is home to “multiple globally significant occurrences of nickel and copper”. 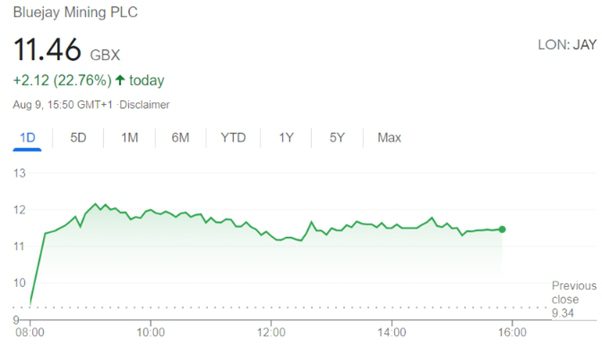 Nickel, copper and cobalt are all seeing increased demand due to their use in electric car batteries and those of other technologies key to efforts to transition away from fossil fuels to electrification powered by renewable sources. Bluejay also has another project in Greenland, the Dundas Ilmenite project in the territory’s north-west, for which it won a 40-year license in December. The mine is expected to produce up to 600,000 tonnes a year of Ilmenite, a titanium-iron oxide mineral used in paints, plastics and cosmetics.

KoBold Metals has developed sophisticated AI algorithms to predict the likelihood and concentration of underground reserves of metals and minerals. It aims to boost global supplies to meet increased demand from electric car and other electronics manufacturers.

“The Disko region has seen the rare convergence of events in earth’s history that could have resulted in forming a world-class battery metal deposit. KoBold’s technology is perfectly suited to discovering new resources at Disko. Our proprietary library of analytical tools, Machine Prospector, will enable effective deployment of exploration capital and maximise our chances of discovery at Disko-Nuussuaq.”

“This agreement is transformative for Bluejay. We are delighted to have a partner at the pinnacle of technical innovation for new exploration methods, backed by some of the most successful investors in the world.”

“Additionally, Bluejay retains the ability to self-fund to maintain a 49pc ownership through to production, providing external public investors with the opportunity of investing alongside a private investment entity of this magnitude.”