The AJ Bell share price has fallen 2% in morning trading today despite the fact the investment platform, one of the UK’s big 3 with Hargreaves Lansdown and II, announced it is to reward shareholders by increasing its dividend to £40 million. The FTSE 250 company also reported a rise in its annual revenues and profits. However, after a strong 2020 that saw a boom in online investing during lockdown periods, AJ Bell’s market capitalisation is down 11.65% over 2021.

Despite the lack of enthusiasm from investors for growth that has inevitably slowed this year, the investment platform, which has £72.8 billion of assets under its management, still achieved revenue growth of 15.1% for the year and a 13.1% improvement in pre-tax profits. The former figure reached £145.8 million and the latter £55.1 million thanks to AJ Bell attracting 87,449 new customers over the financial year to the end of September. Those new accounts brought in net inflows of £6.4 billion in assets. 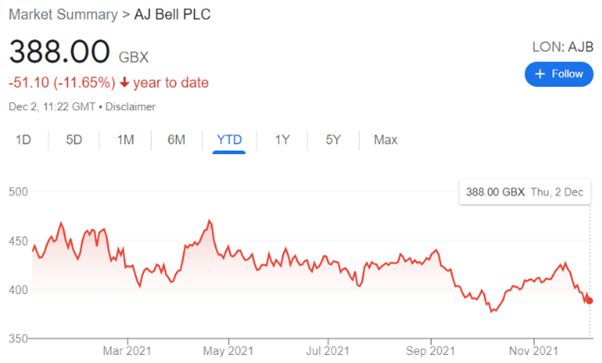 A special dividend of 5p-a-share worth £20.5 million and bringing the total dividend payout for the year to £40 million was not enough to cushion the disappointment of reported revenues and profits falling slightly short of analyst expectations. A pre-tax profit of £57 million, almost £2 million higher than the eventual figure, and revenues of £146.7 million, £900,000 short of what was reported, had been anticipated.

Share price losses were as much as 5% in early trading before paring to 2% by late morning.

A good chunk of the dividend payout will directly benefit the investment platform’s chief executive and co-founder Andy Bell, who still owns around 23% of the company’s shares. He will bank around £9 million of the payout. The special dividend will also add to the strong gains shareholders who invested in AJ Bell’s IPO three years ago have benefitted from. The company listed at 160p-a-share with the same stock now trading at 388p.

The company was originally established in 1995 by Bell and a friend Nicholas Littlefair as an administrator and trustee for individuals with SIPPs (self-invested personal pensions), as well as for small workplace pension schemes. It rode the wave of the online and digital revolution brought about by mass internet access and is now one of the UK’s leading wealth and investment platforms. As well as SIPPs and ISA products, AJ Bell is also now a fund supermarket and stockbroking platform.

“We continue to see significant long-term opportunities in the investment platform market. The pandemic has highlighted the need for people to take more control over their financial future, with increasing numbers of people investing for the first time.”

Alongside its full-year results announcement today, AJ Bell also informed investors that chief financial officer Michael Summersgill will be replaced by Peter Birch, a partner at the accounting and audit giant Deloitte. He will join AJ Bell in July next year with Birch promoted to deputy chief executive. There has been some speculation, which the company has denied, that the move might be paving the way for Mr Bell’s retirement.