The AJ Bell share price fell by 3.6% yesterday followed by another 2.5% slide this morning despite the company reporting 32% year-on-year growth in its customer numbers. The leap in account holders using the DIY investments platform is a phenomenon that has been seen across leading investment and trading platforms that cater to retail investors.

Lockdown conditions over the pandemic period have encouraged many more people to use some of the extra free time and savings they found themselves with as a result of not travelling to work to start investing or trading. AJ Bell has been a major beneficiary of the trend alongside peers including Hargreaves Lansdown and Interactive Investor. 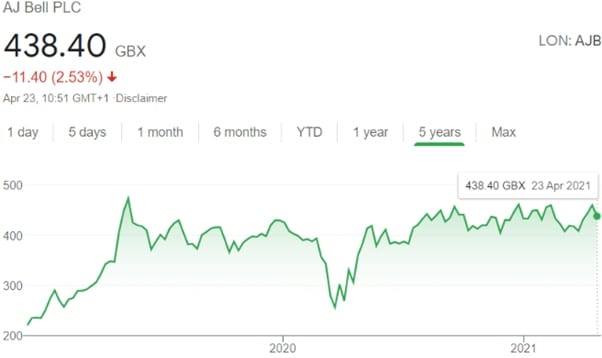 The 32% growth enjoyed over the previous two months took AJ Bell’s total customer numbers to 346,797. The investments company now administers £65.2 billion in assets, representing year-on-year growth of 35%. £1.5 billion of net capital inflows were invested through the company’s platform over the three months to the end of March. Increasing asset values added another £1.2 billion to the value of assets under administration over the quarter.

The AJ Bell share price decline since announcing the results is put down to the fact net inflows were down 6% compared to the £1.6 billion attracted over the quarter to the end of December. In the context of improving net inflows reported by peers including Quilter and IntegraFin earlier in the week, investors appear to be slightly disappointed the strong overall results weren’t even better than proved to be the case.

AJ Bell was originally established in 1995 as a provider of pension administration services before riding the new digital wave to evolve into one of the UK’s largest investment platforms. The company, a member of the FTSE 250 index, went public in December 2018 and is currently worth £1.8 billion. It’s platform is used by retail investors to buy and sell shares and funds as well as selling ISAs, SIPPs and offering an adviser platform for qualified, personal financial advice.