Alibaba’s recent float on the Hong Kong Stock Exchange is set to go down as 2019’s biggest listing, after the ecommerce raised more than $11 billion. And unlike some of the other major listings this year, Alibaba’s stock got off to a good start on its first day of free trading as it rose 6.6% over the Asian trading session this morning. 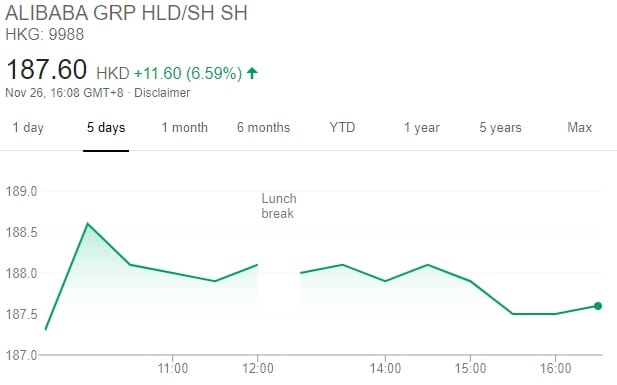 With Hong Kong currently a political powder keg against a backdrop of pro-democracy protests in the ‘Special Administrative Region’ of China, riot police were positioned outside of Hong Kong’s stock exchange today. However, that doesn’t appear to have distracted either local or international investors, who drove the price of Alibaba’s Hong Kong-listed shares to 187.6 HKD by the close of market this morning.

The good mood was helped along by Alibaba’s chief executive Daniel Zhang announcing to an audience that Alibaba had “returned home to Hong Kong” shortly before financial markets opened in Asia. The new listing, which adds to the company’s other listing on the NYSE, follows months of simmering trade tensions between the USA and China and can be considered as an insurance policy for Alibaba, which has in the past said that a worsening of the trade war could put its Wall Street presence under threat.

Charles Li, the Hong Kong exchange operator’s chief executive commented that he believed Alibaba’s decision will encourage other major Chinese companies who chose to list on Wall Street to “come home”. A number of prominent Chinese tech companies have in recent years chosen to pursue either a dual listing on Wall Street, or to snub domestic stock exchanges entirely. Hong Kong Exchanges recently made an unsolicited bid for London Stock Exchange – which was rejected.

Analysts have commented that today’s gains for Alibaba’s Hong Kong share price were slightly better than expected. The listing is also being seen in Asia as a vote of confidence in the Beijing authorities’ ability to handle the current unrest in Hong Kong. And demonstrate belief that the city will remain a major financial centre in the future.

When the Hong Kong listing was initially announced by Alibaba back in June, the company had aimed to raise up to $20 billion. However, those ambitions were watered down as a result of the ongoing political crisis in Hong Kong. After posting record $38 billion turnover on Singles’ Day, an annual discounted shopping event initiated by Alibaba, and publishing third quarter revenues up 40% on the same three months last year, the company decided to strike while the iron was hot and go ahead with the listing. And the $11.3 billion raised put the float considerably ahead of the $8 billion raised by Uber in May as 2019’s biggest anywhere in the world.

The share sale was co-sponsored by Chinese bank CICC, which is state-owned, and Credit Suisse.

While most still caveat the argument with the get-out clause it is far from... END_OF_DOCUMENT_TOKEN_TO_BE_REPLACED

Natural gas prices have rocketed with Russia accused of managing supply to drive up... END_OF_DOCUMENT_TOKEN_TO_BE_REPLACED

After their valuations boomed in 2020, the UK’s online fast-fashion giants of Asos and... END_OF_DOCUMENT_TOKEN_TO_BE_REPLACED

The dust has almost settled on the months-long takeover battle between U.S.-based private equity... END_OF_DOCUMENT_TOKEN_TO_BE_REPLACED