The Alphabet share price has gained over 4% in after-hours trading after Google’s parent company announced over 100% growth in profits to beat analysts’ forecasts. The surge in revenues and subsequently profit was attributed to “elevated consumer activity online”, during the coronavirus pandemic.

First-quarter revenues over the three months to the end of March set a new record after climbing 34% to $55.31 billion. And unless market sentiment drastically changes between now and Wall Street opening later in the European afternoon, the Alphabet share price will also reach a new record high today. 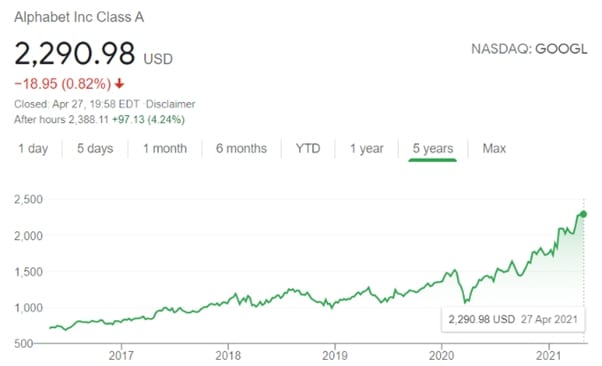 $1.5 trillion-valued Alphabet still makes most of its revenues from digital advertising, with the Google search engine and YouTube video-share platform contributing the lion’s share. The Play store for mobile devices that run on Google’s Android operating system and Google’s Cloud Platform are also seeing strong growth in revenues.

Google’s revenue from digital advertising was up 30% year-on-year to $31.88 billion, while YouTube’s growth in digital marketing revenues was even more impressive at 49%, taking total income over the quarter to $6.01 billion. Google Cloud Platform’s sales rose 46% to $4.05 billion.

Investors will also be happy to hear the Alphabet board has approved a $50 billion share buyback programme, which should prove a boost to the company’s share price over coming months.

Alphabet’s share price has now more than doubled since its low point last March following the coronavirus-inspired market sell-off. A combination of the acceleration of the trend towards online shopping and the use of cloud computing as the digital infrastructure of choice has boosted the revenues of not only Alphabet but most large technology companies.

However, general stock market euphoria driving a powerful bull market is also certainly playing its part in the colossal valuations Alphabet and its big tech peers have recently achieved.

One potential cloud on the horizon that doesn’t currently appear to be giving Alphabet investors too much cause for concern is a growing regulatory threat as the company continues to grow in power. Google is currently facing three U.S. antitrust lawsuits. They target the company’s dominant position in Search, contract negotiations with OEMs and alleged anticompetitive behaviour in Network Members. The company is also facing pressure from European regulators.

Despite potential headwinds and the company’s already colossal valuation of over $1.5 trillion, analysts at the investment bank Bernstein estimate that the Alphabet share price could still have a potential upside of as much as another 50% in the best-case scenario.