Alphabet’s 7.7% share price gain over the first 2 weeks of 2020 has left Google’s parent company a fraction of a percent away from its valuation passing the $1 trillion threshold for the first time. By the close of Friday last week, 2020 gains of 7% saw the tech giant, which still generates a large majority of its revenue from online advertising despite significant investment in other areas, move to within 1% of a $1 trillion market capitalisation.

Market observers will today be interested to see if Alphabet can maintain its momentum to break through the $1 trillion ceiling. Even if the company’s share price stutters and falls back from the important psychological level it is on the verge of breaching, most analysts believe that would likely be no more than a temporary setback. 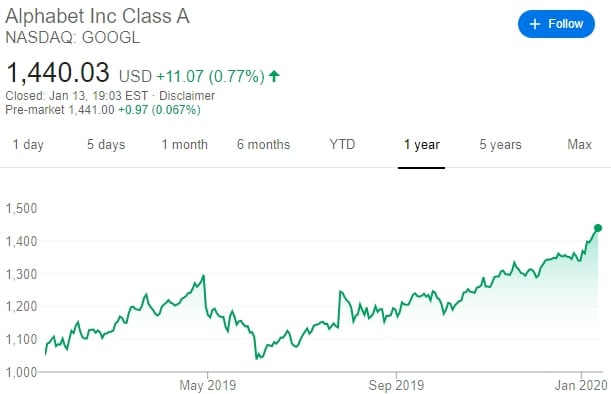 Investors and analysts are confident that Alphabet, under its new chief executive officer Sundar Pichai, will become more disciplined in its spending, sparking a further rise in its share price. Co-founders Larry Page and Sergey Brin announced in December that they were stepping back from day-to-day management of Alphabet. Their influence on the amount of money Alphabet has spent on long term and ‘moonshot’ projects that haven’t contributed to revenues, has been significant. When the two co-founders first took Google public in 2004, they stated that they didn’t want the company to only focus on the pursuit of traditional stock market metrics of revenue and profit growth. Their real goal, they said, was “to make the world a better place”.

Some analysts believe the company’s level of spending on passion projects such as Google and Alphabet’s health and life sciences units, and cash-sucking projects such as driverless car technology unit Waymo, whose eventual return will not be realised for probably another decade or longer, have hurt the share price.

Walter Price, manager of Allianz’s global tech fund, is quoted in the Financial Times as commenting:

“They keep trying to find the next Google, but there is no next Google. Their negative influence lingers on even though they are not in management any more. The stock would be 50 per cent higher if they changed their position and became more sensitive to investor needs, as Apple and Microsoft have done.”

However, despite the allocation of significant funds to research and development projects, Alphabet’s revenue and profit growth record continues to confound expectations. At the outset of the previous decade, Google, which became part of the new holding company Alphabet in 2015, had an annual growth rate of 24%. Ten years on and growth remains over 20%. Few would have bet that level would have been maintained for so long, especially with revenues now over five times what they were a decade ago.

And with global advertising and marketing spend continuing to move online at pace, Google revenues still have plenty of room to grow. Which is just as well, with online advertising still accounting for a large majority of all group income. However, a group of service companies that include the Play app store, Google Cloud Services and hardware sales, now account for 16% of revenues and are growing at twice the rate of the Alphabet average.

Carrying extra voting rights, the shares of co-founders Page and Brin still hold in the company they founded still mean they are able to exert significant influence on the direction of Alphabet, even if the pair have stepped back from day-to-day involvement. And they appear to still hold the ambition that their company invests in enterprises that don’t necessarily offer the prospect of shorter term returns, or are even focused on profitability. Last year Mr Page told the Financial Times:

“It’s unsatisfying to have all these people, and we have all these billions we should be investing to make people’s lives better. If we just do the same things we did before and don’t do something new, it seems like a crime to me.”