The share price of Alphabet, Google’s parent company, opened 3% up this morning after Google announced a deal to acquire the U.S. cybersecurity group Mandiant for $5.4 billion. If it goes ahead as expected, the deal will represent Google’s second largest ever acquisition, second only to the 2012 purchase of Motorola Mobility for $12.5 billion.

The deal will help reinforce Google’s rapidly growing cloud-computing business Google Cloud Platform, in an environment of heightened cybersecurity concern. Western companies and governments are braced for a onslaught of Russia-based and sponsored cyberattacks in retaliation to economic sanctions imposed following the invasion of Ukraine. 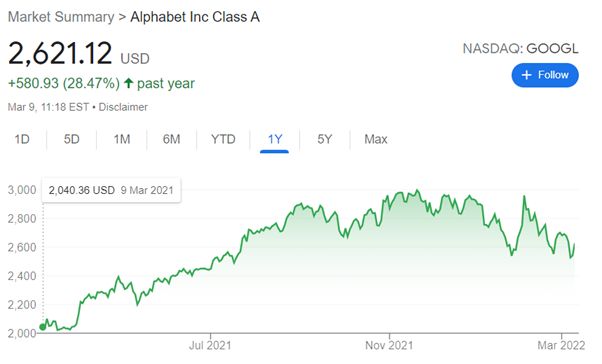 Mandiant helps its customers prepare and respond to cyberattacks and the deal agreed with Google is for an all-cash takeover. Mandiant products and services are expected to be integrated into Google’s enterprise cloud offerings.

2004-founded Mandiant employs 2300 staff and was spun out of FireEye, who bought it in 2013, last year when the company sold its security products business for $1.2 billion. Google will pay a relatively modest premium of $23 a share compared to Monday’s closing price of $22.49 a share. Mandiant is listed on the Nasdaq stock exchange and saw its share price gain 16% on Monday after the tech sector news site The Information broke the story. Mandian told its shareholders the $23 bid represented a 57% premium on its ten-day average price before “market speculation” over a deal started last month.

$1.7 trillion-valued Google has seen demand for its cloud computing services and products rise sharply over the past couple of years. In 2021 Google Cloud revenues were up 45% to $5.5 billion.

The purchase still has to be approved by regulators and Mandiant shareholders but if it goes ahead Google will hope it works out better than the $12.5 billion deal to acquire Motorola. It sold the company on to Lenovo for $2.9 billion just two years later to book a massive loss.

Google’s Big Tech rivals are also investing heavily in cybersecurity with Microsoft forecasting it wil spend $20 billion in the space over the next five years. It has also been linked with a potential bid for Mndian.

Commenting on the deal, Google Cloud chief executive Thomas Krian said it would

“Organisations around the world are facing unprecedented cybersecurity challenges,” Kurian added, “as the sophistication and severity of attacks that were previously used to target major governments are now being used to target companies in every industry.”

His counterpart at Mandiant, Kevin Mandia, commented on behalf of his company:

“We are thrilled to be joining forces with Google Cloud … we will deliver expertise and intelligence at scale.”