The Alphabet share price has been driven to new record highs in early trading on Wall Street this morning. A 4.3% gain takes Google’s holding company to a market capitalisation of $1.88 trillion and comes thanks to the tech giant recording another record quarter on the back of surging online advertising revenues.

While Alphabet is the umbrella for not only Google but also a number of other company’s spun out of the search goliath, including self-driving cars unit Waymo and UK-based artificial intelligence company DeepMind, it is still the former that drives a large majority of revenues. And most of those revenues still come from digital advertising paid for on Google’s search engine and the popular video streaming platform YouTube. 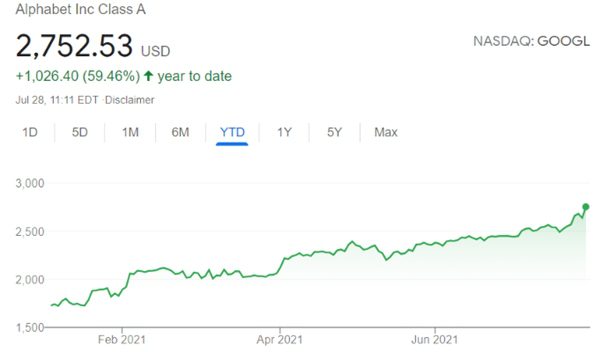 In announcing record second quarter revenues of $61.88 billion, a huge 62% rise on the April to June period a year earlier, Alphabet said it had benefitted from “a rising tide of online activity”. That was put down to national lockdowns around the world easing, encouraging businesses to launch new marketing activities to target customers.

The impact of those lockdown measures on business advertising, and Google’s advertising revenues, was also mitigated by an increase in spending by other companies seeking to benefit from restrictions and the move to e-commerce and digital entertainment, lifestyle or education products and services. As a result, Google’s ad revenues both held up well over the pandemic period and are now benefiting from it coming to an end.

The jump from $38.3 billion in revenue a year ago to $61.88 billion this year was also more pronounced than analysts had predicted. Forecasts had been for $56.16 billion, over $5.5 billion lower.

“Our strong second quarter revenues reflect elevated consumer online activity and broad-based strength in advertiser spend. Again, we benefited from excellent execution across the board by our teams.”

Advertising revenues grew even faster than Alphabet’s overall 62% revenue growth with a 69% rise. That was even more pronounced on YouTube, where growth hit over 80%. Google’s cloud computing division, Google Cloud Platform, also continued to make a strong contribution to company growth with revenues up 50% to $4.63 billion.Alphabet and Google chief executive Sundar Pichai stated:

“We’re proud that our services helped so many consumers and businesses. Our long-term investments in AI and Google Cloud are helping us drive significant improvements in everyone’s digital experience.”