The Alphabet share price has continued to rise this morning in line with its consistently positive direction in recent months despite confirmation France’s competition regulator has slapped Google with a €500 million fine. The fine was dished out for violations of a previous order issued for it to reach agreement with publishers on licensing deals allowing it to use snippets of articles in its search results.

The watchdog ruled Google had not subsequently pursued negotiated agreements with publishers in good faith. As well as the fine, the search engine giant has been ordered to prepare and present a new set of proposals on how it plans to compensate publishers for using their content within two months. Failure to do so could result in new fines of up to €900,000 a day. 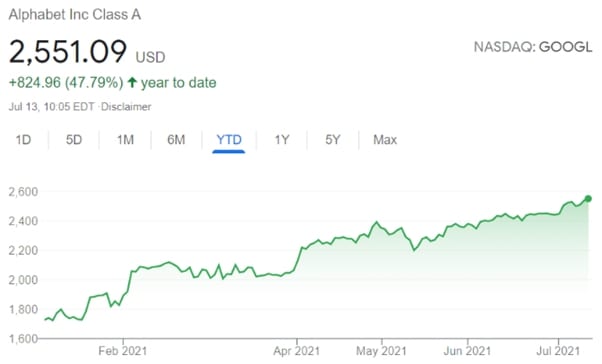 The fine could be used as a precedent by other international regulators and will further fuel the discussion around whether Google and other dominant internet platforms like social media giants Facebook should help fund quality online journalism.

Publishers have spent years pushing for financial compensation from Google when it displays excerpts of their content in ‘snippets’ that form an increasingly large part of search results served to answer user queries. Users often receive the information they are looking for from such snippets without actually clicking through to the website of the publisher, meaning they get no discernable advantage to Google using their content.

The tech giant, however, does because the content publishers pay to produce drives traffic to the search engine which Google benefits from by the advertising income it generates and other services offered.

Google argues snippets from articles appearing in its search results drives traffic to publishers websites and apps for free. And that publishers voluntarily choose to have their pages indexed by Google and included in search results. The counter argument is that Google’s near-monopoly position as a search engine across much of the world leaves publishers with little practical choice.

Regulators and policymakers are increasingly siding with the publishers and are concerned the dominant position the tech giants now hold across many business verticals, including as a gateway to news and other journalistic content is hurting competition. The Australian government has already insisted Facebook and Google negotiate licensing deals with publishers and given themselves the power to set fees in the event of a failure between parties to reach an agreement.

“When an authority decrees an obligation for a company, it must comply scrupulously, both in the spirit and letter [of the decision]. Here, this was unfortunately not the case.”

Google responded through a spokesman.

“We have acted in good faith throughout the entire process. The fine ignores our efforts to reach an agreement, and the reality of how news works on our platforms. To date, Google is the only company to have announced agreements on neighbouring rights.”

2020 was a disaster for income investors as the onset of the coronavirus crisis... END_OF_DOCUMENT_TOKEN_TO_BE_REPLACED

With gains of 21% since the beginning of the year, commodities has been the... END_OF_DOCUMENT_TOKEN_TO_BE_REPLACED

The London-listed mining company Rio Tinto has just announced it will pay out record... END_OF_DOCUMENT_TOKEN_TO_BE_REPLACED

Since he founded it as an online bookseller from the garage of his rented... END_OF_DOCUMENT_TOKEN_TO_BE_REPLACED

Last month the board of Wm Morrison, the UK’s fourth largest supermarket chain by... END_OF_DOCUMENT_TOKEN_TO_BE_REPLACED