Profits at Amazon, the e-commerce and cloud computing giant making strides into bricks-and-mortar retail, have grown by more than 300% as lockdown measures kept consumers shopping online over the first three months of the year. The Amazon share price has gained 2.35% in after-hours trading following the release of yesterday’s positive quarterly report.

Amazon’s AWS cloud computing service, the fastest-growing part of the business, has also powered ahead, benefitting from an acceleration in the transition towards a more digital economy. The unit is the market leader in cloud computing services, comfortably ahead of rivals including Microsoft’s Azure and the Google Cloud Platform. 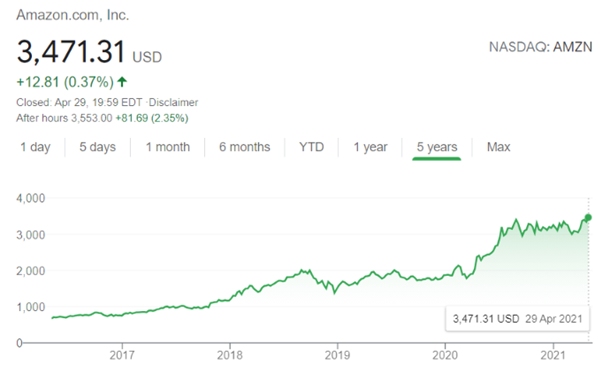 Across the company, net sales were up 44% over the first quarter on a year-by-year basis. That took revenues to $108.5 billion for a net income of $8.1 billion. Amazon is also confident that a strong rate of revenue growth will be maintained into the current quarter, for which a rise of between 24% and 30% is expected. That’s particularly impressive in the context of lockdowns designed to control the spread of the coronavirus pandemic having already been in over the same quarter a year earlier.

Now the world’s biggest retailer, Amazon’s interests span e-commerce, cloud computing, digital advertising and streaming services. The company is also working to quickly expand its new Amazon Go chain of convenience stores, is developing an online pharmaceuticals business and recently even announced the opening of a hair salon in London.

Like its big-tech peers such as Apple, Alphabet and Facebook, the biggest and only major current concern for Amazon and its investors is increasing scrutiny from regulators concerned about their growing dominance across several markets. In November Amazon battled antitrust charges the European Commission brought against it. Unionisation of its workforce is another slight worry and a campaign in Alabama seeking to establish a warehouse union was headed off earlier this month.

In its domestic and largest market in the USA, Amazon’s sales grew by 40% to $64.4 billion over the quarter and operating margins were improved from 3.7% to 4.2%. AWS’s revenues were up almost a third to $13.5 billion. Margins at the cloud computing unit are also especially attractive and reached 30% from 29.8% a year earlier.

Amazon founder and chief executive Jeff Bezos will step down from an active role in the company in the autumn, after almost three decades. He set the company up from his garage as an online bookstore before it evolved into general e-commerce. He will be succeeded by current AWS boss Andy Jassy.