The Amazon share price gained 4.7% yesterday to take the company’s valuation to $1.85 trillion as Andy Jassy officially took over from founder Jeff Bezos as the new CEO. A further boost came from news the Pentagon has cancelled a $10 billion U.S. government contract with Microsoft’s Azure cloud computing business.

The initial decision to hand the contract to Microsoft was rumoured to have been the result of the former president Donald Trump ordering officials to “screw” Amazon. The company challenged the decision at the time, accusing the White House of placing “improper pressure” on Pentagon decision makers to snub a bid from AWS, Amazon’s cloud computing business and the market leader. 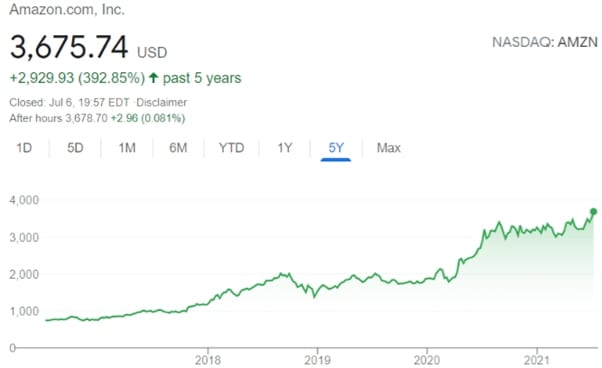 While the Pentagon’s inspector said he had found no evidence of improper influence from the White House in the lead up to the original decision, the new Biden administration has still moved to rescind it. The new contract is on a multi-vendor basis and will be split between a number of cloud services providers, with both Amazon and Microsoft, the two market leaders, expected to be among them.

U.S. government officials have declined to publish the value of the new contract. However, John Sherman, the defence department’s acting chief information officer, did say market observers should not “latch on to “ the previous $10 billion figure estimated as the cost over a decade. If that means the estimate has now increased or been scaled back is unclear.

The Microsoft share price initially fell on the announcement but recovered those losses throughout the day yesterday, eventually closing just one cent down at $277.66.

Yesterday marked the first time in 10 months the Amazon share price had set a new record high. It’s a good start for new CEO Jassy, who has been head of AWS, Amazon’s cloud services division and now the company’s most profitable business as well as one that is expected to continue to grow quickly over the next several years.

Jassy has been with Amazon since 1997 and has been groomed for years by founder Jeff Bezos as his successor. Bezos himself will move into a new role as Amazon’s executive chairman and says he will use the extra time stepping back from day to day management of the giant company will give him to focus on “new products and initiatives”.

He is also expected to spend more time on Blue Origin, the space exploration company he founded and, with his brother, will be the first passenger of to near space on July 20th, if all goes to plan.

2020 was a disaster for income investors as the onset of the coronavirus crisis... END_OF_DOCUMENT_TOKEN_TO_BE_REPLACED

With gains of 21% since the beginning of the year, commodities has been the... END_OF_DOCUMENT_TOKEN_TO_BE_REPLACED

The London-listed mining company Rio Tinto has just announced it will pay out record... END_OF_DOCUMENT_TOKEN_TO_BE_REPLACED

Since he founded it as an online bookseller from the garage of his rented... END_OF_DOCUMENT_TOKEN_TO_BE_REPLACED

Last month the board of Wm Morrison, the UK’s fourth largest supermarket chain by... END_OF_DOCUMENT_TOKEN_TO_BE_REPLACED