After a tough day of Thursday trading that saw the Amazon share price decline by almost 8%, the e-commerce and cloud computing giant’s valuation has soared by over 14% in after-hours trading. The reversal in market sentiment came after the company announced unexpected growth for its last quarter earnings last year and price rises in the U.S. for the Amazon Prime subscription which will help it deal with high levels of inflation.

Another surprise factor in the report was the contribution made to the bottom line last quarter by Amazon’s investment in Rivian Automotive, the electric truck start-up. 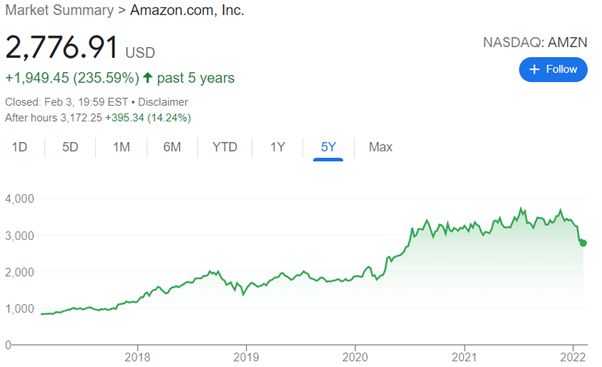 Amazon had told markets it might have no operating profit at all across the fourth quarter due to major investments being made and supply chain and staffing issues. In the end, net sales rose by 9% to $137.4 billion for net income of $14.3 billion and an operating profit $3.5 billion to beat the top of the expected range.

However, it was an $11.8 billion rise in the value of its stake in the electric truck company Rivian after it went public last November that compensated for the increased costs and spending on faster deliveries for Prime members late last year. Rivian has, however, seen its value plunge by over 40% in early 2022.

Another record quarter for Amazon was also again supported by Amazon Web Services (AWS), the company’s market-leading public cloud business. Its revenues rose 40% to $17.8 billion for $5.3 billion in operating income, compensating for losses sustained in other businesses. Some investors have called for Amazon to split AWS out as an independent public company, believing its valuation is being held back by the low margin e-commerce business. Advertising sales, which are becoming more significant for Amazon and reported independently for the first time, rose 32% to $9.7 billion.

Perhaps most influential in Amazon’s after-hours share price gains was the news the company is to hike the cost of Prime membership by $20-a-year from $119 to $139, or $12.99 to $14.99 for monthly plans. The company has been investing heavily in minimising delivery times and admitted “rising costs and inflation” were behind the decision. However, subscribers have also been promised new perks in compensation.

One downside to the generally positive report was the company’s internal forward guidance for sales over the current quarter to the end of March to come in at between $112 billion and $117 billion. Analysts had projected $120 billion.

Elsewhere on Wall Street, other tech stocks showed some extreme volatility in their valuations after reporting their quarterly figures. Social media company Snap, which owns Snapchat, saw its valuation plunge by almost a quarter yesterday as it was caught up in social media sell off that followed Facebook and Instagram-owner Meta warning of slowing ad spend. But after exceeding expectations for earnings and posting its first ever quarterly profit, its share price has rocketed 53% in after hours trading.

Pinterest is also up almost 20% in after hours trading after suffering a 10% decline yesterday after it also beat forecasts with its quarterly report.