The Amazon share price has lost over 6% in after hours trading ahead of Wall Street opening for its Friday session. If current losses hold they will wipe out almost half of the share price’s 13% gain for the year to date. The sell off was sparked by the e-commerce and cloud computing giants telling investors to expect its rapid growth rates since the start of the coronavirus crisis to start to fade.

However, sales over Amazon’s second quarter to the end of June certainly benefitted from the pandemic-led e-commerce and digitalisation boom. Net sales over the period were 27% up to reach $113.1 billion. That had a magnified effect on net income, which saw growth of almost 50% to a record $7.8 billion. 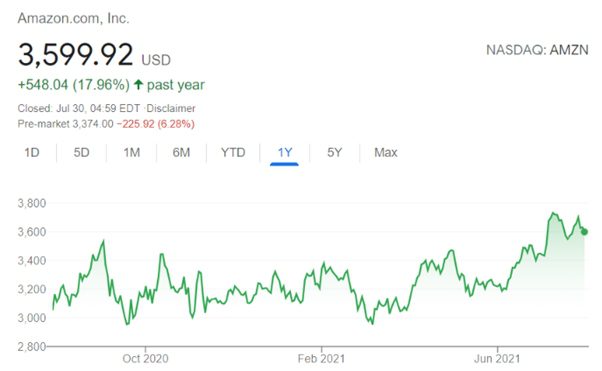 But despite the impressive revenue growth figure it still fell short of analysts’ expectations for $115.42 billion, disappointing investors. Amazon’s digital advertising and cloud computing businesses continued to grow quickly but there was investor concern over a notable slowdown in e-commerce growth which has become a victim of its own success over the past year and a bit.

In most contexts, sales growth of 22% for Amazon’s domestic North American market would be a tremendous result. But not in this context as it represented only about half the rate of growth achieved over the previous four quarters. The inevitable slowdown as lockdown restrictions around are scaled back and e-commerce starts to compete with commuting expenses, shops, restaurants and tourism also comes at a delicate moment for Amazon.

Founder and long-term chief executive Jeff Bezos has stepped down from the day-to-day running of the company, though will retain his role as executive chairman. His replacement as CEO is Andy Jassy, the enduringly successful former head of the AWS cloud computing division.

Amazon’s forward guidance for third-quarter sales anticipates a continuing deceleration of growth rates to 16% and overall revenues of between $106 billion and $112 billion. Operating income is expected to fall between a relatively wide range of $2.5 billion to $6 billion. That would represent a fall on the $6.2 billion generated over the third quarter in 2020.

AWS continues to be the group’s engine of growth with turnover up 37% to $14.8 billion for the high margin cloud computing business, despite increased competition from rivals Microsoft and Google.

Amazon has also seen its overheads soar alongside revenues over the course of the pandemic. It has attempted to capitalise on the acceleration of the move towards a digital economy by hiring aggressively and investing billions into expanding and further automating and improving its logistics network. The company employed a total of 1.35 million people globally as of the end of June, with 45,000 of those based in the UK. The workforce has almost doubled from the 798,000 employed at the beginning of 2020.