It pays to own 11% of one of the most valuable companies in the world, as Amazon founder and chief executive Jeff Bezos discovered on Monday as he became $13 billion (£10 billion) richer over just 8 hours as the company’s share price surged. Monday’s gains took Bezos’s increase in personal wealth to a whopping $74 billion in 2020. He is worth an estimated $189.3 billion, which is more than the $183 billion nominal GDP of Qatar – one of the world’s largest gas exporters.

Amazon, which is due to publish its financial results for the second quarter of 2020 after markets close on Thursday, July 23rd, has been one of the winners of the coronavirus pandemic lockdown. The e-commerce giant has benefitted from a rise in online shopping over months when traditional bricks and mortar competition was shut down for months.

Amazon Prime, the company’s subscription service that offers perks such as 1-day delivery of online purchases as well as access to the company’s Netflix-rival video content streaming platform and live sports including some football matches from the English Premier League, has also benefitted.

Amazon Web Services (AWS), the market leader in public cloud computing services, has also been boosted as more business functions have been moved online as office staff worked from home and planned physical events went virtual. The sector’s already stellar growth rate is expected to increase further ahead of schedule as digital transformation accelerates as a result of the global pandemic. 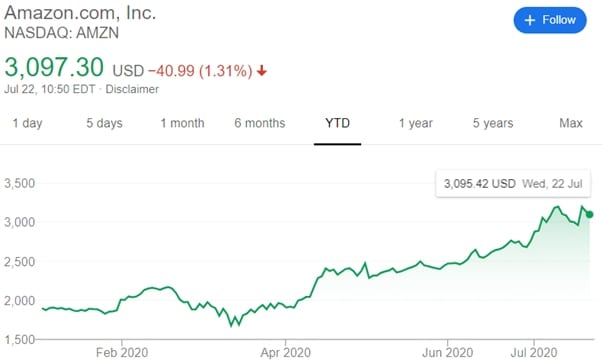 The recent upsurge in Amazon’s value means that Bezos will have hardly even noticed the impact of the 19.7 million shares in the company his ex-wife MacKenzie Bezos received at their divorce. The former Mrs Bezos’s own fortune has now risen by $4.6 billion, making her the 13th richest individual in the world.

Mr Bezos, 56, is not the only tech billionaire to see his wealth rocket this week. Tesla’s Elon Musk yesterday added $2.1 billion to his own bank balance after the electric car maker’s recent share price gains unlocked a share bonus payout. Having seen its value almost quadruple this year, Tesla is now the most valuable automaker in the world, despite recording just a fraction of the revenues and profits of traditional rivals such as Toyota, Volkswagen, General Motors and Ford.

Both Bezos and Musk are ploughing their vast fortunes into the new space race. Mr Bezos is the co-founder and majority shareholder in Blue Origin and Mr Musk of SpaceX. Both companies are developing reusable rocket technology designed to significantly reduce the cost of launching satellites or missions to space stations, the moon and, potentially one day, Mars.

In February this year, Mr Bezos also committed $10 billion of his fortune to fighting climate change.