After Google was hit by a €220 million fine by France’s competition regulator, reports today suggest Amazon could be next giant tech company to fall foul of EU watchdogs. Luxembourg’s data protection commission is recommending the online retailing giant be fined at least €350 million for violations of the EU’s strict General Data Protection Regulation (GDPR) laws.

The news was reported by the Wall Street Journal yesterday but, as was the case with Google, Amazon investors have shown little sign of concern with the company’s share price actually up over 2% yesterday and afterhours trading indicating it will open flat today. 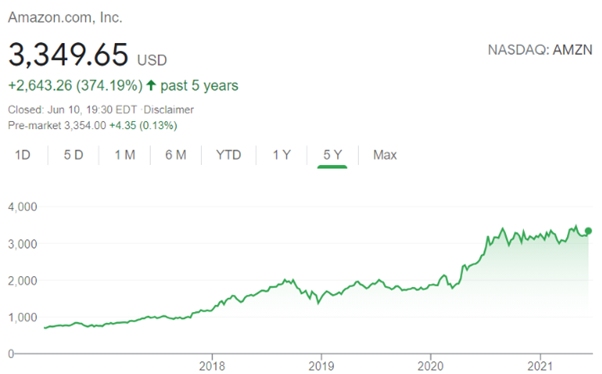 The Wall Street Journal reports a draft decision by the Luxembourg regulator is being circulated among EU member states, with general agreement GDPR rules have been breached. The internet privacy rules were introduced by the EU three years ago and oblige companies to seek active permission from users before being allowed to process any of their personal information.

To date, the highest fine handed out for GDPR breaches was €50 million paid by Google after it previously fell foul of French regulators in 2019. Amazon’s alleged breaches are being pursued by Luxembourg’s privacy regulator because the company has its EU headquarters in the tax-friendly Grand Duchy.

Privacy rights campaigners in Europe have been urging regulators to clamp down on Amazon for some time due to what they say is its practice of carrying out behavioural analysis of customers in order to then serve them targeted advertising. Activists insist Amazon should obtain permission from users before being allowed to analyse their behaviour to then target ads to their personal profiles.

The second biggest company in the world after Apple, Amazon is worth $1.69 trillion and has interests in cloud computing, where it is the global market leader, as well as video and music streaming, online groceries shopping and an online pharmacy, as well as dominating ecommerce for consumer goods. The company employs 1.27 million people globally, has 40,000 workers in the UK and generated revenues of $386.1 billion last year for a net income of $21.3 billion.

By law, EU regulators can fine companies up to 4% of annual revenue for serious breaches of GDPR. But while a €350 million fine would be by far the biggest ever handed it, it would equate to just 0.1% of Amazon’s sales in 2020. Explaining why investors have reacted nonchalantly. However, a fine in the hundreds of millions of euros would be a further sign regulators around the world are stepping up their efforts to reign in the biggest tech companies.