2020 may not have been kind to many companies around the world thanks to the Covid-19 pandemic, but it is fair to say Amazon is not one of them. The ecommerce giant’s share price has soared by around 85% since the beginning of the year as a result of an accelerating trend towards online shopping online while stuck at home during lockdown. 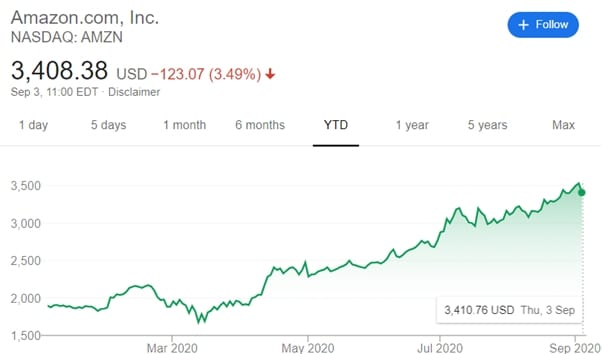 One positive outcome of that for a UK economy and jobs market there are fears over for coming months is that the U.S. tech giant has today announced plans to create 10,000 new permanent roles in Britain this year. The company has already hired an additional 3000 employees this year to cope with increased demand over lockdown. Many of those roles were initially temporary positions that will now be made permanent. And headcount will now be increased by another 7000 by the end of the year, taking total UK-based employees to 40,000.

Amazon is currently the third largest company in the USA after Apple and Microsoft. Saudi Aramco, the Saudi Arabia state-controlled oil giant, is the only other company to break the U.S. big tech hegemony among the biggest companies in the world. It has been quick to spot the opportunity presented by the global pandemic to ramp up operations to meet the needs of housebound consumers.

Between February and July, online spending soared by over 50% and now equates to 29% of all retail sales in the UK, according to the most recent data from the Office for National Statistics.

The new roles being created by Amazon in the UK will not only include workers to help fulfil and delivery orders from the company’s logistics hubs. There will also be new IT specialists, engineers, HR staff, finance and health and safety positions created, offering higher salaries to skilled professionals.

In addition to the 10,000 new permanent positions, Amazon will also employ another 20,000 new staff in temporary roles to cope with increased demand over the festive period. The seasonal positions will mainly be at its distribution centres and three “pop-up” warehouses that will extend logistics capacity.

Stefano Perego, Amazon’s vice-president of European customer fulfilment stated that the company’s new employees will benefit from “competitive wages and comprehensive benefits starting from day one”.

“Our people have played a critical role in serving customers in these unprecedented times and the new roles will help us continue to meet customer demand and support small and medium-sized businesses selling on Amazon.”

Despite the fact that it is hard to criticise Amazon on remuneration levels for entry-level roles, the company has faced criticism over working conditions in its warehouses and squeezing third-party companies selling products on its marketplace. But the company has also committed $4 billion in capital expenditure globally to make its working conditions and distribution network “Covid-secure”. The investment will fund PPE, coronavirus testing capacity and conditions which allow for social distancing in the workplace.

The extent of the hiring spree is also being taken as an indication of Amazon’s long term confidence in the UK economy. UK business secretary Alok Sharma commented:

“The Government remains deeply committed to supporting retailers of all sizes and we continue to work closely with the industry as we embark on the road to economic recovery.”

A majority of the thousands of new jobs will staff three new distribution warehouses located in Sutton-in-Ashfield, Durham and Darlington. They will all represent a new breed of Amazon warehouse fitted with state-of-the-art robotics technology. The Darlington facility started operating in May and is now being scaled up, while the Durham and Sutton-in-Ashfield sites will open in late October.