Struggling Sirius Minerals, the developer of a controversial but potentially hugely valuable fertiliser mine located in the North Yorkshire moors, looks set to be rescued by a cash bid from Anglo American. Sirius has been in major trouble since its September failure to secure the additional $3.8 billion investment it need to complete its potash mine and start production.

The Sirius Minerals share price had plunged from 37.25p in August 2018 to 3.5p at the end of 2019 – a drop of over 90%. Anglo American’s unexpected proposal is to buy the entire company for a cash offer of 5.5p a share, valuing Sirius at just £386 million. However, with the future of the Woodsmith mine near Whitby reliant on the injection of billions to bring it to the point it is cash flow positive, and no rival bids in sight, it looks as though the Anglo American offer may be its only choice.

Anglo said yesterday that it had identified the Woodsmith project “as being of potential interest some time ago, given the quality of the underlying asset in terms of scale, resource life, operating cost profile and the nature and quality of its product”.

The news saw the Sirius Minerals share price leap to around the proposed 5.5p Anglo bid level yesterday morning, though it has since slipped back towards 5.35p today. Anglo American’s share price took a 2.5% dent yesterday, with the FTSE 100 miner’s investors clearly concerned over the project’s risks and costs, despite its recognised potential. 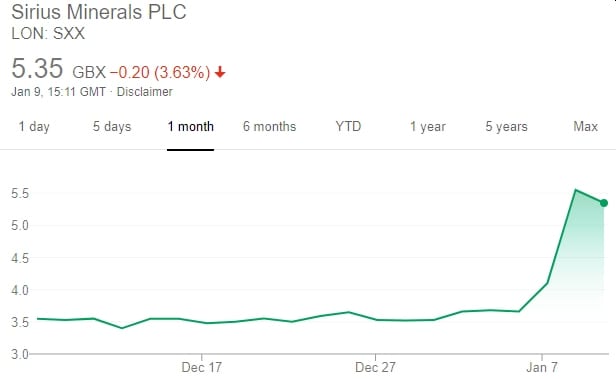 Sirius Minerals has proven to be a nightmare for investors, including over 80,000 small retail shareholders. Even if the Anglo American rescue deal goes through, most will still be left facing significant losses on their original investment. However, the deal would be better than nothing, which was starting to look like a realistic possibility.

Anglo taking over the project would also be a major boost for the surrounding North Yorkshire area. Around 1000 locals had been employed in the development of the mine but hundreds were then made redundant as Sirius started to run out of cash. A completed and operational Woodsmith would be the world’s largest polyhalite mine. Polyhalite is a kind of potash fertiliser.

The mine is so expensive to develop because it involves mining and extracting polyhalite from almost a mile below the surface of the moors and then transporting it to Teeside for processing via a 23-mile subterranean tunnel. But if anyone has the resources to complete the development it is Anglo American. One of the world’s largest mining companies, Anglo last year realised underlying profits of $9.2 billion. Its mining assets produce commodities from copper and iron ore to coal, diamonds and platinum.

Having recently taken on the $5 billion development cost for a Peruvian copper mine, its biggest project in over ten years, Anglo didn’t seem like a likely candidate to take on the cost and commitment of Woodsmith at this particular juncture. However, the company has clearly decided the knock-down price the deal could be done at as a result of Sirius’s problems, made taking the plunge worthwhile.

Investec analysts commenting on the deal in a note to investors yesterday wrote:

“This is not completely out of Anglo’s area of expertise as it has owned phosphates assets, before being forced to sell them in 2015/2016 to repair the balance sheet.”

Anglo commented that it is “committed to its disciplined capital allocation framework”.  If the takeover does go ahead, the miner plans to develop the Woodsmith mine“broadly in line with Sirius’ revised development plan”. That will involve spending about $600 million over the next two years to complete the riskiest elements of the project.