The Ant Group IPO, which had been set to become the biggest in history with at least $34 billion raised at a valuation of over $313 billion, has been halted. The record-breaking dual listing in Hong Kong and Shanghai had been due to go ahead tomorrow (Thursday October 5th). But the Shanghai stock exchange has suspended the listing following talks yesterday between CEO Jack Ma and China’s financial watchdogs.

The turn of events is a major shock, with one director at a Shanghai-based broker quoted by the Financial Times commenting “I’ve never seen an IPO suspended at this stage.” He suggested the decision to block the listing looked like it had been a “very last-minute thing”, before concluding:

“It’s in no one’s interest to cancel the [completed share] allocations at this stage. I don’t think there’s any precedent for this type of situation.”

The turn of events is a body blow do Jack Ma, the founder of Alibaba and Ant Group, which was spun out of the Chinese ecommerce giants as a stand-alone fintech enterprise. The unanticipated suspension of the listing followed, said the Shanghai stock exchange “supervisory interviews” yesterday conducted between Mr M and regulators. The exchange said there were also “other major issues”, which included changes in “the financial technology regulatory environment”.

The exchange delivered its verdict to Ant Group and its underwriters, which include JPMorgan, Goldman Sachs and China International Capital Corp, with:

“This material event may cause your company to fail to meet the issuance and listing conditions or information disclosure requirements,” it added. “Our exchange has decided to postpone the listing of your company.”

Ant Group’s payments business, cornered on the Alipay application, has become the world’s largest since being spun out of Alibaba in 2004. The company processed a whopping $17 trillion in transactions over the year to June; more than either Visa or Mastercard processed over the same period.

Ant is also suspending its Hong Kong listing as a result of “material matters relating to the regulatory interview” yesterday, which involved Mr Ma and several other group executives. Investors that have already paid “application monies”, in connection with taking part in the IPO will be refunded.

The Alibaba share price dropped a little over 8% on Wall Street yesterday evening and 7.5% in Hong Kong this morning. Alibaba still owns 33% of Ant Group. 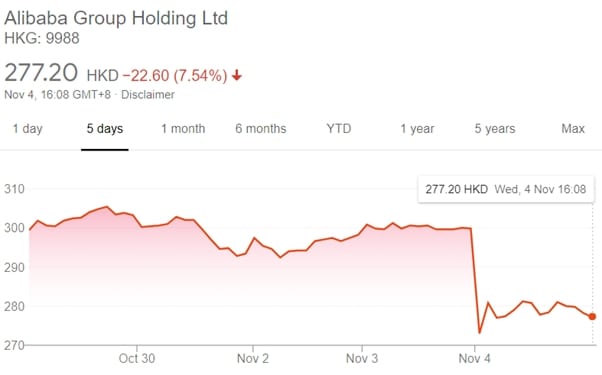 Ant Group issued an apology to investors who had committed to the IPO, telling them it would “keep in close communications with the Shanghai Stock Exchange and relevant regulators . . . with respect to further developments of our offering and listing process”.

He said Ant’s role would be in offering financing to the kind of innovative but asset-poor companies and individuals that formed the digital economy. China’s traditional banks typically want the kind of collateral against loans that this kind of company and individual often simply doesn’t have.

It now looks as though the attack may have rubbed people within China’s state-run banking sector up the wrong way. Mr Ma, together with Ant Group chairman Eric Jing and chief executive Simon Hu were interviewed by the People’s Bank of China and the country’s banking, securities and foreign exchange regulators.

Guo Wuping, a banking regulator official, offered some insight into the reasons why Ant Group’s IPO was torpedoed. In an opinion piece published by Chinese state media on Monday, Mr Wuping expressed concern over higher charges applied by fintech companies such as Ant offering consumer finance products. He said this, and their less strict loan approval criteria, often lured young people and low income groups into overspending and “debt traps”.

New draft regulations for online lending were released on Monday by the People’s Bank of China and the banking regulator. They involved the proposal to cap online loans at a little under $45,000, or up to one third of the borrower’s annual income, whichever is lower.

Ant has said that it will seek to implement the “advice” given at Monday’s interviewers as quickly as possible. Presumably with the goal of reactivating the IPO at some point over the course of 2021.

Deliveroo expects the rate of growth to decelerate as lockdowns ease, but the extent... END_OF_DOCUMENT_TOKEN_TO_BE_REPLACED