Online electrical goods retailer AO World yesterday saw its share price rise by over 30% thanks to a surge in sales over the Covid-19 pandemic. Publishing its half year results yesterday, the online-only retailer detailed 57% growth in sales over the six months to the end of September, compared to the same period a year earlier.

The company is now worth more than bricks-and-mortar competitor Dixons Carphone, whose own share price has plummeted, while AO’s has soared. 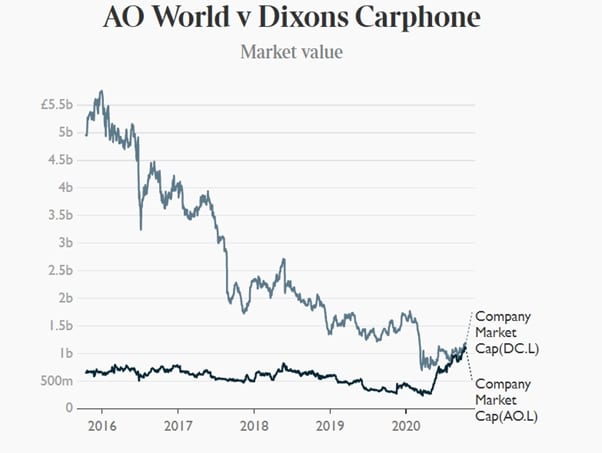 AO World has proven to be one of the beneficiaries of the acceleration of the long standing trend towards ecommerce over 2020, boosted by lockdown periods over the pandemic ruling out traditional shopping for extended periods. Lockdown restrictions also drove demand for laptops and other home computer equipment as millions of formerly office-based professionals suddenly found themselves working from home for months on end.

Demand for new fridges, freezers and other home appliances have also boomed with people spending most of their time at home during the working week.

While traditional bricks-and-mortar shops have now largely reopened, many consumers preferred to stick to online shopping, either having become newly accustomed to the experience, or remaining cautious about unnecessary visits to public spaces. John Roberts, AO World’s chief executive and founder commented:

“The last six months of trading have been like no other during my two decades in the business. AO was in good shape coming into this financial year and the global, structural shift in customer behaviour to online, accelerated by Covid, emphasised our strengths.”

The company’s share price has now gained 57% over the course of 2020, including the 30.7% gain yesterday, which drove AO’s market capitalisation to £1.4 billion. 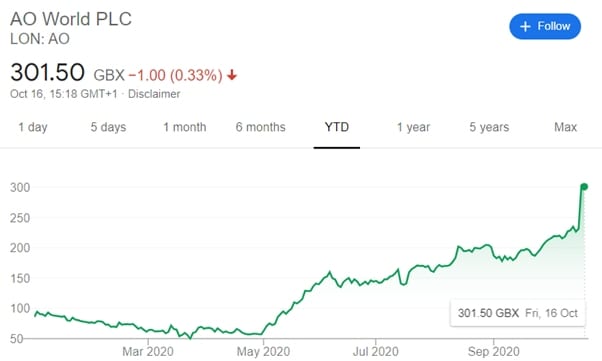 For early investors that backed AO World during its IPO six years ago, however, this year’s gains to 285p a share, have simply seen them break even. It’s the same price the online retailer floated at 6 years ago.

Online retail stocks have been re-valued by investors this year, in many cases overtaking the valuations being applied to traditional physical retailers. Online groceries and warehouse technology company Ocado last month briefly outstripped the valuation of Tesco, the UK’s largest supermarket chain.

The fortunes of AO World’s bricks-and-mortar rival Dixons Carphone have been the inverse of the online retailer’s. In May, Dixons Carphone reported that its annual profits had been cut in half and it has since shut all 531 of its physical stores. However, despite being primarily known as a physical retailer, Dixons Carphone made £1.6 billion in online sales revenue last year, to AO World’s £900 million.

And while Dixons Carphone is moving online, AO is going in the opposite direction, with the company this week announcing the trial of five concessions selling electrical appliances to be opened in Tesco supermarkets. As well as selling household electrical appliances, the concessions will also offer a tech advice service that seeks to replicate the model of Apple’s Genius bars.

Mr Roberts founded AO World in 2000, with the decision legendarily the result of a £1 pub bet. The company now employs over 3000 staff and sells over 12,000 products. Its serviced around 7 million customers over the past 20 years. However, it’s not had a smooth ride as public company and a failed attempt at international expansion in the Netherlands resulted in a series of profit warnings. Its German business has fared better and is expected to imminently achieve profitability.

AO World is now preparing itself for what it expects to be a busy Christmas period, with Mr Roberts commenting “we expect peak to be extremely big and we are tooling up for it”.

That might be a challenge, with the company saying it has been recently operating at capacity, despite opening another three warehouse sites in the UK this year, doubling capacity. If AO’s recent success continues, its staff are in line for a windfall after shareholders approved an employee incentive scheme in August that will see them split a £240 million bonus if the share price quadruples to £12.55. Mr Roberts, who bought back £1.7 million of shares in the company this summer has said he will hand his own payout to charity if the feat is achieved.