Apple has this week held on to its crown as the world’s most valuable company after the company’s share price closed last week at a new record high. The boost a strong recent quarterly report has given, despite it demonstrating that the company’s margins are in gradual decline, has taken share price gains so far recorded over 2019 to a huge 65%. It’s the company’s most impressive run of market capitalisation gains in ten years and represents an over-performance of as much as 300% as compared to the gain of the S&P 500 benchmark index. 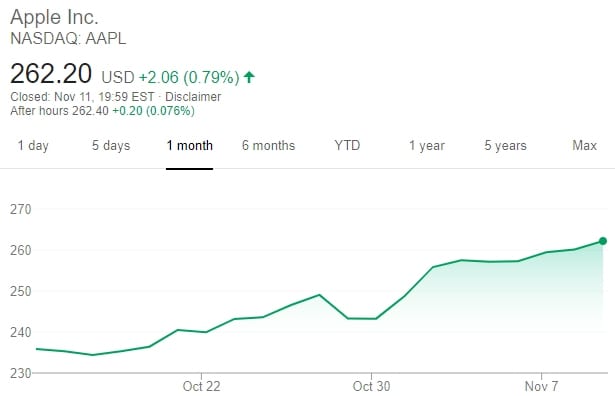 To put the $407 billion Apple has added to its value over the first 10 and a bit months of the year in context, the sum is almost the same as the entire market capitalisation of the USA’s biggest bank by assets – JPMorgan Chase. It has also allowed Apple to claw back the value gap until recently opened up by Microsoft, which is itself up 44% over the course of this year.

Analysts are putting Apple’s resurgent popularity with investors down to its newfound status as a refuge among uncertain markets and a shaky outlook for global economic growth. Michael Kagan, a portfolio investor with New York’s Clearbridge Investments who hold Apple stock, commented for the Financial Times:

“People are looking for certainty in an uncertain market. Investors love that Apple generates so much cash flow — it’s a cash machine even though it’s a relatively mature business.”

Apple’s cash generation qualities are particularly striking against a backdrop of a year that has lacked any big, notably successful new hardware launches. The company’s big launch of 2019 has been Apple TV+, its new video streaming subscription service that enters an increasingly crowded marketplace dominated by Netflix. Disney and AT&T are also launching their own streaming subscription products. For the foreseeable future, even if successful, Apple TV+ will represent a drain on capital rather than adding to profits, as the company invests large sums in commissioning original content and growing its market share.

The iPhone 11, launched in early autumn, has been met with a positive reception but reviews are more along the lines of Apple having caught back up with rival models that surpassed it on price to quality ratio last year. That’s a changed landscape from a decade ago when the iPhone was considered to be the standard setter for the smartphone market.

Apple’s 2019 share price gains have been accentuated by the drop towards the end of last year that saw 31% wiped off the company’s value between October and markets closing for New Year. That slide came amid a wider tech sell-off and warnings issued by the company that the trade tensions between the USA and China were expected to mean lower sales than anticipated made in the latter. Chinese consumer sentiment for products from U.S. companies took a hit. That has resulted in a drop in revenues and profits this year but demand from China has held up better than many expected, though the slide still resulted in a 2% drop in overall revenues to $260 billion.

In the eyes of investors that seems to have been compensated for by a policy of stock buybacks, the company has spent the most of any S&P 500 company in rebuying stock worth $320 billion over the last ten years, and positive signs that services revenues are on track to pick up the slack of falling iPhone sales.

“The market puts a premium on software over hardware. Software is less cyclical, enjoys higher margins and is easier to protect.”

There is also an argument that despite its 2019 gains, Apple is still trading on a multiple that compares favourably to those of other large tech companies. The company’s share price currently represents a multiple of 20 times earnings over the previous 12 months. The average 12-month trailing multiple of tech companies that are constituents of the S&P 500 is 24, suggesting there could even still be room for further gains.

Analysts at Bank of America say there is “significant” potential in the stock. They expect “relative outperformance” heading into the next iPhone cycle when Apple is widely expected to launch its first 5G smartphone.

While most still caveat the argument with the get-out clause it is far from... END_OF_DOCUMENT_TOKEN_TO_BE_REPLACED

Natural gas prices have rocketed with Russia accused of managing supply to drive up... END_OF_DOCUMENT_TOKEN_TO_BE_REPLACED

After their valuations boomed in 2020, the UK’s online fast-fashion giants of Asos and... END_OF_DOCUMENT_TOKEN_TO_BE_REPLACED

The dust has almost settled on the months-long takeover battle between U.S.-based private equity... END_OF_DOCUMENT_TOKEN_TO_BE_REPLACED