The Apple share price climbed by almost 3% yesterday, with gains extending by another 1.2% in afterhours trading. If those hold into this morning’s Wall Street session, the stock will have set a new record high, taking the company’s value to above $1.4 trillion.

The boost to share price was spurred by the announcement of its first quarter results over the three months that ended December 28th. iPhone sales figures breezed past analyst estimates and Apple set a new record profit figure over a quarter. Revenues estimates were also beaten. 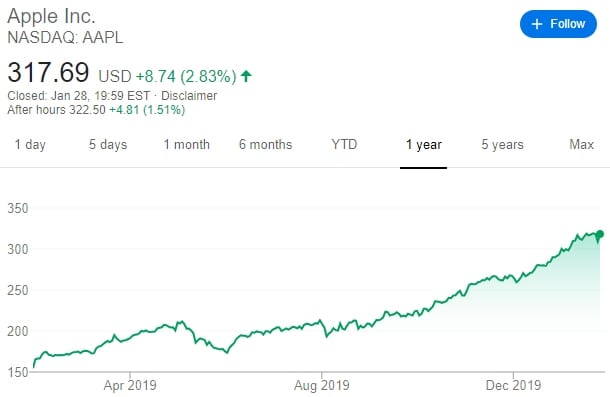 While Apple CEO Tim Cook assigned the strong figures to better than expected demand for the new iPhone 11 model released last autumn, investors are also encouraged by how smoothly the company is managing the transition from ‘peak iPhone’ to a revenue model that services contribute much more to than in the hardware-centric past. Apple Music, the App Store, Apple’s new Apple TV+ and even the Apple credit card last year launched in partnership with Goldman Sachs are all seeing strong growth.

Less new iPhone handsets are being sold than in the past, as users wait longer before upgrading to the latest model and increased competition from Android-based rivals. But the now more than 1.5 billion Apple devices in use around the world has offered Apple the perfect platform to use that as a shop window for new and improved services offerings.

And despite falling sales numbers, the increased margins provided by the latest generations of iPhones, which now start at around $1000 for top-of-the-range models, have seen iPhone revenues continue to climb. They hit $56 billion over the company’s first accounting quarter compared to $52 billion over the same three months a year earlier. That was well ahead of analysts’ forecast for $51.4 billion.

Revenue from services generated over the quarter reached $12.7 billion, almost 20% up on the equivalent quarter 12 months earlier. They were, however, shy of forecasts for $13.1 billion. Mac sales also saw revenues slide to $7.2 billion from $7.4 billion and iPad sales dipped to $6 billion from $6.7 billion. Mac revenues were in line with forecasts but the contribution made by iPads fell short of the $6.73 billion predicted. Sales of wearables, home devices and accessories, including the hugely popular EarPod headphones climbed to $10 billion from $7.3 billion, pulling ahead of a $9.9 billion estimate by a nose.

That mixed bag was clearly more than compensated in the eyes of investors by first quarter profit increasing by $2.2 billion to $22.2 billion for the three-month period, fuelled by revenues jumping to $91.8 billion from $84.5 billion. Those figures were ahead of both Apple’s own forward guidance and analyst estimates.

Despite iPhone revenues being driven by more expensive new handset models, Apple will also look to tap into the market for whom those prices are out of reach. A budget iPhone model is expected to be launched in March. Confidence around sales is clearly high within the company, with suppliers instructed to up their production to 80 million iPhones over the first half of the year – a 10% increase on last year.

Second quarter projections saw Apple predict revenues of between $63 and $67 billion – when analysts had forecast $62.3 billion. The width of the guidance range is due to the unknown impact the coronavirus outbreak could have on the global, and particularly Chinese, economy in coming months. China is Apple’s third largest market after the USA and EU.

Natural gas prices have rocketed with Russia accused of managing supply to drive up... END_OF_DOCUMENT_TOKEN_TO_BE_REPLACED

After their valuations boomed in 2020, the UK’s online fast-fashion giants of Asos and... END_OF_DOCUMENT_TOKEN_TO_BE_REPLACED

The dust has almost settled on the months-long takeover battle between U.S.-based private equity... END_OF_DOCUMENT_TOKEN_TO_BE_REPLACED