The Apple share price has lost 3.26% in afterhours trading despite the iPhone maker posting results that revealed the company’s best ever quarter of revenues and profit. Year-on-year revenue growth for the three months to the end of the year came in at an impressive 21%, and a final figure of $111.4 billion. The sales boost was in large part driven by a sharp upturn in demand for iPhones from Chinese consumers. 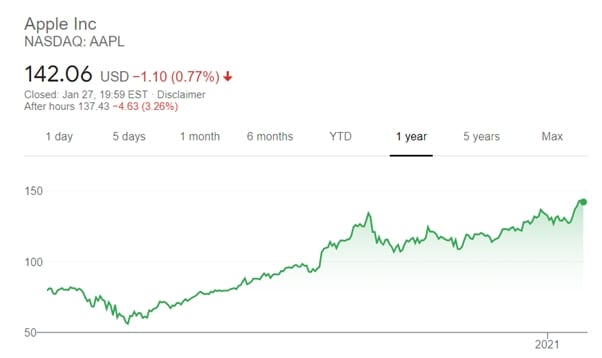 The record results were described by Apple chief executive Tim Cook as an “enthusiastic customer response”. Profits were up 29% to $28.8 billion, ahead of analyst forecasts.

Yesterday was generally a very positive one for America’s tech giants, with social media company Facebook, Apple’s fellow member of the big tech group of FAANG stocks, also reporting record profits and sales. Another powerful quarter will go some way to allaying fears over a potential major tech stocks correction after months of spectacular games. At least in the immediate future.

Apple’s market capitalisation currently stands at a huge $2.4 trillion, making it the most valuable publicly-listed company in the world. It makes and sells a range of hardware and wearables, including iPad tablets, Mac computers, earphones, and the Apple Watch.

The company is also focusing on reducing its financial dependency on iPhone sales, which still account for over 50% of overall revenues. Its strategy is to manage an evolution into a more services-based company by increasing the share of revenues made up by selling apps through the App Store and subscription services such as iCloud cloud storage facilities and Apple TV+, its year-old film and television streaming service.

But the presumption over the past couple of years that Apple had probably reached ‘peak iPhone’ sales as a result of the trend towards smartphone owners updating their handsets less frequently and increased competition, is proving premature.

The delayed launch of the new 5G-supportive iPhone 12 due to coronavirus pandemic complications with supply lines and manufacturing meant it was the last quarter of the year that saw the full benefit. As a result, a new quarterly record for revenues directly derived from iPhone sales, $65.6 billion, was set.

Another bright spot was 21% revenue growth from Mac computer sales to $8.68 billion and 41% growth in iPad revenues to $8.44 billion. Sales from wearables, home devices and accessories, which form a single division, were up 30% to $12.97 billion.

In total, Apple now has 1.65 billion active devices in use around the world. That’s an improvement from 1.5 billion a year ago. And Apple is far from resting on its laurels, setting its huge pile of cash to work on longer term initiatives such as a new push into the driverless car space and the rumoured development of virtual reality (VR) headsets.

There also appears to be a big mystery project in the works. This week it was announced that Dan Riccio, Apple’s top hardware boss, is transferring to a new role, where he will focus on a project the company has not yet disclosed.

Elsewhere in big tech, Facebook reported a 33% rise in its quarterly revenues to $28.1 billion. That was significantly ahead of expectations, with net income up 53% to $11.2 billion over the last three months of last year.

However, share price declines for both companies in the wake of their respective reports show just how high the bar has been set by their recent valuations. Even smashing Wall Street forecasts is no longer enough to keep investors completely happy when the companies urge some caution over potential slowdown in sales growth as the year progresses.

Companies are wary that while the coronavirus crisis has generally been a big boost for tech sector revenues by accelerating the trend towards a more digital economy, economic trouble ahead is expected to start to hurt spending at some point.