Just over 2 years since Apple became the first public company in history to reach a $1 trillion valuation in early August 2018, the iPhone maker has smashed through the $2 trillion ceiling. The company’s share price has continued to strengthen over the course of the Covid-19 pandemic, thanks to strong demand for Apple hardware such as the iPhone, iPad and MacBook laptop, as well as services including the App Store and new Apple TV+ subscription service.

Saudi Arabia’s state-backed oil company Saudi Aramco briefly reached a $2 trillion valuation shortly after its public debut last December but Apple is the first U.S. company to ever achieve the level and the first on a major international exchange. Having last month breezed past Aramco’s current $1.8 trillion valuation, Apple is again the most valuable company in the world. 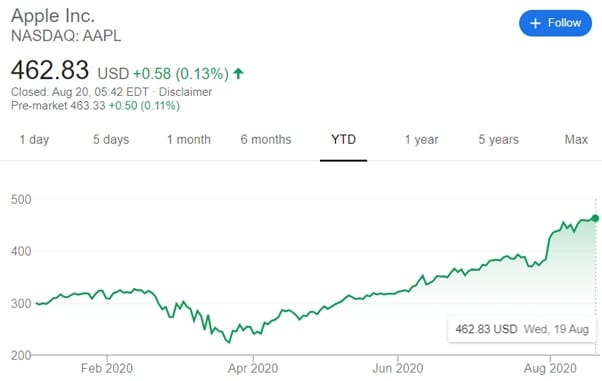 The next milestone for Apple, which the company will hope to achieve before the end of the week, will be for the intraday high achieved mid-morning on Wall Street yesterday, to close out a session. The Apple share price later gave up 0.1%, or 58 cents, to bring the company’s market capitalisation down to $1.979 trillion by the close of the trading day.

If Apple can consistently hold on to a valuation of over $2 trillion remains to be seen, with concerns a tech bubble has formed in recent months. But for now, the company which was legendarily started in a garage in Los Altos, California 44 years ago will enjoy its view from the top of the world after its rise from a $1.5 to $2 trillion valuation was completed in just 49 days.

It’s just over a year since questions were asked over whether the Apple growth story was coming to an end. Slowing growth in iPhone sales, the company’s engine, was inevitable eventually and while Apple always remained confident it could grow its services unit to compensate, there had to be doubt as to how quickly and effectively that transition could be managed.

But the slowdown in hardware sales growth has not only been far less severe that many analysts expected but services revenue growth has been exceptional. Oprah Winfrey’s now legendary comment at an event to publicise the upcoming launch of Apple TV+ was “they‘re in a billion pockets, y’all”.

If her commercial nous was ever in doubt before that observation, there can surely no longer be any question of her business acumen. She chose to sign up to produce content for Apple TV+ because she recognised how powerful that leverage was for the new subscription streaming service. The sheer number of iPhone and other Apple hardware users out there, now estimated at around 1.4 billion in active use, has proven a hugely lucrative market for the company to sell new services into. That has more than made up for a gradually lengthening cycle before consumers upgrade to the latest models.

Despite Apple’s stores being forced to shut for months during the Covid-19 pandemic, the company’s sales managed a remarkable 11% growth rate over the third quarter, to $59.7 billion. That growth was also satisfyingly spread across all 5 of Apple’s product categories and all international geographies. Apple’s performance was good enough to provoke Goldman Sachs analysts to admit to clients:

“It turns out that we and consensus weren’t even in the ballpark in terms of what was possible.”

However, while there is no denying Apple’s commercial success, its phenomenal $2 trillion valuation has also been made possible by a huge flow of capital into the biggest American technology stocks. That’s driven the unexpectedly strong stock market revival from the March sell-off as investors essentially treat big tech as a safe-haven asset.

The share prices of Microsoft, Amazon, Facebook and Alphabet have all also benefitted. The digital economy has been least effected by lockdown measures, and many companies have actually benefited. Alphabet and Facebook’s digital ad revenues have been hurt but otherwise, being forced to spend more time at home as increased consumption of digital products and services as well as accelerated the trend towards ecommerce accounting for a larger share of consumer spending.

Apple’s share price has also been boosted by the company’s stock buyback programmes, with $360 billion of its own shares bought back by the company since 2012. That’s more than any other US company.

However, for investors who don’t already own Apple stock, it is worth noting that at a price to earnings ratio of x35, the stock’s highest level since 2007, there should be some doubt as to how much growth can realistically be left in the near future. Some analysts have expressed the belief we are now in a new tech bubble, which could see big valuations vulnerable to economic and financial system shocks over coming months as the impact of the Covid-19 pandemic hits home.