Technology giant Apple has started the 2020s at the same blistering pace as the iPhone maker ended the previous decade after its share price yesterday broke through the $300 level for the first time. Apple’s share price gained 2.28% over the first day of trading in the new year to reach $300.35. Many analysts and market observers had believed Apple’s growth story had ended with ‘peak iPhone’, but the company’s evolution towards services-driven growth has gotten off to a strong start.

Yesterday’s gains for Apple came amid a wider advance for the major Wall Street indices and global equity markets more generally, as a strong end to 2019 rolled over into the new year. Hopes that a U.S.-China trade deal to end an escalating tariffs war between the two economic superpowers and greater clarity on Brexit following the UK’s December general election boosted stock markets over the last few weeks of last year. Optimism was further fuelled yesterday on news that the Chinese central bank will launch a new economic stimulus programme.

Sentiment around Apple itself was also boosted yesterday as the company signed an agreement with former HBO executive Richard Plepler to produce content for its new video streaming service Apple TV+, which was launched late last year. The Netflix-style subscription service has enlisted a roster of star names, including Steven Spielberg, Oprah Winfrey and Jennifer Aniston, to make and star in exclusive video content.

Apple’s share price soared by 86% over 2019, representing its best annual gain in a decade. The advance was helped by a major correction that affected stock markets, and particularly the tech sector, over the latter part of 2018 that saw the company lose 6% over the year. However, the recovery from that slide represents only a fraction of the total gains from last year. Apple’s share price rise was also far ahead of the market, with the S&P 500 index gaining almost 29% last year and the tech-heavy Nasdaq a little over 35%. 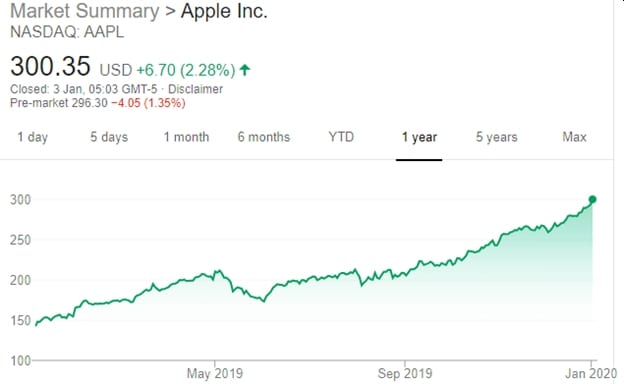 Apple CEO Tim Cook has defied the sceptics who believed he was a poor shadow of the company’s former CEO and co-founder Steve Jobs. He has successfully led the company through a volatile trading environment in China as the country’s growth slowed, the U.S.-China tariffs war, settled the shadow of the lawsuit with Qualcomm and made a success of the tiered price range of new iPhone models, particularly the iPhone 11 series.

After a period which has seen smarphone users, particularly iPhone users, begin to upgrade their handsets less frequently than in previous years, analysts believe the launch of new 5G smartphones will again see new sales soar.

Apple’s share price has now grown by over 1000% since 2009 and made the leap from $200 a share to over $300 a share between August 2018 and January 2nd 2020. The company also recently regained its crown from Microsoft as the most valuable publically traded company in the USA. Its position as the most valuable public company in the world has, however, been usurped by the late 2019 listing of Saudi Aramco, the Saudi state-owned oil company that listed 2.5% of its equity on the Riyadh stock exchange.

Natural gas prices have rocketed with Russia accused of managing supply to drive up... END_OF_DOCUMENT_TOKEN_TO_BE_REPLACED

After their valuations boomed in 2020, the UK’s online fast-fashion giants of Asos and... END_OF_DOCUMENT_TOKEN_TO_BE_REPLACED

The dust has almost settled on the months-long takeover battle between U.S.-based private equity... END_OF_DOCUMENT_TOKEN_TO_BE_REPLACED