The Apple share price has dropped by over 2% in after hours trading to add to a 1.5% loss yesterday despite the technology company announcing a new record profit thanks to soaring iPhone sales.

After a period of concern iPhone sales growth, and those of premium smartphones more generally, had entered terminal decline as users started to upgrade to the latest model less frequently, the Covid pandemic catalysed a new boom. Despite the fact lockdown restrictions have been loosened across much of the world in recent months, iPhone sales have continued to be strong. 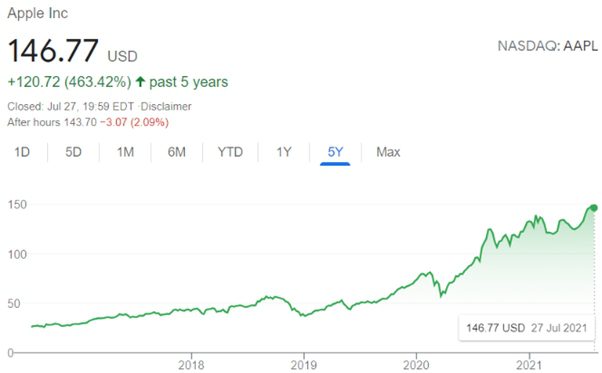 That helped Apple to third quarter revenue growth of 36% on the same period a year ago as it brought in $81.4 billion compared to analyst expectations for just $73 billion. That represented the highest ever revenue figure for Apple over the quarter as gadgets including the iPhone, iPad and Apple Watch sold in impressive numbers.

Apple chief executive Tim Cook declared China as the company’s best performing geographical region as sales grew by 60% with accessories like earbuds and the Apple Watch selling especially well. Margins have also been especially good thanks to 50% growth in sales of Apple’s highest end iPhones like the flagship 5G-enabled iPhone 12, which brought in $39.6 billion – about $5 billion more than analysts had anticipated.

Net income of $21.7 billion over the quarter to the end of June, the 3rd quarter in Apple’s calendar year, represented nearly 100% growth on the previous year. Revenues from services, a priority for Apple and seen as the engine of future revenue growth, were up 33% to $17.5 billion and for the first time made up over 20% of total turnover. Service revenues are generated from digital products like the iCloud storage facility, Apple TV+ streaming service, and the App Store.

Apple appears to have avoided being badly affected by the global semiconductor shortage which has hit the auto manufacturing industry hard though the company did say there supply constraints had some impact on Mac and iPad manufacturing.

“This quarter, our teams built on a period of unmatched innovation by sharing powerful new products with our users, at a time when using technology to connect people everywhere has never been more important.”

The fact that the Apple share price has actually dipped after the company announced a record profit for the third quarter and results generally bettering analyst expectations is an indicator on just how much the company now has to do to impress markets. However, there are regulatory and legal threats on the horizon including the ongoing court case with Fortnite-make Epic Games.

The company is disputing Apple’s App Store commission rate and policies, arguing they are exploitative of a de-facto monopoly position as gatekeeper to every iPhone or iPad owner in the world.