Are Airline Stocks A Bargain That Will Soar Again Or A Risk Too Far?

Airline stocks including Easyjet, Ryanair, Wizz Air and British Airways-owner IAG have, for obvious reasons, seen their valuations take among the worst hits of any sector during the ongoing coronavirus crisis. It’s hard to convince investors not to be sceptical when your business was almost entirely put out on ice for months on end. Especially when the countries British tourists can visit without a 2-week quarantine on return change overnight, putting tourists off taking the risk, when travel does return.

How long before quarantine-risk free international travel and tourism takes to return to pre-pandemic levels is currently anyone’s guess. It’s unlikely that all restrictions, and uncertainty around a potential short-notice return to greater restrictions, will be possible before we’re deep into next year. And even then, the outlook is muddy to say the least.

The inevitable result is an industry thrown into disarray. The finances of airlines have taken a terrible beaten over the past several months. Easyjet racked up losses of £353 million over the first half of 2020. Ryanair, whose first fiscal quarter was the three months to the end of June posted a loss of €185 million for the period, compared to a €243 million profit over the same 3 months a year earlier. IAG’s losses for the first half of 2020 came in at a staggering £3.8 billion.

All three companies have announced deep cuts to staff numbers and warned it will take years for their industry to recover. Around Europe the picture is not less bleak, with Lufthansa and Air France-KLM also registering the worst results in their respective histories. For Lufthansa, that is over 65 years.

Airline Stocks Have Plunged In Value

The share prices of all of Europe’s major airlines have, as would be expected, taken a pounding. Easyjet’s share price is down over 55% for 2020, IAG’s share price has slumped by over 66%, Lufthansa’s by almost 45% and Air France-KLM by over 61%. Comparatively, Ryanair has gotten off lightly, has staged a recovery and is only 15.27% off where it started January 2nd 2020. Wizz Air, the East Europe-focused budget airline has a share price that is remarkably now only 2.65% down on where it started 2020.

It’s been a turbulent period for airline stocks and could, in all honesty, have been worse all things considered. British Airways owner IAG’s share price plummeted to 195p in late March, when almost all airlines were grounded internationally, from 640p in mind-February. Having recovered to above 330p in early June, the AIG share price has slid back to 216.3p following new quarantine rules being introduced at short notice for first Spain and then France. 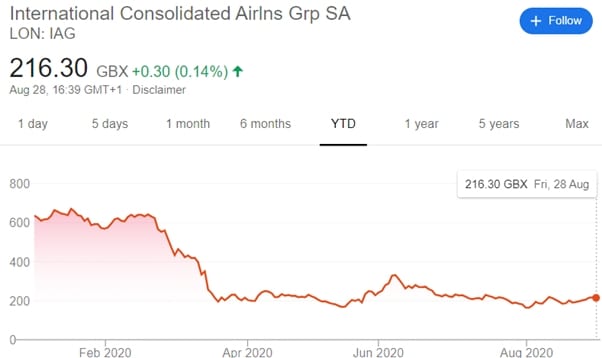 Investor confidence was not helped when renowned investor Warren Buffet wrote off the value of the airline-industry holdings his Berkshire Hathaway investment vehicle holds, selling them all at an over $3 billion loss, and voicing the opinion only a widely-available Covid-19 vaccine could save the industry.

Sir Richard Branson’s Virgin Atlantic airline filing for bankruptcy protection in the USA earlier in August hasn’t helped optimism, even if the move was a strategic play designed to secure a £1.2 billion rescue deal after the UK government refused to bail it out.

One notable feature of the Covid-19 pandemic’s impact on financial markets is the remarkable recovery stock markets showed after crashing in March as the full extent of the seriousness of the global situation became apparent. Especially smaller, mainly retail, investors quickly bet on stock markets recovering to ‘buy the (big) dip’ in March, leading to a quicker than expected recovery.

That confidence in the underlying economy’s ability to bounce back post-coronavirus has seen stock markets around the world recover much of March’s losses despite large swathes of the economy being put on hold. The recovery hasn’t been entirely even. The UK’s benchmark FTSE 100 index is still down a little over 20% for the year, and the broad-based Eurostoxx 600 a little over 12%. 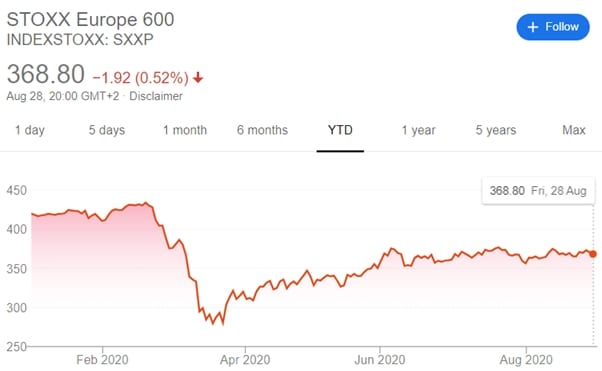 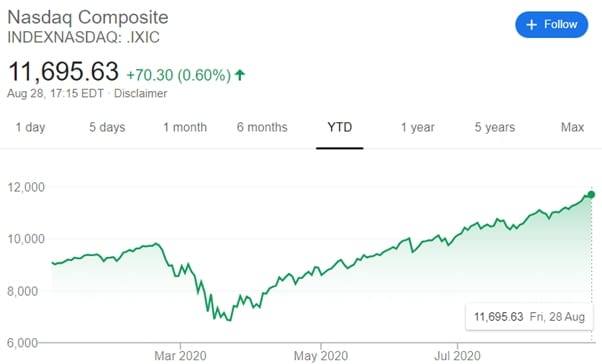 The performance of the major U.S. indices is largely down to huge rises for the biggest tech companies such as Apple, Amazon and Microsoft, which have benefitted from lockdown accelerating digital transformation. Just six companies, the FAANG tech giants plus Microsoft, account for around 70% of gains.

The more modest, but still impressive, recovery of indices in Europe, may be more realistic than in the USA given the recession we are now in and the blow to the real economy. But the fact remains that investors have remained optimistic and are looking at the medium to long term, almost disregarding current revenue losses for many industries.

The civil aviation sector has been among the slowest to recover in terms of stock market valuations, with the notable exception of the Wizz Air and, to a lesser extent, Ryanair. That’s understandable given the extent of the impact the pandemic has had on the ability of companies in the sector to generate revenues and the fact that the outlook until the end of the year and early 2020 is still far from certain.

But the general mood of investor optimism has not entirely neglected airline stocks. They have, according to data from major UK online stockbrokers, remained popular with investors. Presumably again with a view to cashing in on their eventual recovery. Interactive Investor, the UK’s second largest retail stockbroking platform, says IAG was the fourth most traded share on its platform in July. Easyjet’s shares were the 13th most traded.

And that wasn’t down to investors cutting their losses and selling. For both IAG and Easyjet, the buy-sell split was 65%-35% in favour of buyers. The broker’s Richard Hunter explained that the positive investor sentiment is down to an opportunity being spied to pick up airline stocks at knock-down prices now, with a view to benefiting in the long term. In mid-August he said:

“Our customers are well aware of the challenges facing airlines, but where some see obstacles, others see opportunity. The market consensus on IAG is that it remains a strong buy. The company entered the pandemic with a solid balance sheet, subsequently reinforced by the raising of an extra €2.75 billion from existing shareholders using what is known as a rights issue. Its early actions were swift in response to the crisis, with April and May’s operating costs cut to €200 million from €400 million per week.”

There is also a feeling that, especially in the case of national carriers such as IAG’s British Airways, the current situation has allowed them to make the kind of drastic restructuring that has been needed and will see them in a stronger position if and when civil aviation returns to 2019 levels in future years. BA plans to cut 12,000 jobs. There is still a threat of major strike action but it looks like the airline will achieve its goal, saying that 6000 staff have volunteered for redundancy. Such swinging cuts at any other time would surely have seen BA crippled by strike action. Now, there are grumblings of discontent but also a level of realisation BA has little choice if it is to survive.

Share prices are low enough now that when travel does return and planes refill with passengers, many airlines will have a much lower cost base. For years unions have hampered the ability of traditional airlines to compete with the new breed of budget competitors, especially in short haul markets. They may now be in a better position to take up the fight again when things start to return to normal.

But much uncertainty remains and buying airline stocks now, even at knock-down prices, certainly represents a risk. The Share Centre’s Joe Heaney says:

“There’s still a lot of uncertainty as to when full capacity will return. Most airlines seem to think it will take until 2023 to return to 2019 demand. The rebound in shares has largely been based on the prospects for summer travel and there has been a failure to consider the post-summer period when demand is likely to fall off. We would not be comfortable recommending any stock until we have a clearer picture about future earnings.”

A big question mark for potential investors in bargain airline stocks should be the conditions under which the civil aviation market returns. Flights are only meaningfully profitable when planes are almost full. That means airlines will have almost certainly have to offer tickets cheap enough to overcome passenger doubts to get their number back up. The other option will be to cut back on routes, retaining those for which there is most demand. If the recession that is following lockdown is severe, and it might be, even that may not be enough.

Business travel may never recover to pre-coronavirus levels with many companies reaching the conclusion they can get by with video-conferencing for many of the meetings that would once have involved international or inter-city air travel.

The reality is some airlines may not supply and there may also be further consolidation in the industry through mergers and acquisitions. But for investors with a horizon of at least 5 years, current prices or buying on another dip for airline stocks if there is one, and there very well may be, could represent a high risk-high reward bet. The risks are high and could be rising. But the rewards on offer when the airline stocks that survive to recover do, could also be rich.

FDI key to India’s aspiration to be a...

Is The Hut Group set to become the...

Beijing reportedly pushing for Alipay break up in...

Morrisons takeover set to be decided in auction

The private equity sector and cash-rich firms that comprise it split opinion. Some view... END_OF_DOCUMENT_TOKEN_TO_BE_REPLACED

At the end of August, The Times newspaper reported on two real estate funds,... END_OF_DOCUMENT_TOKEN_TO_BE_REPLACED

The Covid-19 pandemic has famously seen many sectors of the economy fall into two... END_OF_DOCUMENT_TOKEN_TO_BE_REPLACED

Britain, like most of the world, has traditionally been a country of milk and... END_OF_DOCUMENT_TOKEN_TO_BE_REPLACED