Thursday January 2nd was the first stock market trading day of 2020. It turned out to be a positive start to the year with the FTSE 100 gaining 61 points. That positive trend continued with further gains over Friday January 3rd. 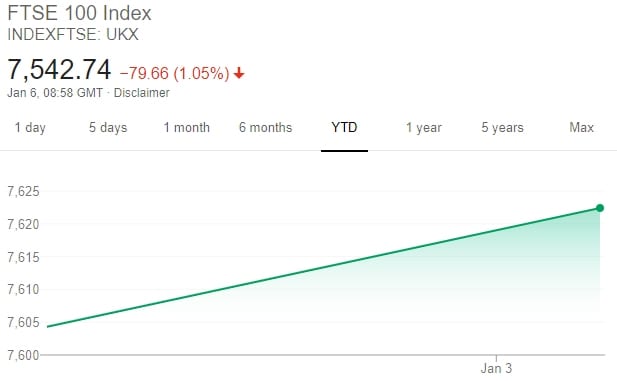 This morning has seen something of a correction with the benchmark index down just over 1% in early trading. However, if historical patterns are able to offer any clues to prospects of the year ahead on the London Stock Exchange, investors should remain encouraged. The market’s gains over the first trading day of the new year could well be a good omen!

Online stock broker and investment platform The Share Centre has studied the patterns and behaviour of the FTSE 100 over the past two decades. And one interesting titbit amongst the data is that in 17 years out of twenty, or 85% of the time, the index has finished the year the same way as the outcome of the first day of trading. That mean’s Thursday’s gains should mean there is a much better than average chance that the FTSE 100 will finish 2020 with a gain.

Last year the positive omen proved accurate. The index gained six points to a level of 6728 and completed the year at 7542 – a gain of around 13%. With the January 2nd game around ten times better than its equivalent a year earlier, let’s hope that’s also reflected in a better annual return for the FTSE 100!

But why would there be any link between how the FTSE 100 performs over the first day of trading and the rest of the year? There isn’t really any obvious connection other than investor sentiment. And with the research looking at only 20 years, there is probably a degree of luck on how often the first day result has correlated with the return from the rest of the year.

And investors certainly wouldn’t be wise to base their investment strategy for the year on the ‘omen’. It doesn’t prove accurate absolutely every time. In 2002 and again in 2011, the FTSE 100 recorded opening day gains but losses for the year. And in 2016 the index fell to a loss over its first trading day but was up over the whole twelve months of the year. The other six times over the past 20 years the first day of the year’s trading that have resulted in a drop for the index, the rest of the year has gone on to follow.

While investors should not take the fun ‘first day’ omen too seriously, despite an impressive track record of accuracy over 20 years, a majority of analysts do seem to think a good year could be in store for the FTSE 100. Internationally, equity markets are positive, with positive developments in U.S.-China trade talks buoying optimism.

And London-listed companies have been weighed down since the 2016 Brexit referendum result. Now the December general election has removed some of the uncertainty around Brexit, investors will hope that UK companies do some catching up on international peers over the coming months. However, we may have to wait until there is also more clarity on future trade agreements between the UK and EU before real confidence is restored. But many analysts believe there is a very strong chance the FTSE 100 will break the 8000-point barrier at some point this year.

Days Of Fraud Allegations End With Resignation Of...