Are Stock Markets In Melt Up?

The global economy is tanking

What Is A Stock Market Melt Up?

A stock market melt up is a phenomenon that often forms the final stage of a long bull market. The melt up itself is a strong, unexpected surge in the value of the stock market catalysed by a rush of investors worried about missing out on gains, which builds like an avalanche. Except the momentum gathered is upwards, rather than downwards, driving share prices and indices to new, rapid highs.

The defining quality of a stock market melt up is that valuations are pushed higher by herd-like demand based on FOMO, rather than any fundamental improvement in the wider economy or the financial results of the companies whose stock prices are rising. The result is that stock market melt ups are often followed by a crash, or melt down.

Once the melt up’s momentum runs out of steam investors pile out as quickly as they piled in, nervous that valuations are not well underpinned by economic and company fundamentals. That rush for the exit tends to send the stock market tumbling, marking the end of the bull cycle that culminated with the melt up.

Any asset class, not just a stock market, can have a melt up. A melt up can also be referred to as a bubble but while the two have many similar qualities they are not exactly the same then. A melt up is the final stage of an extended bull market. First valuations rise more smoothly over a period of time before suddenly rapidly gaining momentum during the melt up.

The melt up could last longer than I anticipate as a result of the huge amounts of cheap money flowing into the economy thanks to unprecedented economic stimulus from central banks. But that would only eventually lead to a harsher melt down, so my hope is also that the correction appears sooner rather than later. 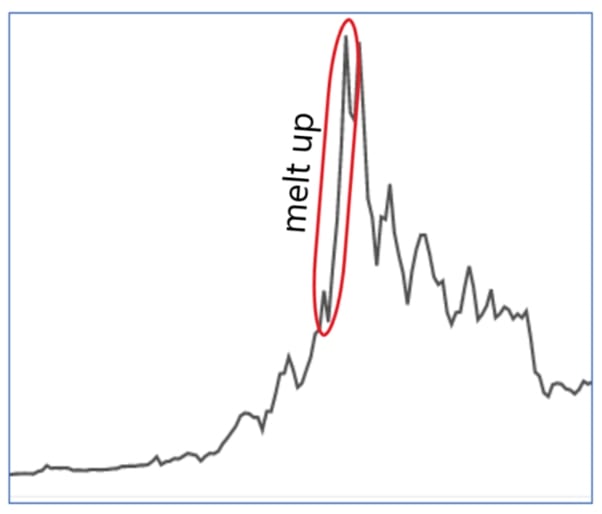 A bubble can form in an asset or asset class out of nowhere. The valuation of an asset or asset class may have been bumping along at a consistent level for a period of time, or even moving slightly down before investors suddenly start to buy in a frenzy, pushing prices suddenly upwards. The most common example given of a bubble is the 17th century Dutch tulip bubble, or ‘Tulip Mania’.

It has to be noted that if what we are currently experiencing in international stock markets, and particularly on Wall Street, is indeed a melt-up, it is not a typical example of one. The big difference is that the rapid rise in the stock market since March has come after a sharp drop. 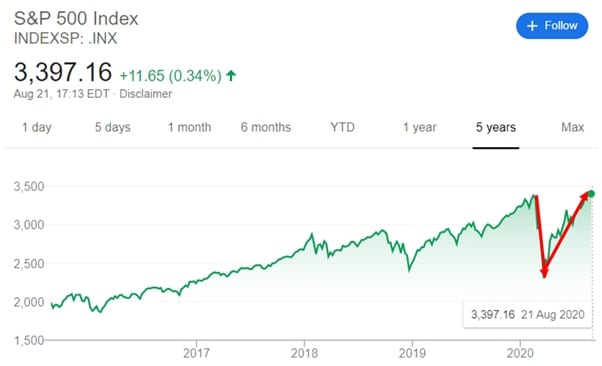 That drop was caused by the market fears as the Covid-19 pandemic hit. While it could be argued that the initial sell-off was overdone and as such a bounce back should have been expected, the strength of the bounce back has been exceptional. The major Wall Street indices are either back at new record highs, the Nasdaq and S&P 500, or only a fraction of the highs set before the selloff.

It might sound like what’s happening now then more fits the definition of a stock market ‘bubble’, than a melt up, given that gains over the past few months have followed roughly equal rapid losses as markets crashed in March. But the exceptional nature of current circumstances mean I think we can still call what is happening now a probably melt up.

Before markets panicked at the coronavirus pandemic and crashed in early March, many analysts were arguing that the stock market looked like it was in melt up territory at the end of the more than decade-long bull market that followed the last markets crash in 2008. That was brought to a sharp end by the onset of the global pandemic that has rocked economies around the world.

If we take out the flash crash in March as an exceptional one-off reaction to a global catastrophe, it looks like markets have approached the recovery as if Covid-19 never happened. I’m calling the current situation a probably melt up on the basis that the coronavirus crash was not a normal crash catalysed by structural problems in the underlying economy of financial markets. It was a reaction to a particular huge event.

But the way the stock market has staged its v-shaped recovery, looks like a typical melt up. But if you prefer to call it a bubble, that’s fine. Let’s not split hairs. What is important is that while the global economy was in reasonable shape before the Covid-19 pandemic, some argue the U.S. economy was strong, it wasn’t enough to justify the strong gains in the stock market last year and over the first couple of months this year.

Company valuations increasing quickly without their revenues or profits moving at anywhere near the same pace, sounds like a melt up. Several months on and the global and U.S. economies are in terrible shape.

Economic data is still coming in but it is certain the past few months will represent the single greatest slump in national and global GDP in the post-WWII era. Countries and companies have borrowed huge sums of money to survive, rocketing global debt levels to spectacular new highs. A not insignificant number of companies have already failed, many more will follow and unemployment levels will spike internationally over coming months.

Even if a vaccine is available late this year or early next year, the fall-out of the pandemic on economic activity will rumble on for at least several more months. And against that backdrop stock markets are soaring.

Even if the giant tech companies driving gains have been among the least impacted by the lockdowns that have accompanied the pandemic, they won’t be immune to their users and advertisers losing their jobs or business over coming months. And most of the other sectors that make up the global economy are in trouble.

It’s hard to see how plunging fundamentals go hand-in-hand with sky rocketing stock market valuations without what we’re seeing being a melt up or bubble that will inevitably be followed by a meld down.

Why Do I Think Valuations Look Melt Up-ey?

The best case scenario for how we come out of the Covid-19 pandemic economically is a V-shaped recovery. That means now the worst of lockdown is over, at least hopefully, employment rates and consumer and company spending will bounce back. That would see, believe optimistic analysts, 2021 company earnings bounce back to 2019 levels, which were strong.

There are two problems with that as an argument supporting current stock market valuations. The first is that a V-shaped recovery looks unlikely with second waves of Covid-19 stronger than the first sweeping many parts of the world. Even where infection and death rates are significantly down on first wave peaks, like in the UK, there are still enough clusters sprouting up to indicate we won’t be back to normal life this year.

Secondly, stock market valuations are based on future earnings. On that basis, they already looked stretch back at the beginning of the year. Now we’re having a year where they will be well down. By the biggest average margin in modern history. But valuations are higher.

As Brad McMillan writes for Forbes,

Right now, the S&P 500 is at 3397.16. That is over 27% higher. If prices keep going up until the end of the year, or even another month or two, that will be much more and leaves a lot of room for a severe plunge if market sentiment changes.

Could The Post-Coronavirus Stock Market Of 2020 Mirror The Post Spanish-Flu Market of The 1920s?

In 1918, the Spanish Flu infected an estimated 500 million globally, killing one in 10 – a staggering 50 million. By comparison, the Covid-19 toll looks like it will be comparatively mild.

Once the worst of the Spanish Flu pandemic was over, the 1920s was a hugely prosperous decade for stock market investors. The boom was fuelled by technological advancements, the car being a prime example, boosting productivity.

Could the 2020s see something similar play out? Yardeni Research is a sell-side consulting firm and recently published a blog post speculating that could turn out to be the case. Ed Yardeni, the company’s chief investment strategist wrote:

“Today’s doomsters could be confounded by biotechnological innovations that deliver not only a vaccine for COVID-19 but for all coronaviruses. Scientists are investigating an array of approaches to fight COVID-19. Hopefully, beyond finding a cure or a vaccine, one of the beneficial outcomes of all this research will be that scientists learn many more ways to combat illnesses in general and viruses in particular.”

Advancements in robotics, AI, nanotechnology, blockchain, electric vehicles, quantum computing, etc could lead to a historic transformation, similar to that catalysed by the advances in transportation, manufacturing, electricity and plumbing that followed the Spanish Flu 100 years ago.

Yadeni predicts the current bull market will continue into late 2021. It should be noted that the 1920s stock market bull run ended with one of the biggest market crashes of all time in 1929 – The Great Crash, or Black Tuesday.

Personally, I think that sounds far-fetched. Yes, we are in the midst of a new technological revolution which could well accelerate thanks to leaps forward in especially AI and biotechnology. If there is significant progress towards quantum computing that could be the real game changer.

But I don’t think we can ignore the fact stock market valuations were already looking very stretched before March, especially in the tech sector. They’re looking a lot more stretched now they’ve increased, especially in the tech sector, and the underlying economy has fallen off a cliff. There might be a quick economic recovery but with a second wave of Covid-19 now rolling out around the world the hoped for ‘V-shaped’ recovery looks unlikely.

If I had to guess, my bet is we’re in a melt-up or bubble right now and it won’t last until the end of the year. I personally think it is unlikely to not go pear-shaped before we’re deep into autumn. But, if I knew what will actually happen, I’d be far richer than I am. But I would urge caution. Whatever we look at it, is there a strong argument in favour of current stock market valuations not having become detached from the reality of company earnings, profits and the underlying economy? I don’t think there is. I think we’re in melt up.