Are the UK’s major listed supermarkets an undervalued investment opportunity?

Last month the board of Wm Morrison, the UK’s fourth largest supermarket chain by market share after Tesco, Sainsbury’s and Asda, rejected a 230p-a-share offer worth a total of £5.5 billion. The bid, made by American private equity giants Clayton Dubilier & Rice (CD&R), offered a 29% premium on Morrison’s closing share price the day before it was made.

Despite that premium sounding reasonable at first glance, the Morrison’s board did not appear to spend much time considering its merits before kicking it in to touch. Markets clearly agreed the opening bid by the buyout house was a lowball offer. Morrison’s share price immediately jumped by 34.5% to 240.5p-a-share, well above the 230p offer on the table, suggesting the belief either CD&R or a rival bidder would up their offer.

Over the roughly three weeks since Morrison’s rejected the CD&R bid that valued it at £8.7 billion, including £1.8 billion of debt and other long term liabilities, its share price has held and even edged up from the gains achieved after news of the offer broke. The market has acknowledged the supermarket operator, whose freehold property portfolio and other assets were worth more than its stock market valuation, was previously undervalued.

The UK’s leading supermarkets looking cheap at their recent valuations has been on the radar of private equity, especially from the USA, for some time now. The takeover of Asda, the UK’s third-largest supermarket chain, by the consortium of British petrol station billionaires Zuber and Mohsin Issa and their American private equity partners TDR Capital, is expected to be completed within days.

That deal saw U.S. retail giants Walmart agree to sell Asda for £8.6 billion for just £0.1 billion more than what it paid for the supermarket group in 1999. The buyers have are also, as is often the case with private equity acquisitions, heavily leveraging the purchase. It will also be far from a surprise if one of their first steps as new owners is the sale and leaseback of parts of the supermarket’s property portfolio.

Sainsbury’s may well be next to attract a takeover bid. In April news broke Czech billionaire Daniel Kretinsky had raised his stake in the company from just over 3% to 9.99% through his Vesa Equity Investment group. That looks very much like the kind of stock buying pattern that might be expected to precede a full-blown acquisition approach.

Even Tesco, by far the UK’s biggest supermarket by market share, 27% compared to the 15.3% held by nearest rival Sainsbury’s, could be vulnerable to aggressive takeover bids. Private equity will certainly have noted with interest how much cash Tesco returns to shareholders in the form of dividends and share buybacks. Cash that would be held onto by private owners.

The fact shareholders are currently disappointed by forward guidance operating profits this year will only return to their pre-Covid 2019/20 levels despite revenues boosted by lockdown, could leave Tesco vulnerable to bids. 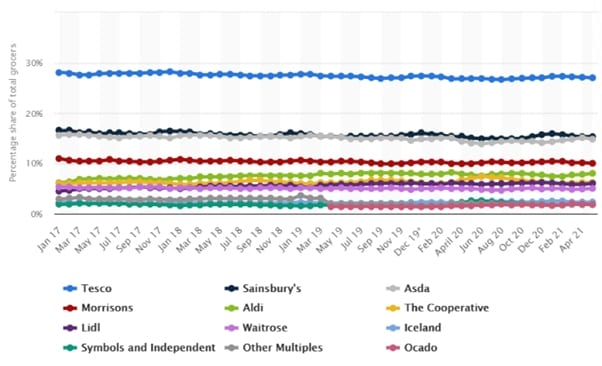 Why have the UK’s largest supermarkets been unloved by London investors for so long?

Before the CD&R bid, the Morrisons share price was roughly at the same level it was 20 years earlier. Tesco’s valuation is also approximately the same as it was 21 years ago. Sainsbury’s share price hasn’t been lower than current levels since Margaret Thatcher was prime minister in the 1980s.

The main publicly listed UK supermarket chains have failed to provide investors with any growth for 2 to 3 decades now. That’s clearly not an encouraging record and has combined with perceived threats to the sector such as budget German rivals Lidl and Aldi, online groceries shopping meaning we’ll soon all receive our goods from non-branded ‘dark warehouses’, over-expansion creating too much floor space, consumer preferences moving back towards smaller artisanal producers and retailers and wafer-thin margins meaning its not a business anyone can make money in.

Overseas private equity, however, clearly disagrees with the pessimism of London investors. They see plenty of value left in the sector.

Against a backdrop of all the negative for supermarkets, what does some of the smartest money in the world see in the UK’s groceries sector? There are a number of positives driving the interest.

The rise of e-commerce dominance is likely exaggerated. Yes, we did a lot more shopping online during the pandemic and that isn’t a trend that is going away. But as lockdown restrictions start to be dismantled there are already indications we still like to shop in physical stores and will soon be back in malls and shopping centres. And supermarkets.

Inflation also looks to be on the rise and many expect the remainder of the 2020s to prove an inflationary decade. Supermarkets are in a much better position to keep cash flow strong and profits consistent even if the prices of the average shopping basket is rising. Most groceries shopping is not discretionary or cyclical and would be expected to remain stable.

Automation is also likely to see salary costs drop for supermarkets over the next decade as AI and robotics reduce the number of staff needed in-store as well as in warehouses.

But crucially, the valuations of UK supermarkets are at rock bottom. Relative to strong cash flow, the market value of assets like real estate, and good yields, Morrison’s, Sainsbury’s and Tesco all look very cheap.

Stock market investors have ignored those positives for years, something alluded to by Morrisons when it kicked out the CD&R bid as “significantly” undervaluing its long term prospects.

Does all this mean investors should be snapping up undervalued British supermarket shares to take advantage of either a return to growth or future takeover bids? Let’s quickly run through the four main London-listed supermarket stocks to assess their current valuation and prospects:

The Tesco share price has lost almost a quarter of its value since February when investors were disappointed by conservative forward guidance the fact increased revenues over pandemic lockdown periods didn’t translate into increased profits. 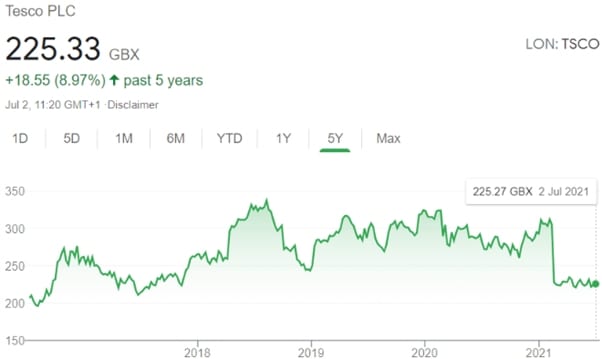 But Tesco is the largest supermarket chain in the UK by some distance and thanks to its Clubcard loyalty scheme has built up a far richer customer behaviour database than its competitors, helping it make informed decisions.

But the Tesco share price currently trades at only a very narrow premium on rivals Sainsbury’s and Morrisons. If both those companies are undervalued by the market, as strong private equity interests indicates they are, then Tesco is too. And given its larger scale and strong market position, there is an argument even more so.

Sainsbury’s is an attractive private equity investment for roughly the same reason as Morrisons. The UK’s second-largest supermarket operator has spent hundreds of millions paying down debt each year, despite having the cash flow to service much higher debts than it has.

Sainsbury’s also has a valuable real estate portfolio that could release hundreds of millions of pounds in cash if sold and leased back. While it only owns 60% of its stores compared to Morrisons’s 85%, the market value of Sainsbury’s real estate assets is worth more – £10.1 billion to the £6 billion-£8 billion of Morrisons’s.

Sainsbury’s also has a convenience stores business that is performing strongly, Argos is doing well and so is the company’s online business, which is a weakness of Morrisons, which has a partnership with Amazon instead of fulfilling their own deliveries.

The Morrisons’ share price is currently at 239p and market observers estimate any new bid for the company would have to reach between 250p and 300p-a-share to tempt the board. There are likely to be new bids which would mean unless the board can achieve the share price gains that would satisfy investors enough to reject higher bids over the next year or so, there is still upside at the current valuation.

And if a sale doesn’t happen it can be presumed it will be because the current board manage to unlock that value themselves. That would also mean an upside from the current share price.

Marks & Spencer, which seems to have been in perennial ‘turnaround’ mode for over 20 years now, is a more complicated case than the other three supermarket chains covered. For a start, M&S’s clothing business is far more important to the overall business than is the case for any of Tesco, Sainsbury’s and Morrisons. And it has been a drag for years.

M&S’s food business is much stronger but isn’t a traditional supermarket format. M&S food stores do sell supermarket staples but typically have a much narrower selection of products and the emphasis is very much on ready meals and packaged lunches.

M&S’s weak performance over the past two decades is best summed up by the fact its record pre-tax profit figure of £1.2 billion was achieved in 1998. Last years £67.2 million figure can be put down to exceptional circumstances but the £523 million profit for 2019 was almost half of that achieved over 20 years earlier.

There is some optimism around the prospects of the current leadership team of chairman Archie Norman and chief executive Steve Rowe. They are simplifying the M&S product range, especially in clothing and taking the company away from its pursuit of fast fashion popularity and back to quality, affordable ‘everyday wear’.

A new unit has been established to run and develop M&S’s online offering in a way it hopes will see it again compete with historical clothing rival Next. In fact, it looks very much like the new online business has been modelled on that of Next.

The company’s culture is also reportedly improving and if the clothing business is finally made a success of it could provide even better margins than the strong food business. M&S also has a valuable real estate portfolio and analysts believe regeneration of some of its sites like Marble Arch will fund improvements to stores across the chain. That would allow improving sales to flow straight to the bottom line.

Of the four, an investment in M&S shares would be the riskiest move but one with potentially the most upside because of the extent of the company’s struggles over many years leaving the most room for improvement.

Sporttrade acquires license to operate in Colorado (US)

2020 was a disaster for income investors as the onset of the coronavirus crisis... END_OF_DOCUMENT_TOKEN_TO_BE_REPLACED

With gains of 21% since the beginning of the year, commodities has been the... END_OF_DOCUMENT_TOKEN_TO_BE_REPLACED

The London-listed mining company Rio Tinto has just announced it will pay out record... END_OF_DOCUMENT_TOKEN_TO_BE_REPLACED

Since he founded it as an online bookseller from the garage of his rented... END_OF_DOCUMENT_TOKEN_TO_BE_REPLACED

Last month the board of Wm Morrison, the UK’s fourth largest supermarket chain by... END_OF_DOCUMENT_TOKEN_TO_BE_REPLACED