With hype and media coverage around the car and wider automobile industry firmly centred on electrification and EVs (electric vehicles) valuations for pure-play companies in the sector have reached eye-watering levels. Those of traditional carmakers are, by contrast, depressed.

But with the large, traditional automakers investing billions to transition towards an EV future, it would seem foolish to write these companies off as yesterday’s news. They have the internal resources (even if the level of investment needed to transition to EVs is a significant burden), supply chain and manufacturing experience and sales networks already in place, which most EV start-ups don’t.

Every big traditional carmaker may not transition well to an EV future. But many of the highly valued start-ups investors are throwing billions at won’t either. And already established, successful and experienced car manufacturers have several obvious advantages on the young upstarts.

All of which suggests traditional car companies may be very undervalued at this particular junction of history and represent an interesting investment opportunity.

Tesla sits pretty as the most valuable carmaker in the world with a market capitalisation of over $700 billion. EV start-ups like UK-based electric van maker Arrival, Canoo, Lordstown Motors, Fisker, Nikola and several more are going public via SPACs at valuations in the billions, often double-figure billions, despite never having actually manufactured a sellable vehicle.

Some of the EV companies to achieve sky-high valuations, notably Fisker ($2.9 billion) and Canoo ($2.5 billion), won’t even have a working prototype for around another year.

Even Tesla is only, recently, profitable because it is able to sell billions worth of industry emissions allowance tokens to other car companies still manufacturing petrol and diesel engine vehicles. And bitcoin. Strip those revenue streams out and it would still be loss-making.

Despite that, and vehicle sales still a fraction of the numbers generated by major traditional automakers, the Tesla share price has grown by over 1400 over the past two years. It trades at an almost unheard of p/e ratio of 371.89.

Toyota, the second most valuable carmaker in the world, is worth $256.2 billion – about three times less than Tesla. It trades at a p/e ratio of 9.4. That’s almost 40 times lower than Tesla’s valuation multiple. 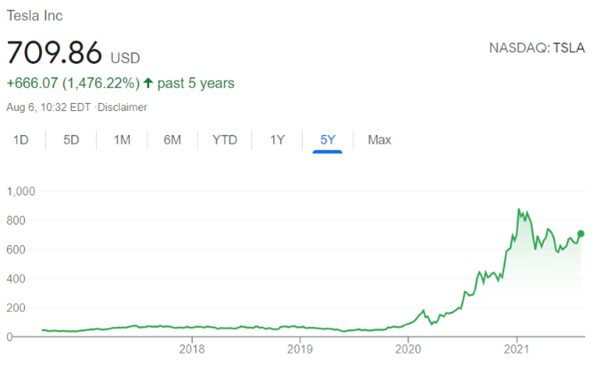 The argument why Tesla is valued so highly despite its comparatively modest sales figures, EVs still only account for around 4% of vehicles on the roads in the USA and UK, is that it is the market leader (16% of EV sales) in the technology that represents the future of the automobile industry.

That the future of the automotive industry is electric is no longer in much doubt. The sale of new petrol and diesel-engine cars will stop in the UK from 2030 and most of the rest of the economically developed world has now set itself similar targets.

Of course, the traditional manufacturers of petrol and diesel-engine cars, from Vauxhall to Toyota, Ford, GM, Hyundai Volkswagen, BMW and the rest, are not simply planning to shut up shop at the end of the decade.

“Thanks, we had a good run, now over to you Tesla and assorted EV start-ups still to commercially manufacture a single vehicle”,

is not an announcement anyone expects to hear.

They are, of course, investing heavily in developing their own EV models to replace petrol and diesel lines. Over the 24 months to the end of 2022, consultants McKinsey estimate the launch of 450 new EV models – mostly designed and manufactured by traditional car companies.

Markets are showing early signs of adjusting to the realisation Tesla and other pure-play EV companies may have been over-egged and the future potential that traditional car companies still have undervalued. Volkswagen’s share price is up a little over 40% so far this year, while Tesla’s is now down 4.17%. GM is up 36%, Toyota 24% and BMW 14.4%.

Which traditional car companies are best positioned for the EV transition?

The general consensus among analysts is that Volkswagen is best positioned among the traditional car companies to challenge Tesla for market supremacy during the EV transition. Quoted in The Telegraph newspaper, Christian Armbruester of the Blu Family Office wealth management firm, says:

“The stock has underperformed Tesla by some 1,000 percentage points in the past two years. However, at long last the share price is on the rise. It already produces nearly as many electric cars as Tesla and it is now getting into batteries. By all measures the people’s car company is still massively undervalued versus Tesla.”

Tesla’s 2021 market valuation would only be justified by the company heavily dominating future EV sales. But there is a growing suspicion it may, in fact, be VW that is better positioned to do so. In that context, the current market capitalisations of the two companies seem almost bizarrely juxtaposed.

At the beginning of this year, Tesla was worth ten times more than Volkswagen. But VW sold 20 times more cars than Tesla for seven times the revenue and five times the profit. And that profit was made selling cars, not from trading industry emissions allowances and bitcoin.

VW recently predicted it would halve the cost of the batteries it uses in its EVs by 2023, which would make them cheaper than Tesla’s. That would be a hugely significant development because it would mean the company’s profits on sales would offer comparable margins to those generated by the sale of traditional vehicles.

Tesla’s battery technology is one of the competitive advantages hopes have been pinned on but traditional car companies have made major investments in their own battery technology and are catching up. VW invested £217 million in American battery company QuantumScape and its stock market valuation has risen 400% over the past 12 months. As well as proving a good investment financially, VW’s stake should give it privileged access to QuantumScape’s batter IP.

Toyota is another traditional car company that has invested in becoming a leader in solid-state battery technology. The Japanese company is confident solid-state batteries will prove to be lighter and safer than alternatives like lithium-ion.

Solid-state battery technology is believed to deliver higher energy densities (2.5x), by enabling lithium metal anodes. They may avoid the use of dangerous or toxic materials found in commercial batteries, such as organic electrolytes and carry no risk of explosion.

Volkswagen, which also owns the Audi, Porsche and Bentley luxury brands, has already been covered and looks like a strong bet to genuinely challenge Tesla for supremacy during the EV transition. If it comes even close to doing so the stock should have some major upside on its current share price over the coming months and years.

The two American giants Ford and General Motors are also worth investors keeping a close eye on. The Ford share price is already up almost 62% for the year-to-date and has been one of the traditional car makers to benefit most from rising demand for EVs. Its sales of electric and hybrid vehicles increased by 117% in June when it sold almost 13,000 of its Mustang Mach-E SUV.

Pick-up trucks are hugely important to Ford’s U.S. revenues and it is due to launch the EV version of its hugely popular F-150 pickup next year.

GM’s 36% gains this year haven’t been quite as impressive as Ford’s but the USA’s biggest car manufacturer has also invested in electrification and is reaping the rewards with record deliveries of the Chevrolet Bolt EV over the second quarter and the first half of the year.

Japan’s Toyota and Honda are the final two suggestions. The former recently announced it is to release 15 new battery EVs by 2025 that will include seven new battery EV models of its “beyond Zero” series. The company also offers hybrid models like Corolla Hybrid and Camry Hybrid.

Honda Motor is also investing heavily in its EV range and recently announced that it is targeting 100% EV sales in North America by 2040. It is also planning to make its own EV architecture after its two vehicles made in partnership with General Motors, namely Honda Prologue and an all-electric Acura SUV, go on sale in North America by 2024.