Are UK Equities Set to Benefit from Sterling Tumble and Unexpected Inflation Drop?

Pound sterling today fell to a 10-month low, shedding almost a full percentage point against the dollar after tumbling 0.9%. Brits investing online may now be wondering if the FTSE 100 will receive the same boost as was the result of a tumbling pound in the wake of the Brexit referendum vote.

The trigger for GBP weakness was a Core Consumer Price Index reading showing inflation, which doesn’t include food and fuel prices, dropped to 1.9% in June. It is 15 months since core inflation was last at such lows and even higher oil prices which have increased the cost of energy did not move the needle on general inflation, which remained stable at 2.4%. While the Bank of England is still expected (with a likelihood of 77%) to push ahead with its intention to raise the core interest rate by 0.25% at its upcoming August 2nd meeting.

The recent Brexit uncertainty that has resulted in Theresa May struggling to keep her government together has also contributed significantly to the pound dropping to $1.3010. The last time the UK’s currency was so low against the dollar was September 2017. That was followed by the FTSE 100 climbing to 778.64 by mid-January this year – a fraction off the 778.70 high of May 18th. With the benchmark index having slid since then could the weaker pound now send UK equities to new heights over the shallow summer trading period? 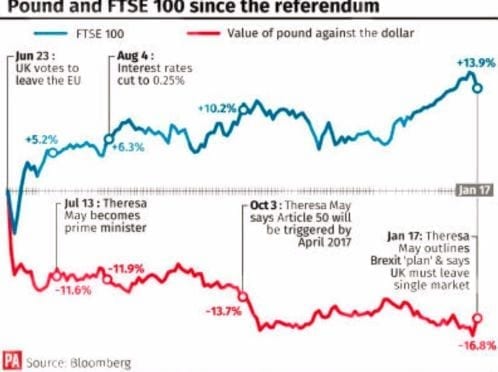 As the chart above demonstrates, since the Brexit referendum the fortunes of the FTSE 100 has shown close inverse correlation to the strength of the pound. This is a result of the fact that the index, composed of the London Stock Exchange’s 100 largest companies by market capitalisation, sees a large majority of revenues generated abroad in other currencies such as the dollar and euro. When converted back into pound sterling on companies’ accounts, this boosts reported revenue figures. A weaker pound also makes UK exports more competitive when paid for in other currencies.

Should the BoE see faith in the economy’s ability to absorb higher interest rates shaken by today’s figures and delay a hike, the pound would be expected to lose further ground on major peers, all else being equal. Continued failure to make meaningful Brexit-process progress would also be damaging. However, for those investing online in big London-listed companies or FTSE 100 trackers, the silver lining to summer holidays abroad being more expensive this year could be a boost to investment portfolios.