Are we at or near the bottom of a correction or caught in a bear market with months of pain remaining?

It’s been a long time since investors have had the experience of a serious bear market. While the pandemic sell-off of February and March 2020 was a technical bear market, defined as a market falling at least 20% from its most recent high, it lasted just 33 days. Before that, the last bear market unfolded in 2009 in the wake of the international financial crisis.

Bear markets are a fact of life for stock market investors. There have been a total of 14 since 1945, lasting an average of 9.5 months. And despite the fact that Wall Street’s blue chip stocks had lost over $7 trillion from their late 2021 highs by last weekend, we haven’t yet officially entered technical bear market territory during the current correction.

Ahead of the week just past, it looked like we were on the very of a bear market. On May 20th, share prices had a very brief intraday dip into technical bear territory. It lasted just minutes but was enough to see investors head into last weekend with plenty of nerves about the week ahead.

Seven days later, however, the situation suddenly looks a lot rosier. The S&P 500 gained over 6% last week putting some significant distance between itself and bear territory. The Nasdaq was up almost 6.5% for the week and the Dow Jones a little under 6%. The UK’s FTSE 100 benchmark was also up over 2.5% but it is in positive territory for the year.

It has been insulated by having fewer growth companies as constituents and a heavy weighting of energy and commodities companies, which have been among the few sectors to show gains this year. 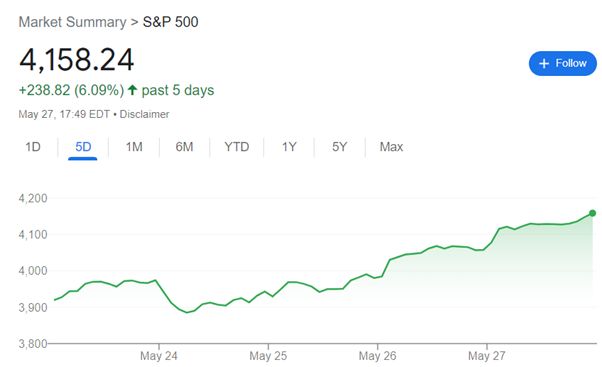 Overall, last week was Wall Street’s best week since November 2020. Some analysts have speculated that the extent of the uplift could mean the market has already reached its bottom and the steep losses of 2022 so far could be over. Others are less confident and are convinced last week’s gains were little more than market volatility and months of pain are likely to remain for investors.

Which is it? Are markets now going to start to consistently set about recovering losses incurred so far this year or did last week’s gains represent a bear trap, a false signal of a reversal of the downtrend, or slightly worse, a dead-cat bounce, a temporary increase in prices preceding a new plunge?

Let’s take a look at the arguments on both sides.

Have we reached or are near to a market bottom?

Many of the biggest tech companies listed on Wall Street have seen their valuations take a heavy hit this year. Meta Platforms, which owns Facebook and Instagram, is down 42% this year. Netflix’s valuation has plunged 67% to return to levels last seen in 2017.

Amazon is down 35% and even Apple, whose valuation hit $3 trillion in January to become the first company to ever do so, has lost 18%. The electric cars company Tesla’s valuation has slid 49% from its peak last November.

Many analysts believe the solid fundamentals of most large tech companies, excluding start-ups that floated last year, often through Spac listings, at valuations in the billions despite little revenue or profit, mean we could be near the bottom of the market now. The ‘froth’ has been taken off the top of valuations but the companies remain hugely profitable and are well positioned to take advantage of new technologies and an increasingly digital economy.

Bulls are even convinced the sell-off this year has gone too far and is an overreaction. Last week David Rubenstein, co-founder of the private equity company The Carlyle Group, told a panel hosted by CNBC at the World Economic Forum in Davos that he felt investors had oversold tech companies with strong foundations. He gave Netflix, which has 221 million paying subscribers as an example, stating:

“It may not be worth what it was worth in the market a few months ago but it’s certainly worth more in my view than what it’s currently trading for.”

“Stocks are already factoring in a mild recession. Unless there’s a hard landing [as the Federal Reserve combats inflation] and just an Armageddon-like recession, I believe these stocks, especially in tech, are factoring in very negative news.”

He expects many of the tech stocks to have been hardest hit this year to show strong gains in the second half of 2022.

Is there more pain to come?

Despite a significant correction this year, the extent of stock market gains between the start of the recovery from the pandemic sell-off in late March 2020 and highs achieved late last year means markets are still a lot higher than they were before the pandemic. That makes it, some analysts believe, risky to call a market bottom at this stage.

Quoted by The Motley Fool website, David Rosenberg of Rosenberg Research recently wrote in an op-ed in MarketWatch that he thinks the S&P 500 could drop much further, to around the 3,300 level. One reason for this is that yields are still too high. Historically, notes Rosenberg, the end of a bear market is usually triggered by an average 1.35 percentage point drop in the 10-year Treasury yield.

Morgan Stanley’s Chief Investment Officer Michael J. Wilson also said last week that he thinks markets will still drop by a significant amount before rising again and that the S&P 500 will fall to closer to 3,400. It closed last week at 4158. Investor sentiment, he believes, will track the perceived likelihood of the USA falling into recession in 2023. That will be largely dictated by how aggressive the Fed believes it has to get with interest rate rises over coming months to control inflation.

Bearish analysts believe the market will not bottom until after expected 0.5% hikes to the base interest rate are confirmed by the Fed in June and July. And until it starts to unwind a balance sheet bloated by years of quantitative easing.

Regardless of what happens over the rest of this year, long term investors probably shouldn’t worry too much and should either keep on investing or restart, even at the risk of near term losses. Recessions typically occur about once a decade but the S&P 500 has only declined over two or more consecutive years four times since 2029.

If you are investing in high quality companies with strong fundamentals, business models and economic moats, buying shares now, whether or not the market has bottomed out, should offer good value in the context of their long term prospects.