Are We On the Brink Of The Next Major International Financial Crisis? The Case For And Against

Last week marked the 10-year anniversary of the collapse of New York-based Lehman Brothers. By far the biggest bankruptcy the world had seen, or has since, proved to be the catalyst for the apocalypse that subsequently tore a gaping hole through international financial markets and institutions.

What become known as the international or global financial crisis was so severe that many economists argue that it was second only to the Great Depression in the history of market crashes.

Last week also saw the international media awash with content and discussion on the topic of whether or not we are on the brink of the next crash. The decade since the spectacular implosion of Lehman Brothers that resulted from its exposure to investment instruments based on subprime mortgage has seen strong global economic growth. That has culminated in equities markets surging to new record heights, property markets largely driving beyond their pre-crisis peaks of 2008 and a golden era for venture capital start-up funding that has driven technology and scientific innovation.

But the cash that has flooded the markets over the last several years to fuel that growth did not appear by magic. It was the result of collective international strategy of mass quantitative easing, or money printing, by major central banks around the world from the Fed, ECB and Bank of England to the Bank of Japan. Coupled by almost a decade of record low interest rates barely above zero meaning money had to be invested for a return, capital markets have thrived. Some economists believe unsustainably so and on a foundation of sand.

There are worries that the current cycle has already entered its final phase. Some argue the recent strong gains in equities, particularly for the huge U.S. tech stocks that have been the engine of recent growth, represents the ‘melt up’ period that directly precedes the bursting of a financial bubble. The fear is that if there is a severe correction, those in charge of monetary policy have no more arrows in their quivers, having exhausted all available weapons for economic stimulus and stabilisation over the past decade.

However, others believe that the severity of the previous crash was the result of a systemic failure that meant financial institutions were overexposed in a way that new regulations are capital controls mean is no longer possible. While there may be a future downwards cycle in financial markets and global economic growth after a long bull run, in keeping with historical patterns, it will simply act as a safety valve, taking steam out of an overheating global economy and recalibrating the foundations for the next growth cycle.

So are the optimists or pessimists right? History will one day tell us but in the meanwhile, which are the main arguments presented by both sides? Are we on the brink of a crash that will prove 2008 was simply a tremor preceding the real quake? Or have we learned some important lessons and put the financial and economic checks and balances in place that will keep the next downward cycle under control and the lid on the sarcophagus that holds the shades of Lehman Bros?

Arguments Why An Upcoming Crisis May Equal Or Surpass 2008
There are arguments that some of the safeguards put in place to prevent a repeat of the 2008 crisis could inadvertently contribute to a new, different crisis. One of these is the ‘Volcker Rule’ which is a major pillar of the Dodd-Frank Wall Street and Consumer Protection Act brought into force by Barack Obama. It prevents banks from speculating in markets in order to ring fence the capital held by retail banking and should mean funds held at banks by retail clients is not at risk. However, it has also reduced liquidity by taking one important category of market makers out of the game.

High government debt across the developed world also means that if a severe downturn does hit, even if initially less severe than in 2008, the world’s high income economies can’t practically afford much in the way of stimulus. Quantitative easing has bloated balance sheets and while many countries, including the U.S. and UK have started to unwind that there is still a long way to go. Cutting interest rates also isn’t much of an option. While they have been raised in the U.S. they are still far below historical norms. In the UK we’re some way behind that and in the Eurozone and Japan not only have interest rates not been raised yet but quantitative easing is still in place. So there is little left in the armoury to help turn around a downward trajectory that, left to its own devices, carries the risk of accelerating.

The stock market is perhaps the battleground upon which the bloodiest fighting between experts ringing the doomsday bells and others of a more optimistic hue. The naysayers believe that there is a serious disconnect between the real fundamental strength of the recovery over the past 10 years and the equities boom. They content that the latter has been artificially fuelled by quantitative easing (QE).

Professor Feldstein, once a chairman of the White House Council of Economic Advisors, is one who believes the next crisis will come as the direct result of a stock market bubble bursting. 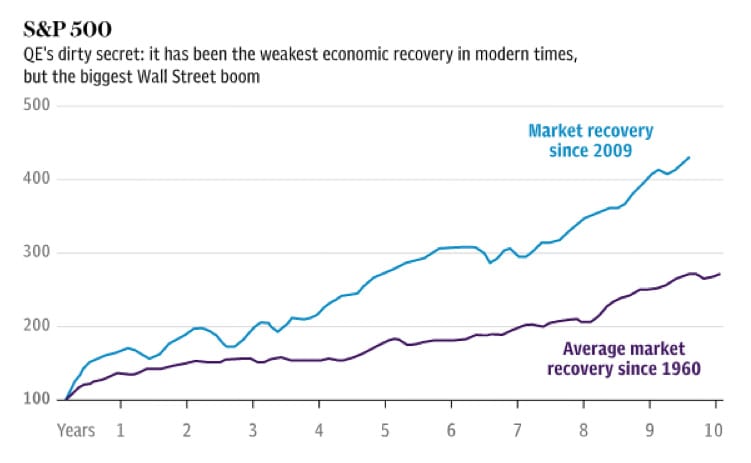 His worry is that when a bear cycle finally grips equities, with the most likely catalyst a jump in 10-year Treasury yields, the correction could wipe $10 trillion off the assets of U.S. consumers. This will contaminate the retail economy through an annual $300 to $400 billion drop in spending, prompting a deep recession. There is no room for fiscal expansion to help mitigate this meaning the road to recovery will be slow and painful.

Professor Feldstein thinks in Europe the situation will be even worse due to the lack of any deflationary buffer having been built up by the ECB and the complexity of the monetary union usually delaying responses. The ECB’s base interest rate is still at zero.

Arguments Why Any Upcoming Downturn Won’t Be as Severe as 2008
The international financial crisis was the result of a reverse of ‘dual leveraging cycles’. The property market has crashed before and will again without taking the rest of the economy with it as happened 10 years ago. The problem then was that as well as the popping of a debt-financed housing bubble, there was also a huge market for financial securities based on the collateralisation of mortgages and credit default swaps that was also highly leveraged. The combined weight of these two cycles reversing, but particularly the latter, is what brought the house crashing down around our ears.

It is not theoretically impossible for that to happen again. Measures to put stricter affordability criteria on mortgages or restrictions on financial markets for disclosures around securitised debt and really independent rating agencies and regulatory control over OTC derivatives markets have not, many believe, gone far enough to safeguard against that. Nonetheless, the extent of the damage caused by the 2008 collapse makes exactly the same kind of crisis happening in the near future unlikely.

Economists argue that if the worst came to worst there are still options for the Fed. Professor Blanchard of the Peterson Institute has suggested that mirroring the Bank of Japan a future QE strategy could be for the Fed to by equities as well as bonds. Or, more extreme, print ‘helicopter money’ to fund the fiscal deficit directly. The term means giving individuals money directly rather than funnelling it into the economy via asset markets. This, however, would be a last resort and in the EU against the rules established by EU treaty law and Stability Pact.

We looked at the bear side to the stock market argument in the previous section. The bulls argue that naysayers who think the stock market is currently expensive, particularly the U.S. stock market, based on traditional measures such as P/E ratios. However, some argue against that. Jeremy Siegel, a professor and author of investment classic Stocks for the Long Run says that over more than a century, the median price-to-earnings or PE ratio of the U.S. stock markets is 17. Based on the last 12 months of earnings, Siegel points out that ratio is still in the low 20s today and so, to his view ‘not that high’. If based on this year’s earnings forecasts that ratio drops to 18 and just 16, below historical averages, on 2019’s forecasts. He bases his calculations on ‘operating earnings’ rather than the more ‘liberal’ reported earnings which he believes give the rosiest picture possible and don’t count certain expenses such as severance and litigation costs.

He also points out that be believes the argument that demand switching from equities to Treasuries, and a capital outflow from the stock market, could provoke a crash is flawed. He calculates the ‘risk premium’ on stocks compared to bonds is currently at 4.5% compared to an historical average of 3.5%, concluding:

He also thinks the huge fall in the costs of investing mean that it we should expect the future equilibrium P/E ratio to be higher than in the past moving forward.

Conclusion
As is usually the case in these matters, the conclusion to the question of whether we are on the brink of a new financial crisis that could be worse than the last has to be that there isn’t one. Yes, there are risks to the system and the way of these things tends to be the extent of a risk only becomes clear when it has spilled over into a severe problem.

However, there is also a very reasonable chance the next 10 years won’t be blighted by a financial maelstrom. Global growth is strong with emerging markets and technology driving it. From an investor’s point of view, the best advice is the same as it always is – diversify and make sure you keep a cash buffer so you can ride out any storm that comes and even take advantage of it to buy on the cheap.

The economy and financial system has always moved in cycles and probably always will. These cycles though do evolve through time. The past offers lessons but does not set in stone what the future has to be. Don’t be naïve, don’t put all your eggs in one basket, build yourself a buffer but also don’t lose opportunities through fear. Carry an umbrella in case it starts to rain but don’t stay at home in case it starts to rain.