There seems to be confusion around if corporations are too good or not good enough. Are public companies natural delinquents that need investors to provide a moral compass, as the ESG movement hints at? Or are they lefty institutions of wokeism harming shareholder interests in the pursuit of misguided ideals and politics?

Do companies hurt the long term interests of shareholders by not being sustainable enough? Or by pandering to woke political correctness? Both criticisms seem to be made with increasing frequency but which camp is right? Or do both arguments have merit as applied to different companies?

We’ve been hearing for years how investors have to put pressure on company boards to better meet ESG standards. Only then will energy companies take coal and other fossil fuels out of their mix sooner and suitably invest in renewables capacity. Shareholder pressure should be exerted on fast fashion companies if we want them to only sell garments made in factories where workers receive a fair wage and conditions.

The argument is that the pressure on public companies to deliver growth and higher profits quarter after quarter means they can often compromise long term sustainability in the pursuit of improving numbers in the short term. Indoctrinated by the belief shareholders will jump ship to a more profitable rival unless returns are maximised quarter-on-quarter, boards and management work against the long term interests of the company and the investors whose favour is sought.

ESG advocates believe a lack of sustainability will, in the long term, be worse for a company’s prospects and, by extension, shareholder returns. Investors themselves have to help break these bad boardroom habits of short-termism and, in the collective long term interest, pressure companies into being more sustainable, in everyone’s long term interest.

ESG standards cover the environmental impact of a company’s activities, its social impact defined its relationships with its workforce, the societies in which it operates, and the political environment. And finally governance, referring to the role and makeup of boards of directors, and the compensation and oversight of top executives.

A growing number of institutional investors set ESG standards they demand the companies they invest in meet before they acquire a stake in them on behalf of the customers whose capital they manage. And an increasing number of funds targeted at retail investors market themselves as ‘ESG funds’.

The term isn’t narrowly, or often even well, defined but implies capital will only back companies that meet sustainability thresholds, indirectly punishing those who don’t by making them less competitive in capital markets.

Institutional investors also often push for improved ESG commitment from the inside, leveraging their influence as key investors to enact improvements and changes in the sustainability of policy and culture.

There is another group of investors who accuse companies of taking their eye off the ball and neglecting shareholder returns at the expense of misguided pandering to woke ideals and pushing the political agenda of the leadership group.

While launching his strategy for Unilever last year, chief executive Alan Jope held up Hellmann’s mayonnaise as a brand with a purpose, telling investors “fighting against food waste — that is the purpose of Hellmann’s” .

“A company which feels it has to define the purpose of Hellmann’s mayonnaise has in our view clearly lost the plot.”

Consumer goods companies like Unilever have come under activist pressure, often supported by major shareholders, to reduce their environmental footprint. Smith claims that led to a Unilever leadership group

“obsessed with publicly displaying sustainability credentials at the expense of focusing on the fundamentals of the business”.

Last year the French food products company Danone saw its chief executive Emmanuel Faber forced out by activist investors who claimed he had neglected shareholder interests in his pursuit of what he advocates as “responsible capitalism”.

Marcho Taricco, co-chief investment officer at Bluebell Capital Partners was one of the activists that campaigned most vocally against Mr Faber. He commented:

“We fear that ESG [environmental, social and governance factors] has increasingly been used by chief executives to justify underperformance.”

“If you’re the CEO of a publicly listed company, your first priority should be to create shareholder value, striking the right balance between financial and non-financial targets. This was the message we delivered to Danone.”

A few days ago, Matthew Lynn, a columnist at The Telegraph newspaper, published an article titled The fightback against woke capitalism has finally begun.

“The special tax status of Disney World has finally been withdrawn after a row with the state government over gender issues. Elon Musk has called out the politically correct, sanctimonious programming at Netflix as one of the explanations for its sudden drop in subscriber numbers.”

“woke corporation, with its incessant virtue-signalling, its childish posturing and its endless, expensively publicised sermonising, is finally getting its comeuppance.”

He went on to assert:

“The only genuine social purpose of a private company is to make a decent product, at a fair price, and to pay its staff and suppliers on time. Everything else is just a distraction and it is time that the fightback began.”

“Elon Musk quite rightly pointed to dull, woke programming as one of the major problems at Netflix”.

He conveniently omits to mention the consensus view that the slowing growth and loss of market share that has hit the Netflix share price comes as a result of new competition from the likes of Apple TV+ and Disney+. Disney is, of course, another of the companies he said is suffering as a result of what he describes as its wokeness. And that Apple is also regularly criticised as a leading member of the left-leaning tech cabal commentators like Lynn perceive as trying to inappropriately influence the political landscape.

“and make sure that the board and senior management is not only filled with middle-aged white guys. That is just being good at running a company.”

What he doesn’t do is offer any concrete evidence that any issues the companies he mentions are facing come as a result of “ultra-liberal, activist capitalism”. At least, other than to speculate Disney’s Florida resort was stripped of its special tax status for publically stating its opposition to the state’s introduction of a law, dubbed the “don’t say gay bill” that bans classroom instruction on sexual orientation and gender identity for many young students.

If Lynn is correct in that supposition, shouldn’t the direction of his ire instead be the state’s governor Ron DeSantis, who it follows had waged a vendetta against private enterprise for expressing a politicised viewpoint counter to that of his administration?

Does the pursuit of ESG credentials hurt financial performance?

Is the pursuit of ESG credentials as a root cause of share price underperformance at Uniliver, Danone, Twitter, Disney and Neflix a red herring? Multiple Unilever investors publically stated their disagreement with Smith on that point. Quoted in the FT, Sébastien Thevoux-Chabuel, head of responsible investment and a portfolio manager at France’s Comgest, a small shareholder in Unilever commented:

“There is no denying Unilever has been lagging [behind] peers, but it’s a bit unfair to suggest that Unilever’s focus on sustainability is a smokescreen to hide its shortcomings.”

“From its early origins, a social purpose has been anchored in Unilever’s DNA. More than an undue obsession with ESG, Unilever has, like Danone, mostly suffered from unfortunate product categories and geographical exposure.”

Nestlé, on of Unilever’s main competitors, also rates highly for sustainability credentials after years of concerted effort to improve the company’s image after a number of scandals. Its ESG policies, not obviously materially different to those of Unilever, haven’t negatively impacted on its impressive performance for investors in recent years. It’s far easier to argue the opposite, that they have helped the company win back public trust. 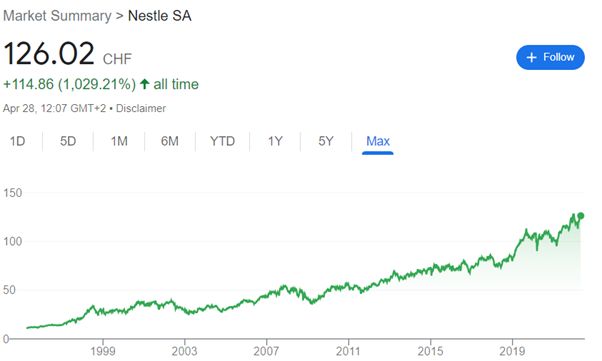 A 2017 article published by the FT opens with:

“Companies with better environmental, social and governance standards are more profitable and trade at a premium to rivals, according to research that shows responsible practices have a direct link to the financial performance of big businesses.”

The article goes on to detail how an analysis by the Boston Consulting Group covering over 300 of the world’s largest pharmaceutical, consumer goods, oil, gas, banking and tech companies found those with stronger ESG credentials were not only valued more highly than competitors (which could be dismissed as the result of a time-limited investment fad) but also made bigger profits – Mr Lynn’s sole criteria for a company’s performance.

Consumer goods companies seeking to conserve water, or minimise waste, it seems, actually improves returns for shareholders. The report also found that the valuations of oil and gas companies that had clear policies for combatting corruption, had better health and safety processes and attempted to limit environment damage traded at a 20% premium to those that didn’t. In the pharmaceuticals sector the premium for a strong ESG score was 8%.

While critics of woke corporations tend to link underperformance with perceived political stances and over-estimating the importance of ESG credentials, no attempt is ever made to present statistical analysis that back those claims up. On the other hand, Guido Giese, executive director of equity research at MSCI, the index provider says:

“What we can say now is that the impact [of ESG issues] on risk, volatility and valuation is clearly statistically significant.”

He means statistically significant in the sense companies with strong ESG credentials can be objectively shown to perform better.

That doesn’t necessarily mean these companies perform better financially as a direct result of pursuing better ESG credentials. But it clearly does show that they don’t perform worse. The tech sector that is the most common target of criticisms of wokeness has been the engine of the phenomenal growth in stock markets, especially Wall Street, over the past decade. It’s the direct source of the lion’s share of returns over what has been the strongest bull market in history.

Last year Schroders published a study that also showed companies with improving ESG characteristics outperform those with the inverse trajectory. 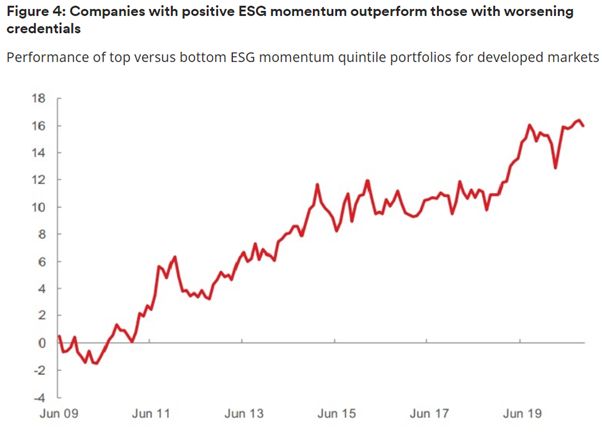 The conclusion has to be that there is plenty of data-based evidence to support strong ESG qualities improving shareholder returns. And, as far as I have discovered, none that supports the argument it is bad for them.

The view that corporations should not take political positions is a legitimate personal opinion. As is the opposite stance that they either should or there is no fundamental reason for them not to.

But in terms of the impact on shareholder returns, a corporation being accused by some investors of being too ‘woke’ doesn’t seem to have any tangible negative impact.