Traditional bricks-and-mortar retailers may be in dire straights but online-only fast fashion company ASOS has brushed aside the Covid-19 pandemic to announce it expects its profits to come in ahead of forecasts. More shoppers ordering online rather than in-store, fewer returns and gym clothes flying off the, warehouse, shelves, have all contributed to a bump in sales Asos now expects to come in 17% to 19% up on last year’s total of £2.7 billion.[optin-monster slug=”z0dpnwjsixpzcdk8vqmh”] 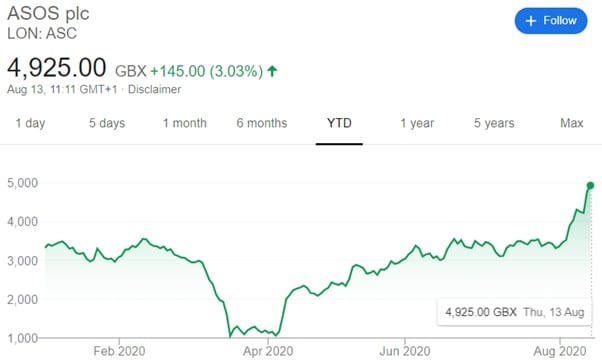 The Asos share price has risen by over 3% over today’s morning trading thanks to a new forecast for pre-tax profits at between £130 million and £150 million over 2020. That’s as much as four times higher than last year’s underlying earnings.

The Asos share price adds today’s fresh gains to a 13% rise yesterday, which took the company’s valuation to a two-year high. The turnaround is particularly welcome after the Asos share price slumped to £10.50 in March, at the height of the wider market sell-off. As an additional sweetener, Asos’s valuation has again surpassed that of younger rival Boohoo. The latter had overtaken Asos in recent months but is currently out of favour with investors following a scandal over the conditions of factory workers in Leicester making its garments.

Under normal conditions, around 40% of Asos’s initial sales are returned, but that has dropped over lockdown. However, the company does expect returns rates to return back to pre-lockdown levels when conditions normalise but for now rates have remained lower despite lockdown easing in the UK. Other online retailers have benefitted from a similar pattern. German peer Zalando also this week reported a “high-single-digit” drop in its returns rate.

“No question returns are a real cost for fashion ecommerce businesses and there is a structural tailwind from Covid-19 on this factor, but there remains a question as to how long this returns tailwind will be sustained. It is quite possible that much of this is one-off in nature.”

“Store-operating clothing and footwear retailers have had numerous unforeseen problems to contend with over the last few months, but, without the hindrance of physical locations, Asos has been able to focus on marketing and stocking its most relevant lockdown products, such as sportswear, loungewear and beauty.”

Asos’s success is indicative of a wider acceleration towards online fashion shopping. Market researcher Kantar published data that shows the extent of the shift. In pre-pandemic January, fashion shoppers spent £862.8 million online compared to £2.17 billion in-store. Over the four weeks to the end of June, £1.32 billion was spent online compared to £625.2 billion in-store. The overall spend on fashion is down over 28% on last year’s figures.