The Asos share price has recovered from a 2.5% loss in early trading today to swing to a 3.3% gain by the late afternoon despite the online fast fashion retailer publishing results showing a loss over the six months to the end of February. However, the company’s valuation is still down over 30% for the year-to-date.

The company posted a £15.8 million pre-tax loss this morning for the six months to February 28, compared to a £106.4 million profit for the same period a year earlier. The company’s performance over the six months from 2020 to the end of February 2021 was boosted by young shoppers denied access to high street fashion retailers due to extended lockdown periods in the UK over the pandemic. 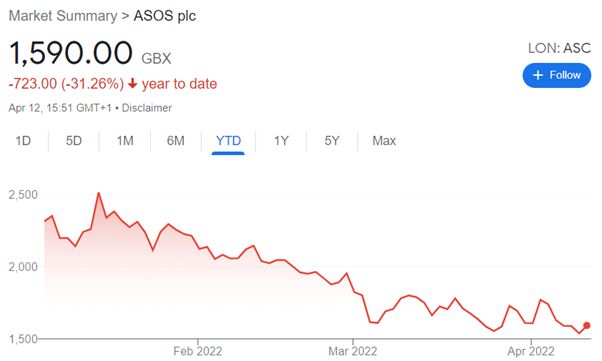 However, while the profit figure a year ago tripled thanks to the effect of the pandemic Asos has been unable to maintain that momentum after physical stores reopened. Adjusted pre-tax profits were also down 87% to £14.8 million from £112.9 million. Increased freight costs, logistics delays and higher wages for staff and increased manufacturing costs have also had an impact on the bottom line alongside slower demand. Returns rates, which dropped during the pandemic when more looser fitting loungewear was being sold, have also increased again.

Asos’s slowdown looks particularly pronounced against high historical growth rates. As recently as November the company told investors attending a capital markets day it intended to achieve growth of between 15% and 20% over the next three years. That already looks optimistic.

UK sales did, however, increase by 8% to £895.5 million and by 11% in the USA to £252.7 million but by just 1% in Europe with stock availability blamed. Across the rest of the world, sales dropped by 10% to £278.5 million due to long delivery times and pandemic restrictions easing in Australia allowing young shoppers to return to the Antipodean high street.

Asos does expect sales growth to improve over the second half of this year as summer approaches and shoppers buy outfits for holidays and events. But the fast fashion retailer also warned investors

“an increasingly challenging environment introduces a greater degree of risk that normal”.

Withdrawing from Russia is also expected to knock around 2% off full-year revenue growth, reducing it to between 8% and 13% overall. Adjusted profits are expected to take a £14 million hit.

Around £50 million was, however, saved over the half as a result of operational facilities but £86.5 million was also invested in automation technology in its warehouses in Lichfield and Atlanta in the USA.

The company is still recruiting for a new chief executive after Nick Beighton left the role last October over disagreements with the board on strategy. Asos also lost its chairman Adam Crozier to BT with Ian Dyson, formerly a senior independent director, taking over the position. Dyson told the Asos AGM that a new chairman would be selected once the chief executive role had been filled. He has been a director of the company for 9 years now, which he noted was not already incompatible with corporate governance best practice.

The company’s day-to-day running is currently being overseen by former finance boss Mat Dunn, who commented on the half-year results and future outlook today with:

“While much remains to be done, we have a clear plan for each of the three key pillars — our platform, consumer offer, and international expansion — and are already seeing positive signs of progress across the business.”