The Asos share price slumped by over 10% yesterday despite the online fast fashion retailer adding over 3 million new customers and quadrupling profits over its fiscal year. That the company managed to exceed analyst expectations with its financial results and still be heavily punished by the market was down to the company’s management offering a nervous outlook for the months ahead, with fears over the economic impact of a second wave of the Covid-19 pandemic. 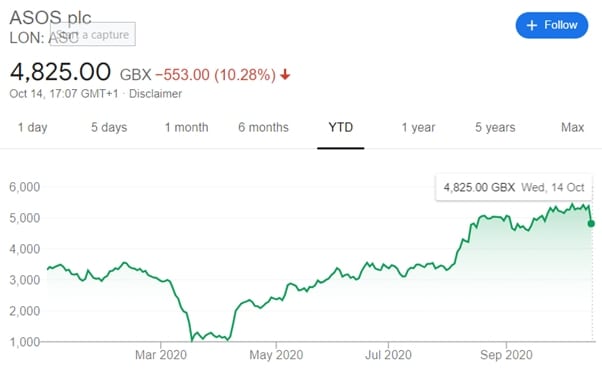 However, at least over Asos’s financial year to the end of August, the picture was rosy. A pre-tax profit of £142 million for the 12 months was an improvement of over 400% on the previous year’s £33.1 million.

The chasm in performance was down to a combination of sales that grew by 19% to £3.26 billion, helped along by the pandemic-induced lockdown that effectively shut down bricks-and-mortar retail competition for 3 months. Warehouse logistics issues also hit profits the year earlier, accentuating the variance in results between the two financial years.

However, the sheen was taken off the strong result by a cautious outlook delivered by chief executive Nick Beighton. Mr Beighton cast doubt on whether the festive season, when demand for outfits for the normal series of Christmas and New Year social events, would go ahead in any kind of normal form this year.

He said that before the mass availability of a Covid-19 vaccine, it was “clear that a normal pattern of social events is not going to resume in the short term.We are worried about how unemployment will fall on our twenty- something audience and how their lives may be disrupted.”

The market capitalisation of Asos is now, at £4.8 billion, approximately two and a half times that of Marks & Spencer, with the company’s share price having gained a little un 40% over the course of 2020. Asos, founded in 2000 by Nick Robertson, the grandson of the founder of the Austin Reed fashion label, is listed on the Aim junior market of the London Stock Exchange, rather than the main market.

The Covid-19 pandemic was yesterday credited by Asos as having added around £45 million to profits, in large part thanks to a steep decline in customer returns as shopping habits changed.

The company announced yesterday that against the backdrop of such strong results, it will repay £3 million in taxpayer-funded furlough scheme cash and government bounce back loans. However, commenting on governmental proposals for a 2% online sales tax, Mr Beighton insisted that he believed such a development would be“self-defeating for the government as the tax on online sales will be passed on to consumers”.

He also commented on the news Amazon is not obliged to pay the UK’s new digital services tax on products it sells directly, rather than through third-party sellers, calling the situation “uncomfortable”.

In “a nod to the potential impact of recession”, Asos is launching a new budget line named As You, items from which will be priced at between £8 and £28. Most items will be manufactured in the UK by suppliers the company says have been vetted. A reference to the scandal over poor and illegal working conditions found in suppliers to online fast fashion rival Boohoo.

Asos has also widened its ranges across sportswear, casual clothing and beauty and make-up lines in preparation for more time spent at home during lockdowns over coming months. These lines were both particularly popular over the spring lockdown period and also have generally lower return rates than those for smarter items typically worn in public.

An investment of between £170 million and £180 million will next year be made in a new fulfilment centre in Staffordshire, the company’s forth. £50 million of costs have been stripped out but the capital will be invested in technology that will allow orders to be shipped to Asos customers directly from the warehouses of third-party brands whose items Asos sells.