The Asos share price is up more than 2% over the early hours of trading today, following the fast fashion e-commerce outfit’s announcement it is raising its full-year profits guidance. An increase in sales over the four months to December 31 which the company said “surpassed our expectations”, has convinced it to raise its 2021 profit guidance to £170 million. Consensus analyst estimates had been for £141 million. 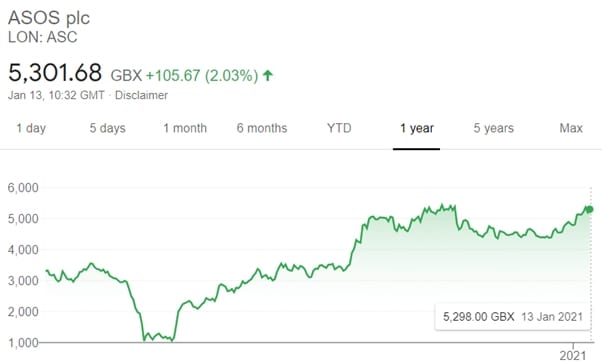 Lockdown restrictions and shut shops have benefitted ecommerce-based retailers. Especially those, like Asos, in the fashion sector. That saw the Aim-listed company announce a quadrupling of pre-tax profits to £142 million, for the 2020 financial year that ended August 31st.

Over the four months since then, to December 31, UK sales increased by 36% year-on-year, to £554.1 million. Total group sales, including international business units, grew 24% to £1.36 billion over the same period.

Despite the extremely positive sales growth, Asos did also caution that the continuing Covid-19 pandemic is expected to have a “likely economic impact on our core twentysomething consumer”.

However, it would appear likely that the general increase in ecommerce’s overall market share of the fast fashion retail sector will continue to overcompensate for that economic impact on Asos’s core demographic. Commenting on the announcement, chief executive Nick Beighton said:

“Our cautious outlook for the second half of the year remains unchanged. However, the strength of our performance gives us confidence in our continued progress towards capturing the global opportunity ahead.”

Asos was in 2000 by Nick Robertson. The company’s original name, which Asos is an acronym of, was As Seen on Screen. The company’s low cost, in trend lines have proved popular as ecommerce grew as retail sector over the 20 years since the company was founded, and international expansion has seen Asos’s valuation increase to £5.39 billion.

Despite the fact Asos is still listed on the junior Aim market of the London Stock Exchange, which comes with less strict regulatory and other requirements compared to a main market listing, the company is now more valuable than many FTSE 100 companies. The benchmark index is made up of the 100 largest companies by value, listed on the main exchange.

Asos has around 24.5 million active customers, a little over a third of whom are from the UK. The company sells a wide range of 85,000 fast fashion products, which include both those under its own label as well as third-party products from brands including Levis, Nike and Pull & Bear. The company launches hundreds of new lines a week, with its flexibility to quickly respond to the latest trends a major strength.

That allowed it to quickly change its focus to exercise clothing, loungewear and skincare when the Covid-19 pandemic struck. The rapid reaction meant that revenues lost in areas such as party dresses and more formal clothing were more than compensated for by sales in the newly popular product segments.

The sportswear, loungewear and skincare products Asos sells have lower average margins than those of ‘going out’ fashion lines. But the company said this was compensated for by a lower rate of returns for those segments. It is relatively common for customers to order a number of sizes and styles of more formal garments, keep those they like and fit best, and return the rest. But customers are more flexible with the fit of casual garments, and keep most of what they order. Pandemic conditions discouraging people from visiting the Post Office to return items is also believed to be a contributing factor to lower rates of ecommerce returns.

Lower rates of returns are expected to add at least £40 million to Asos’s bottom line over the pandemic period. Asos competitors such as Next and Boohoo have also highlighted the same positive returns trend over the past several months.

However, one cloud on the horizon was a warning from Asos that it would be hit with £15 million worth of new post-Brexit tariffs, related to country of origin rules, despite the company’s Berlin warehouse and sophisticated logistics operation. Fashion retailers will face new tariffs of around 12% when re-exporting products from the UK. This will mainly affect products shipped into the UK from outside of the EU, but then shipped on to customers in EU countries, like Ireland.