Iconic British sports car manufacturer has salvaged the rescue package it had recently agreed by slashing the issue’s pricing by a staggering 86% compared to its closing share price on Thursday. A weekend, coronavirus-driven, steepening of the sell-off that has seen the company’s share price lose around 90% since its IPO in the autumn of 2018 was anticipated. That forced the company’s board to act to save the company from extinction after the consortium behind an agreed rescue package threatened to walk.

The equity fundraising had been priced at 207p a share but was dropped to 30p a share to rescue the deal. That was necessary after recent market volatility led Aston Martin Lagonda to the conclusion it needed to raise the level of investment required by £36 million to £536 million. 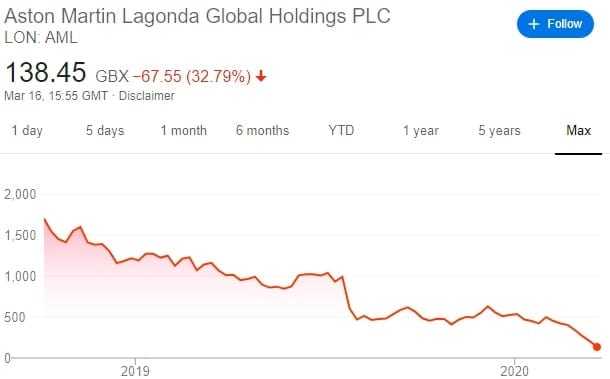 The drop in the issue price and amount being raised means the consortium led by Canadian billionaire Lawrence Stroll will now take control of 25% of the company, rather than the initially agreed 16.7% stake. The consortium, which includes the JCB diggers billionaire Lord Bamford activated a material adverse change clause, which meant it could walk away unless the price was renegotiated to reflect the worsening market environment.

One compromise that has been made is that the Stroll consortium has agreed to remove the clause from the new agreement, which means the price cannot be pushed down further. The value of the short-term loan to the group has also been boosted from £55.5 million to £75.5 million to provide essential liquidity. With the timetable for further fundraising now delayed, the extra £20 million will, it is hoped, keep Aston Martin going until market conditions allow it to go ahead.

A shareholder meeting to approve the funding had been scheduled for today but has been pushed back to March 30. Mr Stroll will take over from Penny Hughes as the group’s chairman.

A company statement, which put a brave face on what many investors will regard as an, if probably practically unavoidable in the circumstances, smash and grab, read:

“In light of recent extraordinary equity market volatility related to concerns over Covid-19, the company has renegotiated certain terms relating to the proposed investment.”

Aston Martin Lagonda is one of the few historic British car manufacturers to still build cars in the UK, along with Jaguar, Bentley and Rolls-Royce. However, with the other now under foreign ownership, Aston Martin is the London Stock Exchange’s only quoted car manufacturer. Aston Martin has already been bankrupted 7 times over its up-and-down 107-year history. Before Mr Stroll’s consortium agreed to come to the rescue two weeks ago, there were real fears the company would go bust for an eighth time.

The company has wagered its future on the launch of its first SUV, which is due to go on sale this summer for around £158,000. It will go head-to-head with new off-road models released by other luxury brands including Bentley, Rolls-Royce and Lamborghini. With 2019 sales down 9% to just 5892 cars generating revenues of £876 million, down £100 million on 2018, and pre-tax losses growing from £68 million to £104 million, strong sales numbers for the SUV are a must. The company has stated that production has not been impacted despite some disruption of component supply lines from China.

The total capital now to be raised will be made up of the £171 million share placing with the consortium alongside a £365 million rights issue for existing shareholders. Mr Stroll says his consortium’s total bill to acquire the 25% stake and take up of its full rights will eventually mean a “long-term capital investment of £262 million” and showed its “commitment to provide the company with the necessary funding it needs to manage through this period, to reset the business and to deliver on its long-term potential”.

Himself a sports car fanatic and owner of several Aston Martin cars, Mr Stroll believes that the experience and expertise in marketing luxury brands that he will bring will ensure a long term return on his investment by reviving the iconic brand.